Memoranda of understanding have yet to be signed that would grant $500 to vaccinated city employees. (Spectrum News, Pete Grieve, File)

COLUMBUS, Ohio — Following the recent deaths of three first responders who contracted COVID-19, the City of Columbus said unions are holding up a $500 vaccine incentive for city workers that could help get more people vaccinated, but labor representatives said that’s not the full story.

Mayor Andrew Ginther’s office directed an inquiry about the status of the vaccine incentive to the Human Resources Department. Director Nikki Brandon said in an interview that the city has offered the incentive to all City of Columbus employees who show proof of full vaccination by Dec. 1.

Of the six unions representing more than 9,000 full-time employees, only two with fewer than 300 members combined have approved memoranda of understanding necessary for employees to get the incentive, according to union leaders and city officials. The MOUs were sent on Sept. 17, Brandon said.

“We are hopeful that other unions will sign the agreement, so that all employees can take advantage of this incentive,” Brandon said. “I personally don't know what the downside would be. This is not a mandate. This is the mayor's way of offering an incentive to hopefully give employees an extra push to make the decision to get vaccinated.”

The two approved agreements were between the city and the union representing about 214 Columbus Public Health employees, American Federation of State, County and Municipal Employees Local 2191, and the union that represents about 64 employers who are crime analysts, forensic scientists and a few other positions, the Fraternal Order of Police Ohio Labor Council.

The latter agreement was approved by City Council on Oct. 11 and signed by Ginther the following day.

The MOU stipulates that every member of the union hired on or before Jan. 29 will receive $500 of “hero pay,” and those who are fully vaccinated will receive an additional $500.

President of the Columbus Public Health union Jamie Shumaker said their MOU was approved through a slightly different process in September because the department is the only one in the city with a vaccine mandate for employees.

The reason the other unions have not yet signed on to the agreement stems back to City Council’s approval in late July of an ordinance authorizing payments to some frontline employees of up to $1,000, according to a union source, who requested anonymity to discuss private negotiations. City Council gave approval for up to $7.1 million from the American Rescue Fund to support the payments. 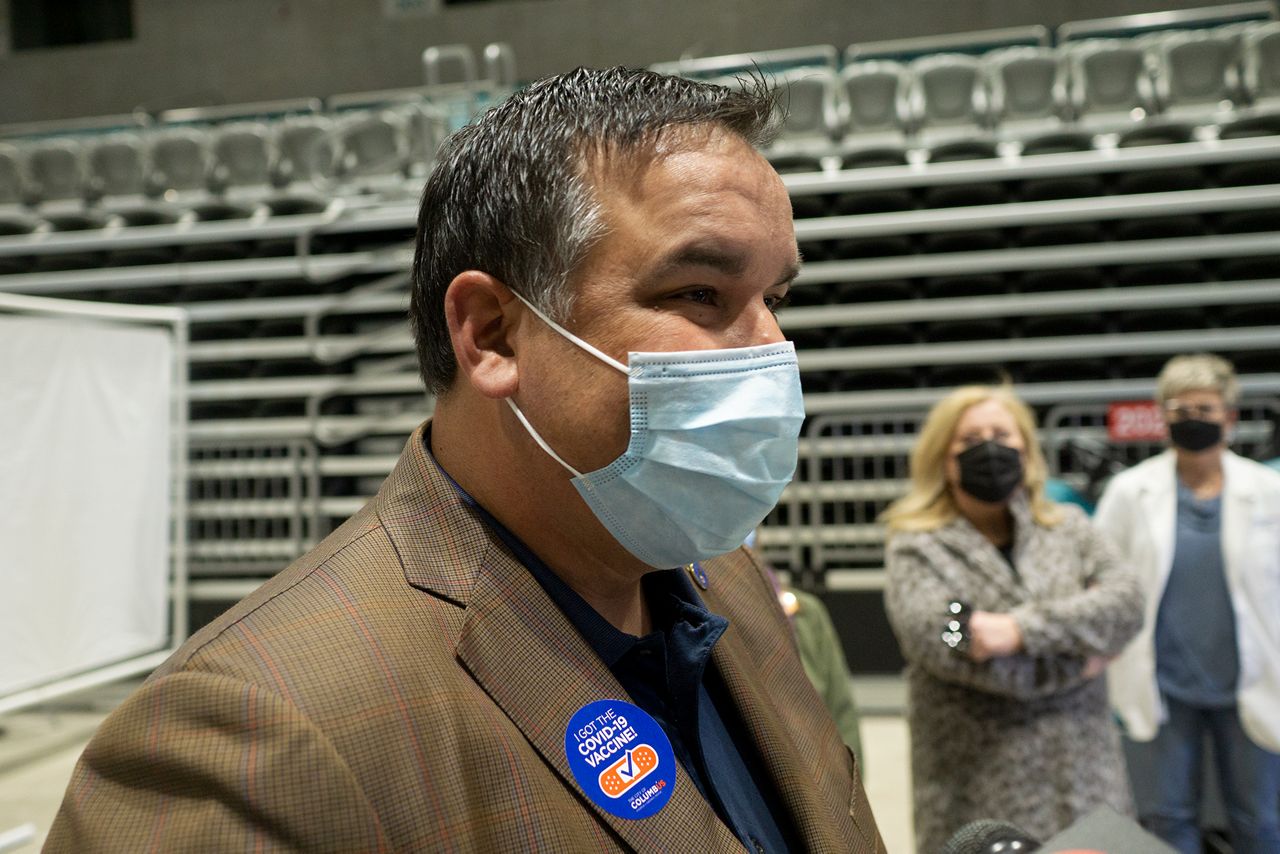 Mayor Andrew Ginther does not want to mandate the vaccine for employees, Brandon said.

"Council intended us to get $1,000 for the hero pay. When the MOU came over, it was $500 for the hero pay and $500 for the vaccine,” the source said, stressing that none of the unions oppose vaccine incentives. “The legislation says they can pay you ‘up to’ $1,000, but every discussion that was had was that it would be $1,000 full for hero pay.”

“The Columbus Fire Fighters Union is in full support of existing legislation passed unanimously by Columbus City Council to pay our Fire Fighters, EMTs and Paramedics for being on the frontlines serving our community throughout the entire Covid-19 pandemic,” Stein said. “We would also be more than willing to collaborate with the Mayor’s Office on any additional incentive programs that may encourage others to get vaccinated.”

He said the full hero pay should go to those who reported to duty before vaccines became available, many of whom have been on the frontlines since the initial shutdown 19 months ago. The city’s proposals no longer differentiate between those who work on the frontline, and those who do not — all union members would be eligible for the payments.

Stein said he is hopeful the parties will ultimately come to an agreement, especially because the fire department has lost two firefighters to COVID-19 in five weeks. “Nobody wants to get through this thing more than us,” he said.

The Fraternal Order of Police Capital City Lodge 9 did not respond to a request for comment about their position on the city’s proposal.

Columbus Police Officer James Strozyk, 49, died of COVID-19 on Oct. 14. The City of Columbus doesn't require employees to be vaccinated. Officials have not said the vaccination status of Strozyk or the two deceased firefighters, 56-year-old Greg Bauer and 66-year-old Frank Duff Jr.

Stein said that the majority of the firefighters union's members have been vaccinated since early spring, but precise numbers are not available.

The other unions did not comment for this story. Those include the Communications Workers of America Local 4502 (professional, technical and supervisory workers) and American Federation of State, County and Municipal Employees Local 1632 (Public Service, Public Safety and Public Utilities departments).

Shumaker said the Columbus Public Health MOU secured $1,000 payments with the $500 vaccine incentive in addition to the payments. The union held a vote, and 97% of members supported the MOU. The $1,000 payments went out on Thursday after the city adopted the MOU on Sept. 21, she said.

“I was told when I received my MOU that our union will be the only one that receives $1,000,” she said. “I think it’s because we're Columbus Public Health and our workers have been working the whole time, which I believe fire and police have been too — personally, I feel like all the unions deserve the $1,000 for essential workers.”

Michael Brown, chief of staff for City Council President Shannon Hardin, explained that while councilmembers approved the $1,000 bonuses for frontline workers, the council is not part of the negotiations with the labor groups.

“The Mayor’s Administration and labor groups have to work through the details to create an MOU outside the existing contracts to provide the bonuses,” Brown said. “The Administration will let us know after they negotiate, because Council then does vote to accept the MOU and release the funds.”

Brandon said discussions are ongoing, but no formal bargaining sessions are scheduled this week.