First People’s Day is hoped to help educate residents while honoring and preserving the history and culture of Native Americans. (Courtesy of Charlotte Gintert)

AKRON, Ohio — North American First People’s Day in Summit County will be celebrated this year through a series of events honoring the people who first occupied the land in parts of northeast Ohio.


Observed as the first Monday in October since it was recognized by Akron City Council in 2018 and Summit County Council in 2019, First People’s Day is celebrated over several days.

The idea grew from an exchange-relationship the students at Akron’s Lippman School developed over the years with the Northern Cheyenne Nation of Montana. Each year, a walk of the ancient trail known as the Portage Path is held, honoring the early people.

The Portage Path, connecting the Cuyahoga and Tuscarawas rivers, was at the center of Native American activity in this region, said Akron historian Dave Lieberth.

“This was a place that many native people traveled through to get from Lake Erie to the Ohio River, but this was also a great source of food,” he said. “So it was not a place where native peoples settled. They came through and they picked from all the huge stands of nut trees that we had, fruit trees that we had, and shoots in the spring that grew out of the Cuyahoga River, which was some of the first foods after the deprivations of a winter, for example. So that is the nature of our history.” 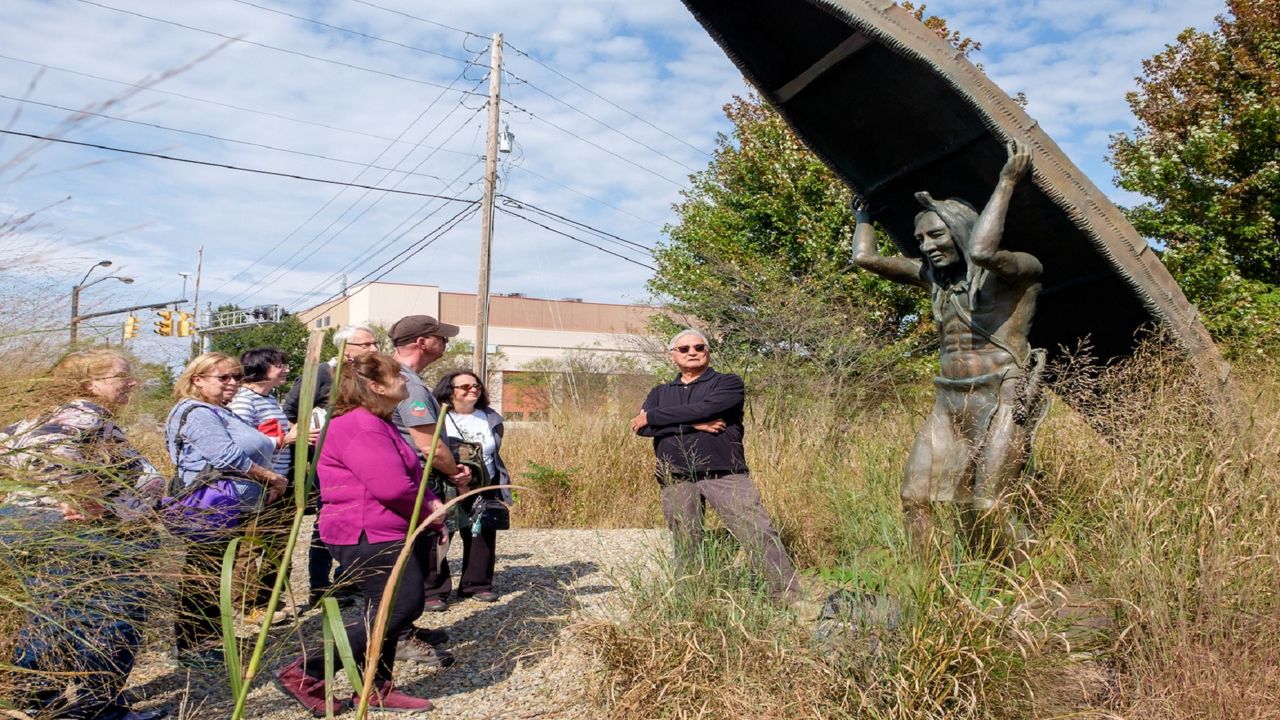 The annual series of events is hoped to help educate residents, while honoring and preserving the history of the region’s First People, organizers said.

Lakota Wiá, a new exhibit, opens at the Institute for Human Science & Culture at the University of Akron Cummings Center for the History of Psychology, 73 S. College St. The free exhibit features work of Cuyahoga Falls artist Claire Heldman (Cheyenne River Sioux Tribe, Eagle Butte South Dakota). Her work has been shown in galleries throughout the United States.

Summit Metro Parks presents a guided walk on the Towpath Trail, beginning at the Big Bend Trailhead in Sand Run Metro Park at 1337 Merriman Road. The walk ends at the northern terminus of the Portage Path. The walk features a talk by sculpture and potter Peter Jones (Onondaga/Seneca), who created a larger-than-life sculpture of a Native American man portaging a canoe in the Merriman Valley.

Jones, who lives and works on the Alleghany Indian Reservation in New York, graduated from the Institute of American Indian Arts in Santa Fe in 1965. He has been honored with national awards recognizing his commitment to perpetuating Haudenosaunee (Iroquois) traditions.

In-school activities will be held during the school day Monday, sponsored by the Portage Path Collaborative, a group comprising the Summit County Historical Society, Lippman School, Summit Metro Parks, Akron Public Schools, the Akron-Summit County Public Library and the University of Akron. Activities include talks by Native American artist Peter Jones and a “teach-in” with appearances by Indian nation representatives.

Contemporary Issues of the Native American Community panel discussions will be hosted at the Akron-Summit County Public Library in the main auditorium at 60 S. Main St. and via Zoom. One live panel will focus on the importance of preservation of American Indian History and Culture through art, music and dance.