Chestnut Street Cemetery in the West End neighborhood of Cincinnati, Ohio. The space was built in 1821 and closed to burials in 1849. The local Jewish community rehabbed the space and surrounding area. A rededication took place in September 2021 (Casey Weldon | Spectrum News 1)

CINCINNATI — Greg Landsman knew his family tree had strong roots in Cincinnati. But he didn't realize just how deep they went until not too long ago.

Landsman, a city council member in Cincinnati, recently learned that he is related to David Israel Johnson, who moved to the area in 1818 with his wife, Eliza.

In addition to being a trailblazer, Johnson is credited with being one of the first Jewish people to settle in Cincinnati.


Johnson was part of a group that bought a plot of land in the West End that became Chestnut Street Cemetery in 1821. It was the first Jewish cemetery, or any Jewish institution, west of the Allegheny Mountains. 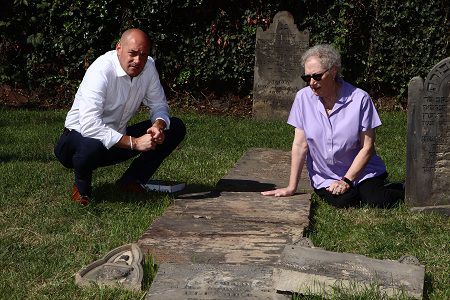 Johnson is buried there.

"Just knowing that I'm part of this really rich, important part of this city's history is remarkable," Landsman said Sunday during the formal rededication of the cemetery. The event also served as the kickoff of the Jewish Cincinnati Bicentennial, marking 200 years of Jewish life in the city.

Landsman learned of the blood connection to Johnson from his mother, Dr. Lee Hamill. A longtime teacher, Hamill found out the information while writing a book on her family history and its connection to the Queen City.

The book, "In the Mix: Stories of My Family,” is available at the downtown Cincinnati library as well as several local Jewish institutions. Landsman said that includes Isaac M. Wise Temple on Plum Street where he's a member.

The synagogue is a few blocks from Chestnut Street Cemetery.

"Knowing your history, knowing and appreciating where you come from is so important," Landsman said. "Today wouldn't be possible without the people who came before you."

While the creation of a small, approximately 100-plot cemetery may not seem like a huge deal, it represented the establishment of a Jewish life in Cincinnati. At the time there were no temples or rabbis in the area. There weren't Jewish social service providers or Kosher butchers.

“The creation of the cemetery really represents the birth of an organized Jewish community and the establishment of a Jewish way of life in Cincinnati,” said David Harris, executive director of Jewish Cemeteries of Greater Cincinnati (JCGC).

For that reason, 1821 is considered to be the official birth of an organized Jewish community in Cincinnati.

The cemetery is key to Jewish life

The earliest Jewish settlers to the Cincinnati region were connected to each other mostly through familial relationships but some were unconnected.

What existed was a disparate group of about six Jewish families in Cincinnati between 1817 and 1821.

Johnson's family relocated to the United States from Portsmouth, England. He ended up in Cincinnati at the urging of his friend Joseph Jonas, also from England. Jonas is widely considered to be Cincinnati’s first Jewish settler in 1817.

The relocations happened only about 30 years after Cincinnati was formally founded in 1788.

In 1821, Benjamin Lieb — who had not been living his life openly as a Jew, but knew these other Jewish family members — made a deathbed request to create a Jewish cemetery so that he could be buried in consecrated ground. 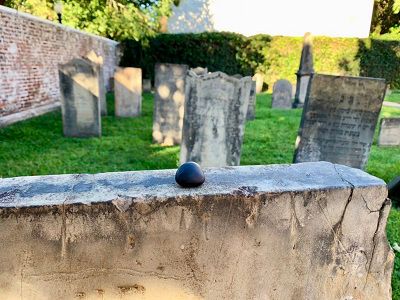 A pebble or stone placed atop a grave marker in Chestnut Street Cemetery in Cincinnati, Ohio. Placing a stone on a gravestone is a popular tradition in Jewish culture. (Casey Weldon | Spectrum News 1)

The establishment of a cemetery is one of the things that is traditionally done first, when establishing a Jewish community. Harris attributed that to the Jewish faith tradition placing such a high value on the commandment to honor the dead.

"It's sort of like if you can't do that, you really don't have a community," he said.

Harris said the cemetery is traditionally important given how "tenuous" life can be.

"Literally, someone could pass away at any time. Having the ability to perform that commandment to honor the dead and have a Jewish burial ground was really key," he added.

Jonas, Johnson and the other families secured land from Nicholas Longworth, a prominent local winemaker and banker, to establish the cemetery on Chestnut Street near the corner of what later became Central Avenue. And it was from there that they came together as a community.

In the Jewish tradition, graves are rarely disinterred, so when a cemetery is created, "it's there in perpetuity," Harris said. He called it a "statement" that a community plans to be there for the long term.

The cemetery closed to new burials around 1849 when a cholera epidemic led to the remaining plots quickly filling up.

Now, the space has been updated with new signage and a plaza with a Star of David brick mosaic that will eventually include seating. On the day of the rededication there was a deep tub full of stones so family members, or those who simply want to pay their respects, could place one on a grave marker.

Visitors to Chestnut Street Cemetery will also be able to learn about the early settlers on an official Ohio Historical marker revealed during the event.

200 years of Jewish life in Cincinnati

Landsman and Dr. Hamill were among the hundreds in attendance Sunday for the rededication ceremony. They were joined by various members of the local Jewish community, religious leaders and representatives of the West End community council. 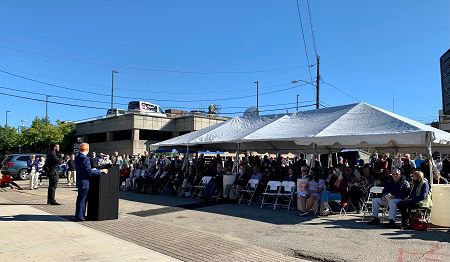 Officials with the community council said they saw the development of the cemetery as a beautification project that benefits the entire community.

But beyond the dedication itself, the event served as the official kick off of the Jewish Cincinnati Bicentennial. Organizers concluded the two-hour service by walking over to nearby Washington Park in Over-the-Rhine for the Ish Festival.

Those in the procession were led by the sounds of a Klezmer band, a musical tradition of the Ashkenazi Jews of Central and Eastern Europe.

The festival is a grassroots effort to showcase Jewish arts, culture and community. Now in its third iteration, Ish has grown to serve wider populations and has deepened engagement beyond the festival itself. The headlining event Saturday night was a performance by Matisyahu, a renowned Jewish reggae singer and rapper.

"This whole thing is about connection; not just to David Johnson, but to a whole host of others who made these enormous contributions to the city," Landsman said.

Landsman alluded to people Joseph Strauss, the chief engineer for the Golden Gate Bridge; famed scientist Albert Sabin, who led the development of the first oral polio vaccine; and Rabbi Sally Priesand, who became the country's first female rabbi in 1972 after being ordained in Cincinnati by Hebrew Union College-Jewish Institute of Religion.

"It's when you start to look at people like that, to see all that they've accomplished and given to us, that you really start to realize that there's these amazing stories of people that you're related to by blood and/or your faith," he added.

The events this past weekend start a 14-month celebration of the history, culture and contributions of the local Jewish community to Cincinnati.

The list includes more than 50 events ranging from genealogy exercises and history lessons to concerts with the Cincinnati Ballet and art exhibits.

The calendar in early October includes several events with the Cincinnati Symphony Orchestra.

More events will be added throughout the year, according to Tamara Harkavy, co-chair of the bicentennial celebration and chief development officer of the Jewish Federation of Cincinnati.

“We are excited to get a chance to celebrate, educate and bring people into the tent around Jewish contributions to the city,” said Tamara Harkavy, co-chair of the bicentennial celebration and chief development officer of the Jewish Federation of Cincinnati.