Afghan refugees are processed inside Hangar 5 at the Ramstein U.S. Air Base in Germany Wednesday, Sept. 8, 2021. (Olivier Douliery/Pool Photo via AP)

Catholic Charities provides new life, opportunities to refugees from Afghanistan and around the globe

CINCINNATI — The United States is set to welcome an estimated 37,000 refugees who fled Afghanistan as the U.S. military pulled its remaining troops from Kabul last month.

About 850 of those Afghan refugees will relocate to Ohio over the next several months. It's estimated that 50 will come to Greater Cincinnati.

Most refugees will never be able to return home. They'll have to set up a new life in a far away country that most of them have never been to and where many don't know anyone.

The federal government has assigned eight agencies across the state with assisting the refugees with resettlement. Tasks range from short-term goals, like finding them appropriate housing, to bigger-picture things like education and job training.

Catholic Charities Southwestern Ohio is one of those organizations.

The nonprofit, which is associated with the Archdiocese of Cincinnati, has relocated 12,000 refugees to the region since 1980.

Refugees have come from countries such as Vietnam, the Democratic Republic of Congo, Bhutan, Syria and Eritrea. They've only had a few from Afghanistan so far.

What is a refugee?

The United States welcomes thousands of refugees each year, but not everyone gets accepted. A person needs to face or fear violence or persecution because of their race, religion, political affiliation, or things of that nature.

In most cases, refugees can never return home.

Examples of situations that may qualify include: Imprisoned and tortured political dissidents or supposed undesirables; fired on protesters; committed genocide against a certain race; or made sure that members of a certain religion were left out of the political process.

Even then, the U.S. government will go so far as to say those situations will generally qualify a person for refugee status.

To resettle in this country, a person must receive a referral to the U.S. Refugee Admissions Program (USRAP), from the UNCHR for consideration. Then, they have to go through background and security checks and medical assessments. That part of the process takes at least 24 months. But the entire process takes much longer.

On average, refugees wait 10 years before they are relocated. Less than 1% ever resettle in another country, according to Catholic Charities.

For the 37,000 Afghans currently being resettled in the U.S., the timeline is likely much shorter — though it could still take months.

In 2006, Congress first authorized a bipartisan humanitarian program to provide Special Immigrant Visas (SIV) for Afghans and Iraqis, which included resettlement services and legal permanent residence for the applicants and their families.

The White House recently announced the emergency relocation of tens of thousands of additional Afghan SIV applicants in light of the Taliban's takeover of major cities in Afghanistan.

The first 30 days are important — but so are the months and years that follow.

Catholic Charities Southwestern Ohio started planning for the arrival of new Afghan refugees as soon as President Joe Biden made his comments in August.

"Our No. 1 priority is securing permanent housing that is safe, affordable and appropriate for the size of the family,” said Anne Scheid, director of Refugee Resettlement Services at Catholic Charities.

Some refugees know people in the U.S. and can relocate to where their friends and family are. Their families will often assist them with finding housing. That will likely not be the case for the newly arriving Afghan families.

Since 2016, only five families from Afghanistan have gone through the formal refugee resettlement process, according to Catholic Charities.

When looking for housing, Scheid said they look for properties that are not only accessible and affordable but also, if possible, offer the benefit of having people of the same or similar culture in the area.

Tony Stieritz, CEO and executive director of Catholic Charities, said a lot of times those decisions are based on existing connections.

"A lot of families are going to end up going wherever they may have U.S. ties or family in a particular area. That's where we're going to see most of those evacuees end up," he said. "Most of whom we will resettle in Cincinnati will likely be people with no particular U.S. ties. We have a small Afghan community in Cincinnati, many of whom we've resettled over the years."

Refugees are given a cultural orientation before they resettle. Some Afghan families are likely going through that process now or will in the next several weeks.

Catholic Charities aims to make introductions with refugees as soon as possible. Stieritz said technology helps establish a relationship, but in-person contact as soon as that person or group of people arrives in the city.

Tara Dahal, a refugee from Bhutan, now serves on Catholic Charities' board of directors. He still recalls meeting his caseworker, Megan, at the airport in Denver, Colorado where he was initially relocated.

"The first component of any resettlement process is literally meeting them when they walk off the airplane for the first time and step foot in the United States to their new lives," Stieritz said. "We welcome them. We provide them all the necessities that they need to survive in those first few days."

Stieritz said after the airport, the group will drive to the family's new home to show them around and enjoy a home-cooked meal consisting of familiar dishes from back home.

They’ll spend the next few days getting to know their new neighborhood, meeting their neighbors and having their first experience of American life. They work with various organizations, such as food shelters, language services and health departments, as well as other nonprofits, to help get through the process.

With the essentials out of the way, Catholic Charities moves on to helping them adapt to their new situation. That includes everything from getting them smartphones and teaching them how 911 works to showing them how to shop at the local grocery store and taking them for a health screening.

That all happens in the first 90 days.

"It's an amazing amount of work that has to take place in those first few months to get somebody starting their new life here," Stieritz said. "We tap into a network of partners who want to embrace these newcomers with whatever they need as they resettle here. They have been fantastic to work with."

He added that after that initial period they'll go on to things like work programs, mentorship and language classes if needed.

"We try to really accompany the refugees on a much longer-term journey after their initial resettlement phase. We want to help them establish successful, fruitful lives in their new city," Stieritz said.

The number of refugees an area receives is based on a lot of factors, ranging from resource bandwidth to the population of an area.

Because Cincinnati's Afghan population is relatively small, Catholic Charities didn't expect to receive many refugees from Afghanistan. Columbus and Cleveland, which have much larger Afghan populations, are receiving more than two-thirds of the refugees.

Catholic Charities has been gearing up for the arrival of the Afghan refugees for months. But planning can only do so much. They are expecting about 50 people, but they don't know if those are families or individuals, or if there are any other special needs at this point.

They do know one family of eight has already started the process of relocating, but even in that case, they don't know when they'll arrive.

"We don't know a lot at this point. We could get 24-hour's notice that a family would be on their way. But typically, when a refugee family arrives, we might get two or three weeks' notice about that. But even then, that's not a lot of time," Stieritz said. 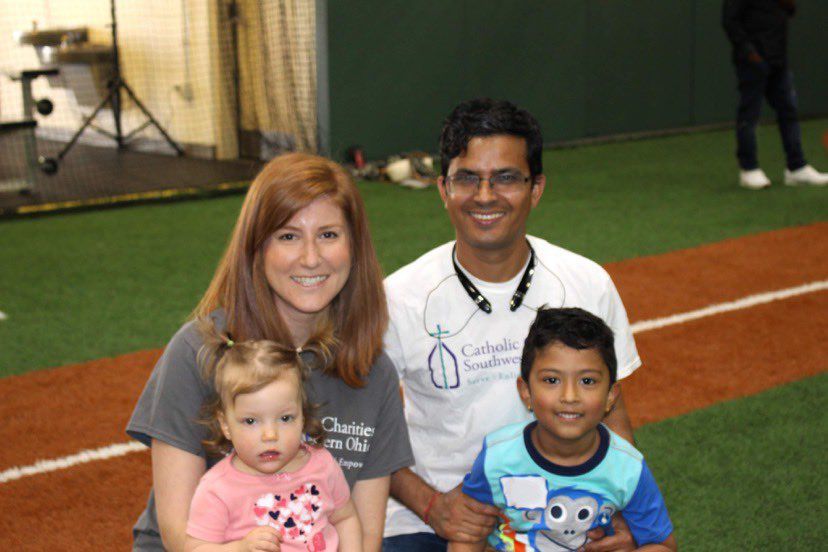 Catholic Charities does receive federal dollars and other support from service agencies to help administer the resettlement program and to assist refugees.

But they still need help — and a fair number of toothbrushes, pots and pans, clothing and other essentials as well.

"Resettlement requires a true community effort. Our goal is to provide refugees with everything they need when they arrive so they can become as self-sufficient as possible," Stieritz said.

One of the biggest issues is housing.

"It takes a lot of coordination. We always need people who might be willing to rent housing space," Stieritz said. "Housing is an issue already in our community, so we're always out there looking for good, safe and affordable options."

Catholic Charities also needs volunteers to help with things like setting up the new homes and providing transportation to and from appointments. Interpreters who speak Pashto or Dari are also in demand right now, Scheid said.

Relocating an entire family can be expensive and in most cases, refugee families have little more than the clothes on their back. Scheid said refugees are given a one-time government stipend of $1,225 per family member. The funds help them cover the first 30 to 90 days of living expenses.

Afghans with an SIV or those granted parolee status have authorization to legally work in the U.S. Catholic Charities will try to help them land a job or get work training. It is expected that refugees begin working as soon as possible.

"You know, these 50 refugees from Afghanistan are in addition to all the other refugees that are already in the pipeline that we need to be prepared to resettle," Stieritz said. "We are counting on partners and the community to help us welcome our new community members."

Those looking to help can also donate money to Catholic Charities, or provide gift cards to grocery stores and box stores to directly assist the families.

More information about the Catholic Charities Southwestern Ohio Resettlement Program and ways to help are available on the organization's website.