Whether it's gardening in her own yard or volunteering at the Cincinnati Zoo and Botanical Garden, she's spent a good portion of her 71 years on Earth appreciating all Mother Nature has to offer.

One of the West Price Hill resident's greatest passions is helping out with Cincinnati Parks' Fall ReLeaf Program. The project aims to improve the tree canopy coverage across Cincinnati. 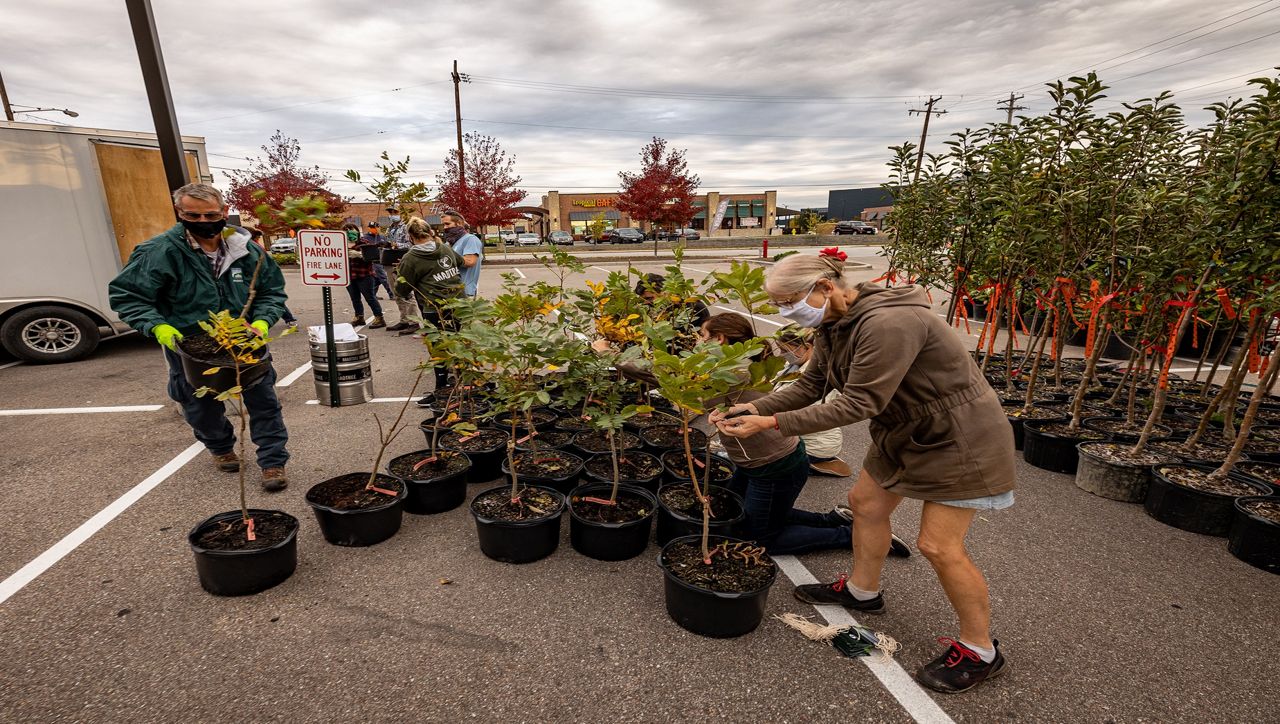 This year, Cincinnati Parks is giving away 1,700 trees. The program opened Saturday to select neighborhoods with limited canopy coverage. It will expand citywide on Sept. 4, if trees are still available.

Species include the eastern redbud, the sugarberry, the tuliptree, the pawpaw and the blue beech, which is sometimes called the musclewood or the American hornbeam. There are half-dozen other species on this year's list.

“We’re just great believers in this program," Bazeley said. "It’s such a fantastic program. You get a nice tree and it makes your yard look so much more beautiful."

Volunteers like Bazeley and her husband, Fritz, help plant trees of various sizes and species in neighborhoods across the city. Bazeley said they load trees in the back of Fritz's truck and deliver them to participating residents.

“My husband likes to joke that every time we plant a tree in a little old lady's yard, they offer him a Diet Coke. He never knows what to say because he doesn’t drink diet pop," she said laughing. "He actually just told someone that story the other day.”

The Bazeleys have taken part in ReLeaf each of the program's 33 years. During that time, Cincinnati Parks has given away, free of charge, 20,000 trees consisting of more than 40 species. 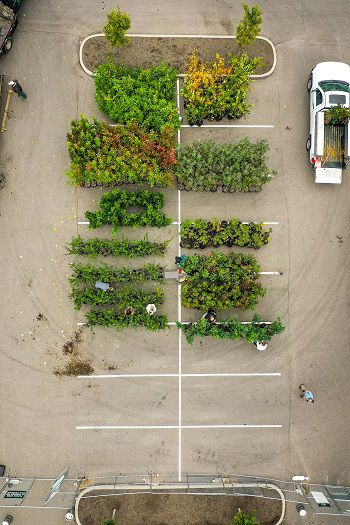 An overhead shot of trees at a ReLeaf pickup event (Provided: Cincinnati Parks)

The trees come in three different sizes: About 8 feet, between 25 and 30 feet, and much, much taller.

Bazeley planted ReLeaf trees in her own yard — a star magnolia and London planetree, which replaced a maple tree that had died. The London planetree is two-and-a-half stories tall.

“Right now, I have more trees than I know what to do with,” Bazeley said. Her yard is full and she also grows her own trees. She has a few growing in flower pots at her home right now.

“I think they’re going to go over to Dunham (Recreation Center) eventually,” she said.

The ReLeaf program has blossomed to include community and school involvement, a more diverse tree species selection and backyard planting.

"I put in three pansy redbuds there and a serviceberry at Carson Elementary," she said.

A tree canopy can have numerous environmental benefits, like reducing summer peak temperatures and air pollution. It can also enhance property values and make yards and neighborhoods more attractive.

Studies show trees can have health and stress relief benefits as well.

“It’s a night and day difference. A community with trees is so much more pleasant. To start with, walking on the sidewalk is less hot. When you go down a street with no tree canopy or very limited canopy, it’s hot, you’re in the bright sun, and it’s not as pleasant,” she said. “And you will not have any cicadas."

Bazeley took a special interest in talking about the branches of her tricolor European eeech where the cicadas laid their eggs.

Her daughter and her children came down from New Haven, Connecticut this spring to check out the 17-year cicadas. She had three different species of cicadas on her property.

Because of the importance of tree canopy, Cincinnati Parks wants to make sure there is equitable coverage across local neighborhoods.

Cincinnati Parks said the program was established to provide shade trees for homeowners whose curb lawns are too narrow for tree planting or for those with overhead utility lines. 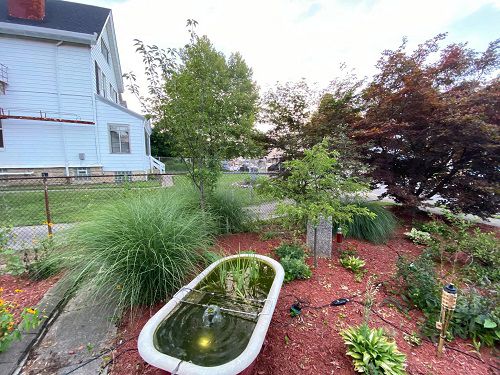 A photo of a yard that had a ReLeaf tree planted (Provided: Cincinnati Parks)

In addition to being a trained arborist, DiBona is a GIS analyst. He helped Cincinnati Parks perform a tree survey of all Cincinnati neighborhoods.

“It gives us an average of where we can create canopy and where canopy is already healthy enough, so we focus on areas where we know there’s room for improvement and growth," he said.

DiBona said Cincinnati Parks breaks down canopy goals into three sections. They aim for 25% coverage in mixed residential/commercial areas and 10% in the downtown core. But for largely residential areas, they shoot for 40% coverage.

While overall coverage in Cincinnati is healthy, DiBona said there are various areas spread across the city that need additional help.

Cincinnati Parks is now accepting applications for trees from residents in 20 neighborhoods below that 40% mark.

DiBona said Oakley is the perfect example. While it has a lot of trees in the residential parts of the neighborhood, there are also a lot of treeless industrial spaces which affects the overall canopy coverage.

"In Oakley, the canopy is very low compared to Hyde Park or Mount Lookout, so what we want to try to do is focus the trees going in the ground to increase that canopy coverage in relation to other neighborhoods in the area," he said.

Oakley is the home of MadTree Brewing, which is sponsoring the Fall ReLeaf for the second year in a row. Other sponsors include Macy's and the Cincinnati Parks Foundation.

Additional information about the Fall ReLeaf program is available on the Cincinnati Parks website.