CINCINNATI – When Susan and Michael Jorgensen bought a rambling, older house in Cincinnati’s College Hill neighborhood last year, they knew it might bring a few challenges. After all, the home was built in 1913, and along with its historic charm, came the burdens of age.

What the Jorgensens didn’t expect, however, was learning their water line was made from lead. A toxic metal, experts say lead can have devastating effects on a person's health if they drink it over an extended period. 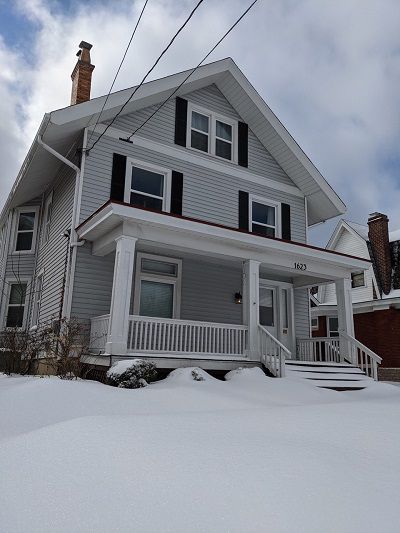 Susan Jorgensen said she had no idea their home had a lead service line. She said that it might have been listed in real estate documentation, but it wasn't something they were aware of.

"Our house is old,” Jorgensen said. “It’s not something we were actively thinking about before it came up in an emergency way."

A private contractor doing plumbing work at the home accidentally hit the property's water line. That's when they discovered the pipes were made of lead.

The Jorgensens feared the cost to replace the pipe would be too expensive. That’s when Susan Jorgensen did some research online and discovered Greater Cincinnati Water Works (GCWW) offered a cost-sharing program to handle that exact situation.

“I was feeling pretty hopeless at that point, and I didn’t know what we were going to do. But about 15 minutes after I made the call, I got a call back from someone at Water Works,” Jorgensen said. “They said, 'Hey, we can get you in right away because this is an emergency. So, just let the plumbers know we’re going to take care of this.'”

A Water Works employee stopped by that same day she placed the call to drop off filters. They also left literature about lead and why replacing the service line was important.

Jorgensen and her husband signed a contract with Water Works the next day, and the line was replaced within a week and a half.

Although the Jorgensens’ quick turnaround was unique given the emergency need for repairs, Water Works tries to get most replacements completed within a couple of months, said Leslie Moening, GCWW’s lead program manager.

Cincinnati is an old city and some pipes and service lines in its water system are more than 200 years old. The city has about 40,000 lead service lines still in operation, and GCWW is working to remove every last one of them.

For decades, Water Works – like other water utilities across the nation – built its service lines using lead. Service lines are the small pipes that connect houses and businesses to a water main that runs below the street.

During the second half of the 20th Century, it was discovered lead was harmful. It's especially dangerous to the growth and mental development of children aged 6 and younger but may also cause ailments in adults, like high blood pressure and kidney disease.

Congress banned the installation of lead pipes in 1986. At that time, there were nearly 10.2 million lead service lines, according to an American Public Media article. The report says that as of last year, up to 22 million Americans still cooked with and drank tap water from lead pipes.

Cincinnati stopped using lead in its service lines in 1927, yet there are still tens of thousands of homes and businesses across the city with service lines made of lead, per GCWW.

Filters can help protect against water contamination, but the most effective solution is replacing the lead pipes.

'HELP' is on the way

That's why Water Works launched its Enhanced Lead Service Line Replacement Program in early 2016. The program provides educational outreach to alert customers of potential risks and offers cost-sharing to assist with the replacement.

"We met with community leaders in all of Cincinnati's 52 neighborhoods and one of the things that we determined was for this program to be effective, we needed to make it affordable," Moening said. 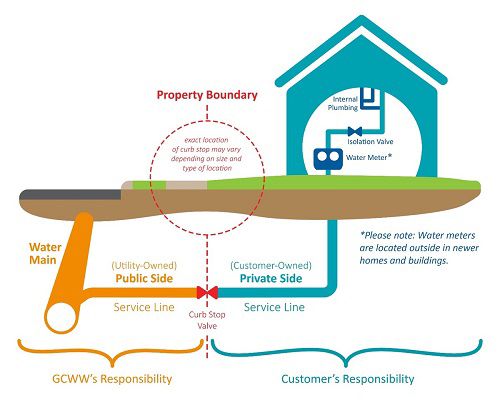 A graphic outlining the ownership of lead service lines (provided)

Cost-sharing is an essential part of GCWW’s program. While the issue is common throughout Cincinnati, many of the older neighborhoods where the problem exists also have large pockets of residents facing financial hardships.

Examples of neighborhoods with large concentrations of lead service lines include Over-the-Rhine, Northside, Westwood and the Price Hill neighborhoods.

"Some of the neighborhoods in greatest need of lead-line replacement are struggling with income inequality, as well,” Moening said. “Through this program, we're trying to remove the barrier of cost.”

GCWW, which is a city of Cincinnati department, pays for the program through water rates. The city had to change Cincinnati's municipal code and pass several ordinances to use ratepayer funds to allow infrastructure replacement on private property.

There are no public water transmission and distribution mains made of lead, Moening said, but many of the water lines serving individual properties are made from the toxic material.

About 14,000 of those lines remain on the public side. Moening said GCWW is working to replace about 3% every year through water main replacement and street improvement projects.

But the 40,000 or so on private property are more difficult to address. They require consent from property owners, many of whom don't even know they have lead service lines, Moening added. 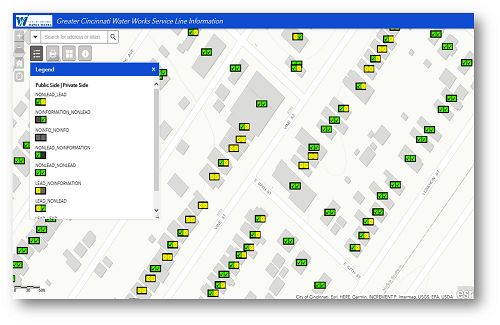 Residents can check the material of their service line using an interactive online map created by GCWW. The utility also offers free lead-testing kits and water filters to qualifying households.

For the Jorgensens, the total replacement cost was about $1,000, but after the cost-sharing, they only had to pay about $600 out of pocket.

While the final amount for the College Hill project was less costly than it could have been without GCWW's assistance, it’s still more expensive than many lower-income property owners can afford. And some replacement projects can be even more expensive.

For that reason, Water Works created its HELP program, which stands for Help Eliminate Lead Pipes. The program covers the total cost of replacement for households at 80% of the area's median income.

The money comes from fundraisers, including events at local breweries, as well as private donations from businesses and residents. Many GCWW employees have donated funds directly from their paychecks, too.

Since its creation in 2017, HELP has provided $264,000 to address service line replacement at 334 properties, Moening said.

It's not just homes that are affected. Businesses are also, including child daycare centers.

In September 2020, Gov. Mike DeWine and the Ohio Environmental Protection Agency provided GCWW with $725,000 in state funding to replace lead service lines at licensed child care facilities. The funds cover 100% of the cost of replacing the lead lines serving those properties.

At the time, Cathy B. Bailey, GCWW's executive director, said the grant will accelerate the agency's efforts to "protect infants and small children."

Records from Ohio Department of Job and Family Services show there are 185 licensed child care facilities in GCWW's service area.

Of those facilities, 39 have already replaced the lead service line using the grant money while another 29 are in the approval process, Moening said.

The first of those facilities is Cozy Care Nursery School and Childcare, located in Walnut Hills, a Cincinnati historic neighborhood with a considerable number of lead service lines.

Greg Windle, director of Immanuel Child Development Center in Clifton, said he found out about the program because of a mailing Water Works sent to childcare facilities.

GCWW had previously tested the center's water quality to ensure it was lead-free, Windle said. Although no lead was detected, the company's management decided to replace the service line because "it's a lot safer to have a new line than one that is maybe 60 years old," Windle said.

GCWW crews were at the Clifton facility for two days to run a line into the facility, he added. Windle said it wasn't disruptive to operations for the facility, or the roughly 40 children they serve on a daily basis.

"It was as easy as calling to set up an appointment. They showed up and did very little damage,” Windle said. “Whatever they had to dig up, they fixed for us. And it didn't cost us anything money-wise, so it was really a small price to pay to ensure everyone is safe."

Those interested in learning more information can visit Lead.myGCWW.org or call 513-651-LEAD (5323).