Why school mask mandates could be in jeopardy in Ohio

​Gov. Mike DeWine signed legislation this week that’s in the spotlight for a provision banning schools from requiring a vaccine that lacks full Food and Drug Administration authorization.

But another clause in the bill that prevents schools from discriminating against anyone who has not received such a vaccine could prove to be more disruptive to schools’ fall plans.

“House Bill 244 would prohibit some school mask requirements. What it does is it prevents discrimination, so you can't say, ‘OK, kids who are not vaccinated have to wear masks,’” State Sen. Andrew Brenner, who introduced the vaccine provision in an amendment, told Spectrum News in an interview.

Micah Berman, an associate professor of public health and law at Ohio State University, said he interprets the language the same way: When the bill takes effect on October 12, it appears schools will not be able to require masks only for unvaccinated students.

“It does seem to suggest that as long as we're in a world where the COVID-19 vaccines have not received full FDA approval, then you can't be imposing different requirements, including different public health precautions like masks, or testing or so forth on people who have not received those vaccines,” Berman said.

While only one public college in Ohio — Cleveland State University — has announced a plan to require vaccination, many colleges have mask requirements that only apply to unvaccinated students or have surveillance testing programs from which vaccinated students are excluded. These are the types of policies that HB 244 was designed to​ prohibit.

Several public universities in Ohio that could be impacted say they plan to keep their current policies in place but acknowledged they might have to make changes in three months when the law takes effect.

At the K-12 level, many school districts are not requiring masks or testing. However, there are some districts like Cleveland that are expected to maintain mask mandates in the fall.

Shari Obrenski, president of the Cleveland Teachers Union, said she had been closely watching the legislation, and she said the most likely outcome for the fall would be universal masking for everyone, which is allowed under HB 244.

“If the Centers for Disease Control and Prevention is saying that those who are unvaccinated still should mask, and the law says you can't distinguish, then everyone will mask, and I believe that's what will happen, and that's certainly what we would promote,” she said.

Brenner introduced a new bill on Tuesday that would ban schools from requiring masks, similar to legislation passed in Arizona, Arkansas and Oklahoma. The legislation, Senate Bill 209, would only allow health departments to initiate school mask requirements.

“No mask breaks, dirty masks being used over and over again, kids running around in a playground with a mask, I mean that's just ridiculous,” Brenner said. “I don't think that the masks have worked at all.” 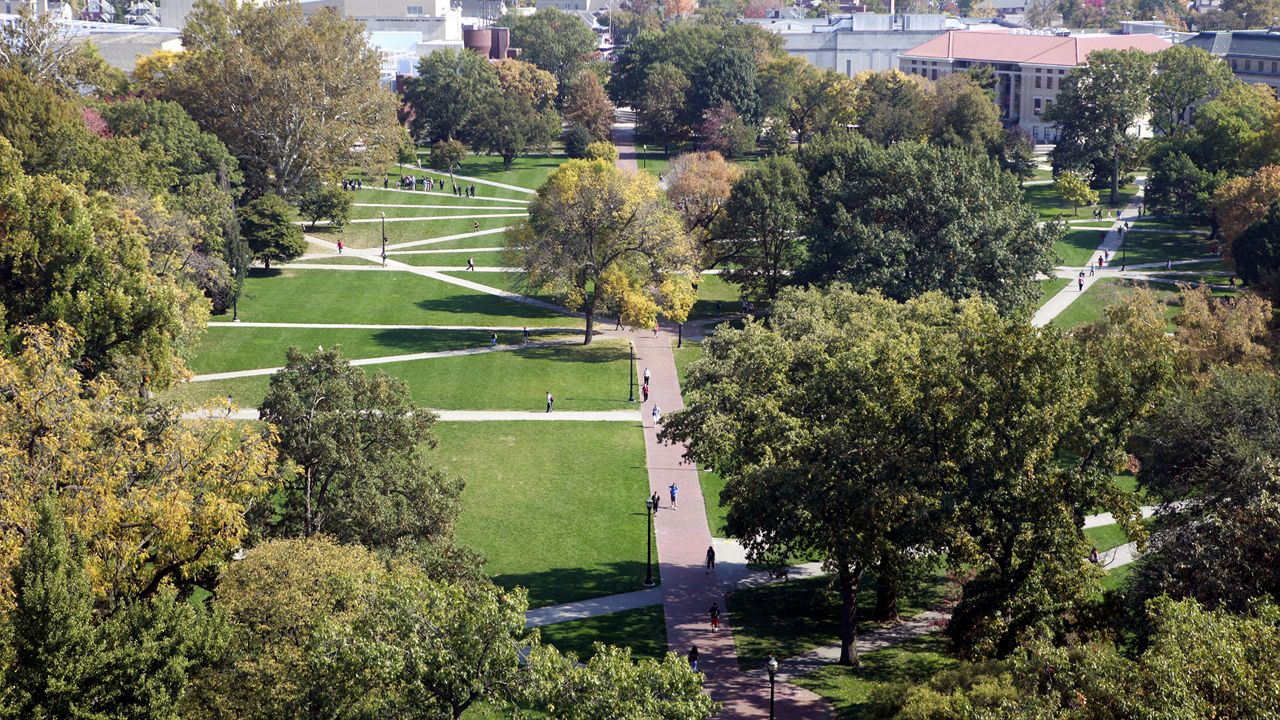 Ohio State University said it would be reviewing the implications of the new law during the 90-period until it takes effect. (AP Photo/Terry Gilliam/File)

Obrenski said it’s disappointing that matters of health and safety​ have become politicized regarding schools.

“It doesn't surprise me that this would be something that would be introduced in the state legislature. I know that we have districts, unions and families that would be opposed to the legislation and we would certainly make our opinions known about it," Obrenski said.

She acknowledged that some Cleveland families would surely object to a universal mask mandate, but she predicts that most in the district would support the move, especially if cases continue to rise in Ohio as the delta variant spreads, she said.

Ohio Attorney General Dave Yost announced Wednesday that his office would issue guidance on HB 244 so that schools know what they need to do to be compliant.

Ohio State University spokesperson Ben Johnson said the school is taking the 90 days before the law goes into effect to review its policies. The university will be prepared to comply with the new law in the fall, he said.

“As we have throughout the pandemic, we will work closely with state and local government partners and update our policies where appropriate based on the latest scientific data and public health guidelines and laws,” Johnson said.

Ohio University is evaluating its testing strategy and will be prepared to modify it should that be necessary, spokesperson Carly Leatherwood said, adding that school officials are hopeful the vaccines will soon receive full authorization. 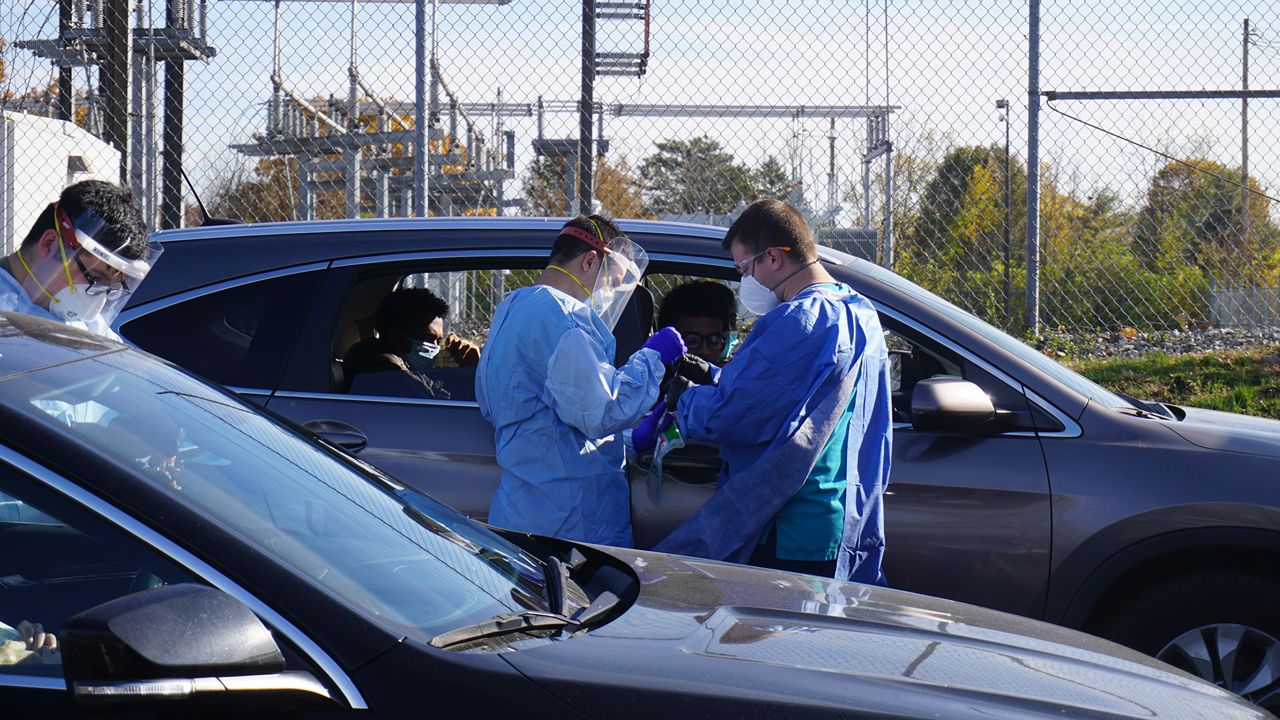 Policies that require unvaccinated students to participate in surveillance testing could be impacted by HB 244. (Spectrum News/Pete Grieve/File)

The University of Akron said it is taking a look at its policy, which exempts fully vaccinated individuals from wearing masks and having to distance, said Eric Green, director of environmental health and occupational safety.

Addressing the media at an event in Columbus Friday, DeWine said schools can still require back-to-school vaccination for COVID-19 because the bill takes effect after classes start.

The governor’s spokesperson Dan Tierney said DeWine signed the bill, which was passed by Republican majorities in the Ohio House and Senate because its primary purpose is to enhance educational opportunities for children in military families.

“The amendment was limited to vaccines that do not have full FDA approval. We are confident that these vaccines, proven repeatedly to be very safe and very effective, will be approved by the FDA, thus rendering this issue moot,” he told reporters earlier this week.

Berman said he was disappointed the governor signed the bill, which he anticipates would put Ohio schools in a difficult position to enforce COVID-19 precautions this fall.

The bill prohibits exactly the type of school mask policy that the CDC recommends for schools in areas with high transmission and low vaccination rates — requiring masks for unvaccinated students while allowing vaccinated students to go maskless.

“It's a common sense approach to have people who are unvaccinated be wearing masks, and that seems to be exactly what this provision would disallow,” he said.

Berman noted that Brenner’s vaccine amendment to HB 244 was introduced at the end of the legislative session without going through a normal hearing process. As a result, he said the law has vague wording, making it difficult to predict how the coming months will unfold.

“There is a lot of language in this bill that is unclear that probably could have been cleaned up,” he said. "There will definitely be questions that come up about what exactly this language means."

Pete Grieve is a Report for America corps member covering public health for Spectrum News in Columbus, Ohio. Report for America is a nonprofit national service program that places journalists in local newsrooms to report on undercovered issues.