AKRON, Ohio — Like many events upended by the pandemic, a women’s suffrage centennial celebration planned in Akron for August last year never happened. It would have celebrated ratification of the 19th Amendment to the U.S. Constitution, declaring no citizen could be denied the right to vote based on gender.


But behind the scenes, work to permanently honor suffragette and human-rights advocate Sojourner Truth has been in full swing.

The Summit Suffrage Centennial Committee, convened in 2019 by Executive Ilene Shapiro, has commissioned a bronze statue to be installed at the site the slave-turned-suffragette delivered what is considered one of the most important abolitionist and feminist speeches of those times.

Truth gave her “Ain’t I a woman” speech during the Ohio Women’s Rights Convention on May 29, 1851 from the steps of the Old Stone Church, which once stood in downtown Akron. The site, overlooking the Little Cuyahoga River, is now a grassy lot across High Street from the United Way of Summit and Medina counties.

A ceremony is planned for May 2022 to unveil a roughly 10-foot-tall statue of Truth, created by Akron-native, and artist Woodrow Nash, said Towanda Mullins, who chairs the centennial committee.

“She was a towering six-foot-tall woman,” Mullins said, and when she climbed the steps of the church to deliver the speech she was overlooking the city.

The centennial committee, whose goal is to raise $500,000, has received some grants for the statue from area foundations.  The committee also has partnered with Akron Community Foundation to open fundraising to the public, Mullins said.

“I don't want anyone to miss the opportunity to be a part of this history,” she said.

Truth’s speech is significant because although it was early in the movement, women’s suffrage was controversial and gaining ground, and as a Black woman promoting equality and voting rights for all women, Truth showed great bravery, Mullins said.

“This was a very important time for Ohio women's rights,” Mullins said. “It was her courage, and the fortitude that it took as well, that speaks volumes.”

The centennial committee also plans an educational component to honor the historical figure.

“A lot of students, and adults, just don't know the story and the rich history that aligns with the city of Akron,” Mullins said. “So it's imperative that we continue to work with APS in broadening the horizons and reaching out to other schools within the area to ensure that those particularly in this area are familiar with Sojourner Truth.” 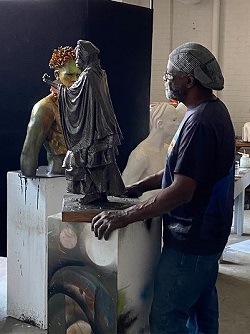 Truth was born Isabella Baumfree in 1797 in Ulster County, New York, spending her early years as a slave. By most historical accounts she had five children with a slave named Thomas. After her owner, John Dumont, reneged on a promise to give her freedom in 1826, she took her youngest child, an infant daughter, and left.

“I did not run off, for I thought that wicked, but I walked off, believing that to be all right,” she reportedly later said.

By most accounts, in 1827 when the New York Anti-Slavery Law emancipated all enslaved people, she moved to New York City to work for evangelist Elijah Pierson, and later preacher Robert Matthews.

She became a “fervent Christian,” and accepted a calling to go out and preach against slavery and oppression. In 1843, she changed her name to Sojourner Truth and joined an abolitionist organization.

In 1851, the year Truth delivered her famous speech, she was traveling around the country with Frederick Douglass, an escaped slave who became a well-known public speaker, Heppner said. She was promoting a book she had written, “Sojourner Truth’s narrative and Book of Life.”

At the time, Truth also was friends with a couple from Salem, Ohio, Marius and Emily Robinson. Marius Robinson was a Presbyterian clergyman and editor of the Anti-Slavery Bugle, which, for the time period, had an impressive circulation of 1,400, Heppner said.

Although most historians agree Truth’s speech at the women’s convention was moving, some say she never actually said the words “Ain’t I a woman.”

One theory is that abolitionist Frances Gage, president of the women’s convention, added the phrase as a kind of “spin” 12 years later, when she recounted the speech, Heppner said. Gage’s account also gave Truth a slight Southern dialect, although she was of Dutch descent.

The phrase “Ain’t I a woman” is also missing from the story Robinson published in the Bugle one month after the 1851 convention, when he printed Truth’s speech, as close as he could get to her actual words, Heppner said.

The Sojourner Truth project published Robinson’s and Gage’s accounts of the speech side-by-side for comparison.

“That touches me to continue,” she said. “So it has been a long journey. It'll be well worth it in the end.”

To learn more about Sojourner Truth, and the work of the Summit Suffrage Centennial Committee visit the website.