He is expected to speak at the James Cancer Hospital Solove Research Institute at Ohio State University on the anniversary of the signing of the Affordable Care Act, which went into effect in 2010.

The president will tour the university’s Department of Radiology and Oncology, which received a $100 million grant from the Affordable Care Act, according to officials.

On Tuesday morning, Ohio Republican Party Chairman Bob Paduchik criticized the president for coming to Ohio to deliver remarks on health instead of visiting the border.

"Today is not the day for a PR tour to spike the football on a $1.9 trillion 'relief' bill that does next to nothing to combat COVID-19," Paduchik's statement said.

White House Press Secretary Jen Psaki provided brief comments on the president's visit during a briefing with reporters on Monday.

Columbus Mayor Andrew Ginther said he was pleased to learn the president would be coming to town to get a look at the city's recovery. Ginther said he hoped to get the chance to thank the president for the stimulus dollars. Ohio is expected to receive an estimated $5.4 billion from the rescue plan.

“That effort, that he signed into law is going to bring $186 million into this community and $255 million to the county so that we can keep people in their homes, help with food and housing insecurity, and invest in small minority businesses who really struggled during this COVID recession,” he told Spectrum News 1 Friday at a Columbus vaccination clinic. “I want to thank him before he shows up for that.”

DeWine said during his news conference Monday afternoon he looked forward to the opportunity to discuss the pandemic and the federal partnership on a mass vaccination site at Cleveland State University during his time with the president, with whom he said he has a good relationship.

“Fran [DeWine] and I have been invited to meet with the president when he flies into Columbus tomorrow, and we intend to be there representing Ohio and to welcome the president of the United States to our great state. I’ll have a private discussion with him. It’s not anything huge. I’ll frankly probably spend the time talking to him about what we're seeing in regard to the virus in Ohio.”

The governor said he has concerns with the American Rescue Plan, and said he wasn’t on board with the tax provision, which requires any state that accepts funding to commit to not cutting taxes for the next three years.

“This gets right into the nitty-gritty. It’s the United States of America -- not the federal government of America,” Yost said Wednesday.

The governor also said relief dollars should have been dolled out based on population. If that had been the case, DeWine estimated the state would receive an additional $843 million.

DeWine said the state is considering using stimulus dollars for broadband expansion -- an initiative the state administration has put forth to help underserved and rural communities.

However, the tax provision only applies to state funding and not local government funds. Local governments are expected to receive a total of $5 billion in each state, and Ohio’s largest recipient would be Cleveland, which would receive $541 million. Columbus is expected to get around $186 million, according to the American Rescue Plan.

Local governments can use the bill to assist businesses and individuals, as well as infrastructure projects. 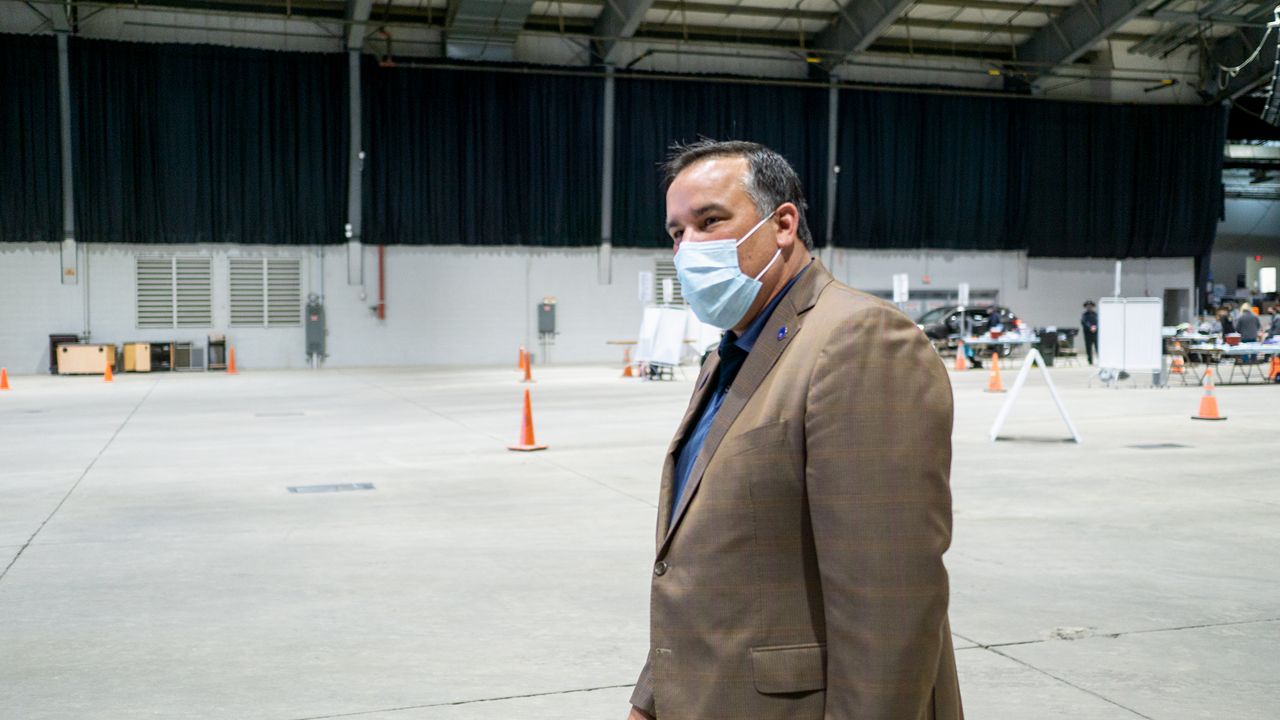 Columbus Mayor Andrew Ginther, speaking at a vaccine clinic Friday, said he is thrilled the President will get a look at the city's recovery. (Pete Grieve/Spectrum News 1)

The event is part of Biden’s “Help Is Here” tour. He is expected to arrive at John Glenn Columbus International Airport in the afternoon and deliver remarks at the James at 4:50 p.m, officials said Monday night.

Last week, Biden and Vice President Kamala Harris spent time in several states, like Pennsylvania and Colorado as part of their “Help Is Here” tour speaking with families and businesses about the effects of the COVID-19 pandemic, promoting that Biden's plan will lower health care spending for American families.

Ginther said it is an honor "anytime we have the leader of the free world coming to our community and we get to show off what's going on here in Columbus."