Hari Dahal (left) and his brother Gagan Dahal (right) co-founded BRAVE in Cleveland with a group of friends they launched a bi-lingual publication with in high school.

CLEVELAND — When coronavirus first began to spread across the United States, a group of young Cleveland immigrants took matters into their own hands.

BRAVE serves Greater Cleveland immigrant families whose members often work in frontline jobs in the service industry and live in congregate housing, where early in the pandemic the virus was spreading fast.

Information also was spreading fast in the early days, much of it incorrect, with little of it translated for America’s immigrants.

BRAVE volunteers worked to provide information about COVID-19, and deliver food and medical supplies to the families’ doors. Nurses, drivers, supply chain workers and shoppers all pitched in to help the group help those in the immigrant community. 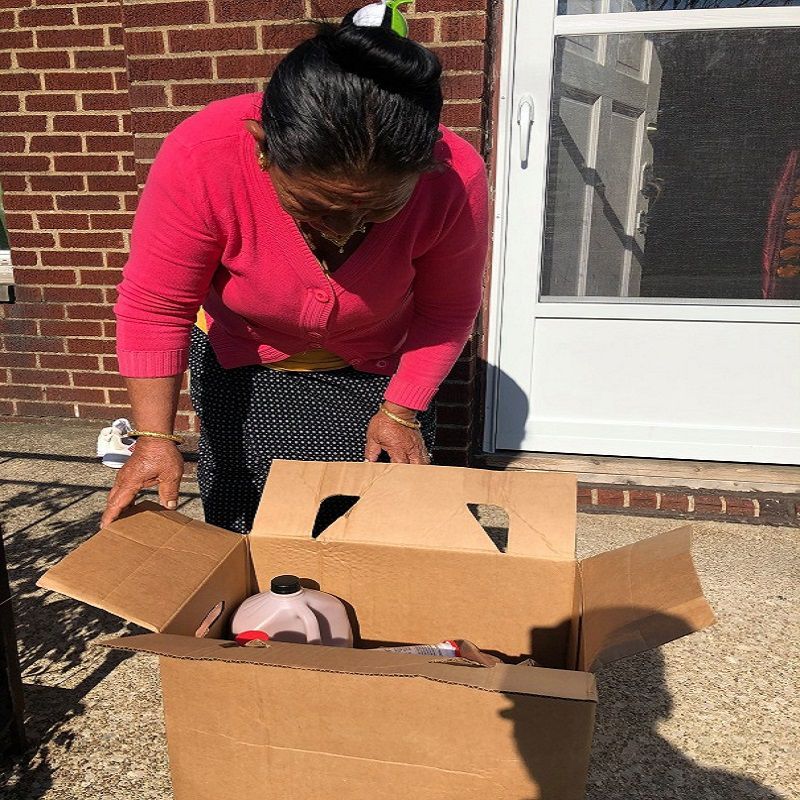 BRAVE delivers food and supplies to the doorstep of immigrant families struggling with COVID-19.

With chapters across Ohio in Akron, Columbus, Dayton and Cincinnati, BRAVE has chapters springing up in surrounding states as well.

The organization also now has nonprofit status as Connecting Cleveland Community (3C), and can apply for funding and necessary supplies, said co-founder Hari Dahal. Since the onset of the pandemic, 3C has connected with and received grants from groups like Neighborhood Connections, Global Cleveland and the Refugee Response in Cleveland.

With many moving parts in each city, the group developed the BRAVE app to keep all components of the BRAVE project operating smoothly, Dahal said.

“Within this app, we added a way for new volunteers to sign up so that we can assign them their respective role within our BRAVE project's sub-teams,” he said. “This app enabled other new locations to establish their local BRAVE projects.”

Dahal, the lead developer in the organization, was recently hired by Microsoft, so he had the skillset to code the BRAVE app to be not only multi-functional but also HIPPA compliant, he said.

“So whenever we get a call, we insert that information on our app so that other volunteers, like our nurse volunteers, would see their numbers and information about that particular client or their family on the app so that they would reach out to them that way,” he said. “Also within the app, let's say like GrubHub style, our drivers would see the dispatches on the app. So they would pick up those items and drive to those people's house and on our app, we add the address so that they could click on it and then get directions to their house.”

The group also launched a software company - Nebham LLC – to enable them to create similar apps for other nonprofits that need help keeping volunteers and projects organized, Dahal said.

Now, with COVID-19 once again spreading across the community, BRAVE is back at work, delivering supplies and support to Nepali families across Greater Cleveland.

BRAVE is one of several community-centered projects 3C has initiated, Dahal said.

The notion of giving back to the community started years ago when the BRAVE founders attended Cleveland's Lincoln-West High School and Lakewood High School.

There they launched the bi-lingual newspaper "Connecting Cleveland,” which published for more than a year.

Publication stopped when the friends all went off to college, but the pandemic brought them back together under a common cause, Dahal said.

“We talked amongst us and restarted our community volunteering effort, and started our pandemic assistance effort,” he said.

Dahal, who came with his family to the United States in 2013, said the idea of volunteering is instilled in refugees at a young age.

“In the refugee camps in Nepal, we were pretty much raised, or we were able to survive, due to other people coming to help us in that way. So you can see why we would want to at least help or give back to the community in that sense,” he said.

Help continued, from volunteers and nonprofits, once the refugees were resettled in the United States, he said.

“So they were, again, helped by these different refugee-oriented organizations, like Catholic Charities, or Us Together,” he said. “Those different organizations helped them navigate their American life. So that's one of the reasons why everything that we have done or been able to do, has been supported by other volunteers.”

So far, BRAVE has helped more than 300 Cleveland-area families during the pandemic, he said.

Chapters in other parts of Ohio are also back up and running with the latest virus surge.

Sudarshan Pyakurel, a Columbus community organizer who leads that city’s BRAVE chapter, said last week the group helped about 20 families, delivering medical supplies and food. Several families per day reach out to BRAVE for help in Columbus, he said. For more information, visit the 3C website to call or send the group an email.