5115 at The Rising is Bringing Mixed-Income Housing, and Hope, to Slavic Village

CLEVELAND — A new, mixed-income housing complex in the North Broadway area of Slavic Village is considered more than a building to residents there – it signals a movement designed to revitalize and lift up a struggling neighborhood from the inside out.

The $20 million project called 5115 at The Rising on the southeast side of Cleveland is the result of a partnership between University Settlement (US), the nonprofit energizing the movement, and the Cleveland-based NRP Group, one of the largest developers in the country of market rate and affordable housing.

5115 at The Rising is planned to house about 90 families - 250 to 300 people - in sustainable apartments and townhomes, with the interior designed to meet LEED Silver certification standards, said US Executive Director Earl Pike.

On the ground floor, 5115 will offer retail businesses that enable people to gather – possibly a coffee shop and a barber, he said. 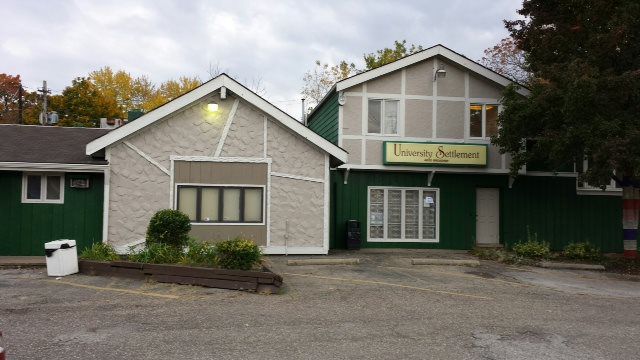 Additional mixed-income residential buildings are planned for The Rising, which will also be known by numeric street numbers, as part of The Rising.

“There's a grander vision of building out even more homes, a mixture of affordable and market-rate housing, and it's really all about creating, or recreating the sense of community,” said Cleveland City Councilwoman Phyllis Cleveland, whose Ward 5 includes Slavic Village.

“You know, decades ago, people of all backgrounds lived in the same neighborhoods. And when we moved away from that, we lost some things in our society, I think, so this is a great way to try to start rebuilding that sense of community, that caring about everyone in the community.”

The first structure under development, 5115, will also provide a new home for US. A capital campaign, Broadway Rising, has been underway to raise $5 million, which is US’s portion of the project, Pike said. NRP will finance the commercial and residential space costs.

US has operated in Slavic Village since the 1920s, morphing from a training facility for Case Western Reserve University social sciences students to a nonprofit providing transitional housing and other services.

It has been at its current site since 1983. Now rodent-infested, the building leaks and floods, and last year, a raccoon crashed into one of the classrooms, Pike said.

However, Pike says he is most troubled by the message a broken-down environment communicates to the people who use US services.

“What our current building tells people when they come to us, is you've reached the end of the line, it doesn't get any better than that,” he said. “So part of the impetus behind the building was it was uninhabitable, but part of it was we want to write a new story about the possibilities for people in this neighborhood.”

Slavic Village has been made promises about improvements in the past, Cleveland said.

Despite the condition of its facility, US provides an array of services to the community.

About 54 percent of Slavic Village residents use at least one US services, he said, so when the pandemic closed the country down, US remained open.

“We were really careful so we were able to dodge any real risk,” he said. “But it was really important to the community, I think realizing in retrospect, that we didn’t shut down, and we were there every day because they needed us.”

Cleveland City Councilman Anthony Brancatelli, Ward 12, grew up in Slavic Village and served for years as director of Slavic Village Development Corp. He says the work of U.S. is vital, especially now.

“Putting a flag in the ground over there really is significant. And because of the services that are delivered, not just to the families, but to the outreach, the fact that they're going out and are engaging people hand-to- hand,” he said. “That’s what's been lost in this pandemic. There's just this face-to-face engagement for people not knowing where to turn to and where to go.”

Like many Rust Belt communities, Slavic Village is filled with aging homes built quickly and cheaply to house immigrants who came to the region to work in steel mills that once dotted Northeast Ohio.

Further decimating the neighborhood was the housing market crash a decade ago.

CNN Money listed ZIP code 44105 in Slavic Village No. 1 in the nation for foreclosures in early 2007, reporting 783 filings in just three months, according to the RealtyTrac study.

Two years ago, US completed a study of lead toxicity in the neighborhood and found a 30% toxicity rate, which is much worse than exposure rate, Pike said. Lead toxicity can have a life-long negative effect on cognition.

As a result, part of US’s commitment to residents is to mitigate lead and other asthma triggers in 250 homes in the immediate vicinity of The Rising project.

“That literally means that hundreds, if not over time, thousands of kids have the opportunity to write a new narrative about their educational future,” Pike said. ​

“It became one of the poorest communities pretty quickly after the foreclosure crisis,” Brancatelli said. “That section of Broadway just north of 55th Street, and right by the freeway really became a land where people walked away from them and left them behind.”

But excitement is building about The Rising, Pike said, with community input elicited at every step of development.

To ensure the new facility serves the community and doesn’t alienate anyone, US is working with Case Western University’s Mark Joseph, the professor heading up the Mandel School of Applied Social Sciences.

“What we're really looking to do is build and grow a strong, informal, dynamic network that can engage as many community members and residents as possible,” he said. That engagement will come through whatever organizations are already in place in the neighborhood, he said, such as schools, and churches, as well as through the informal ways residents already connect.

5115 at The Rising will be completed by next December and will begin moving residents in in early 2022, Pike said.

“This is our version of Midtown,” Brancatelli said. “As a gateway to Slavic Village, it is incredibly important because it's a $20 million project, and because it's going to bring nearly 100 units of affordable housing, as well as additional market rate housing as we move forward. But becoming an anchor for University Settlement, for their space, will improve their service delivery significantly. It's going to make them incredibly more efficient, it's going to improve their operations.”