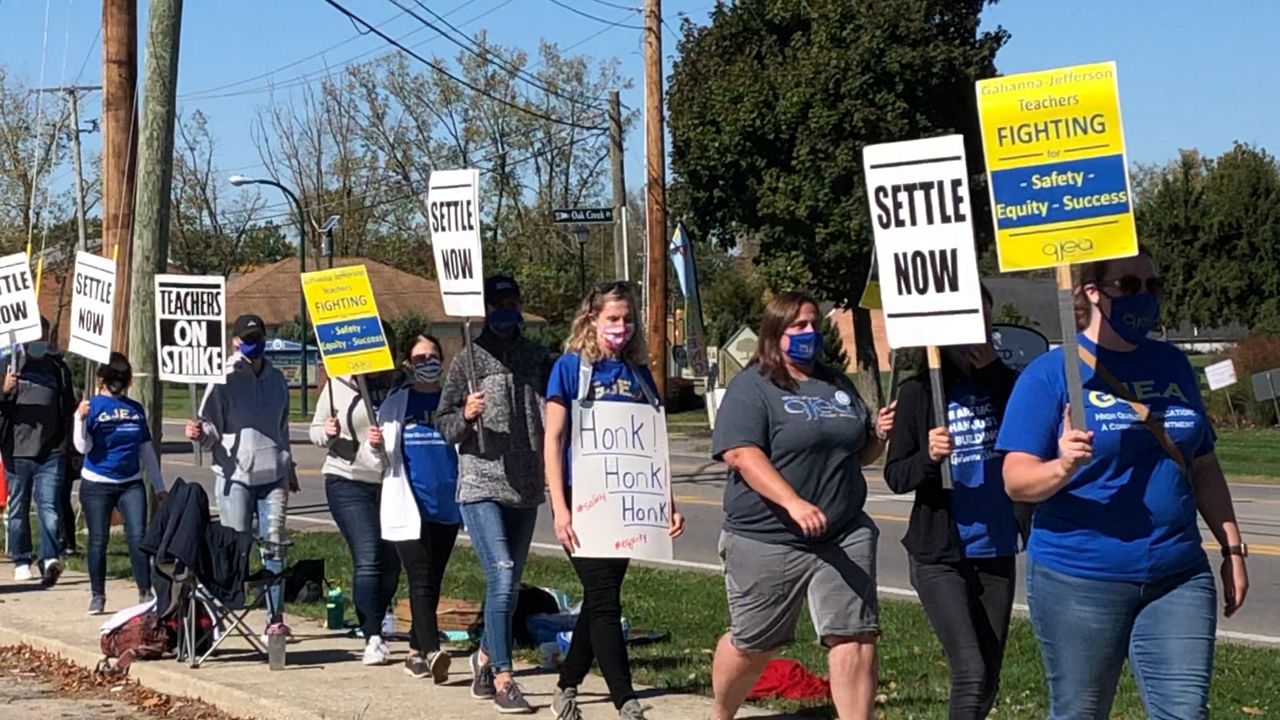 Educators Across the State on Strike Over Failed Negotiations

COLUMBUS, Ohio — For the first time in years, university professors and K-12 teachers in Ohio have hit the picket lines in unison because of failed contract negotiations.

Both wanted to avoid strikes but were unable to reach agreements.

Scott DiMauro, the president of the Ohio Education Association (OEA), said the strikes are results of larger issues at hand.

“It’s a battle for respect to make sure that as educators their voices are being heard,” DMauro said. “And then we need leadership at the local level to make sure that educators are engaged in the conversation on how to best meet the needs of our students.”

With COVID-19 around, it hasn’t helped make anything better.

“School districts and colleges and universities are really facing a resource crunch,” DiMauro said. “In many cases, you know, it existed before the pandemic, ... but it's made even more acute given the revenue pressures that are coming from a downturn in the economy.”

OEA’s biggest concerns on the table, in addition to the current strikes, are local union deals in Portage County where Streetsboro teachers and support staff are at the negotiating table for many of the same reasons as those in Gahanna, including the desire for safety and equity in the classroom.

“Both voted to issue a 10-day strike notice, and so (those) two unions are continuing to struggle to get a fair contract themselves,” he said.

The hope is that they can avoid the gap in learning and the problems Gahanna students and teachers now face as they picket together.

“I really want my credits to graduate, and if I can’t do work to show for that, I don’t know what we’re going to do,” said Mikki Shaffer, a Gahanna-Lincoln High School student.

When asked how long the strike could go on for, history teacher Michael Rueger said the length of the strike comes down to what the administration is willing to do.

For now, DiMauro believes the strikes are sending a message that cannot be ignored and that teachers want their voices heard. When their voices aren't heard, it can lead to disputes and picketing as is being seen now.

While all sides in negotiations across the state are still willing to work things out, K-12 administrators in Gahanna have indicated that misinformation surrounding the hybrid learning plan is a problem.

They've also expressed disappointment that teachers have "abandoned their students during a public health crisis" and they see it as a "negative consequence that is unnecessary."

They do want to work with teachers to find the best technology platforms that will work for all students.

Those at Youngstown State are calling on faculty and staff to end the strike for the sake of students and the community who have persevered in the pandemic. They have agreed to enter into late-night negotiations to work something out.

Yet, school officials said put together plans for students to keep learning just in case they didn't reach a deal in time for classes Wednesday.