Despite Halt, Hundreds to be Evicted in Columbus This Month

COLUMBUS, Ohio — Dozens of eviction judgements are granted to landlords each day in Franklin County despite a federal eviction halt. If the tenants showed up to court, almost all would keep their homes.

The Centers for Disease Control and Prevention’s eviction moratorium, which went into effect Friday, has certain eligibility requirements, most importantly that tenants must have “used best efforts to obtain all available government assistance for rent or housing.”

But the moratorium has created confusion for tenants facing eviction cases. Tenants hear on the news that evictions are halted, causing some to think they are in the clear to skip their court dates, or they even think that eviction court is shut down, Magistrate Danielle Sparks said. That is, of course, mistaken. The court is as busy as ever.

For obvious reasons, the 1,800,000-square-foot Greater Columbus Convention Center is nearly deserted. But if you follow signs for the municipal court, at the end of the sprawling, desolate halls, down an escalator, past a concession stand, and through security, Sparks is hearing eviction cases. The court has moved to this larger, temporary space so eviction attorneys and tenants are not elbow-to-elbow riding the elevator at the courthouse.

A fast-talking judge can get through an eviction matter in about 30 seconds, particularly when the tenant does not show up, which is common: “Was the tenant behind on rent?” Yes. “Are they still behind on rent?” Yes. “Are they still living at this address?” Yes. The judge issues an eviction judgement, and a red tag is placed on the tenant’s residence giving them five days to vacate or risk a “set out” of their belongings on the curb.

Most tenants who show up to court are currently not at risk of an eviction judgement. In Franklin County, emergency rent assistance is available from the Impact Community Action nonprofit’s Hope Fund, which has raised more than $12 million, including $7.5 million through the CARES Act. Right across the hall from the eviction courtroom, residents can apply for immediate approval for this assistance.

Tenants who show up to court can get caught up on rent with Impact, or if they cannot get emergency assistance, they can demonstrate eligibility for the moratorium’s protections by showing they have sought government relief. The exception are cases unrelated to non-payment of rent. For example, some landlords pursue evictions in cases of criminal activity such as drug dealing at a residence.

The way the moratorium is structured, tenants are not automatically approved to be invincible from eviction. The renter is required to provide a signed written statement to their landlord certifying their eligibility for the CDC’s protections.

Sparks had 112 cases on her docket Wednesday morning. More than 30 tenants who did not show up will get red tags on their doors, giving them five days to vacate their residence. 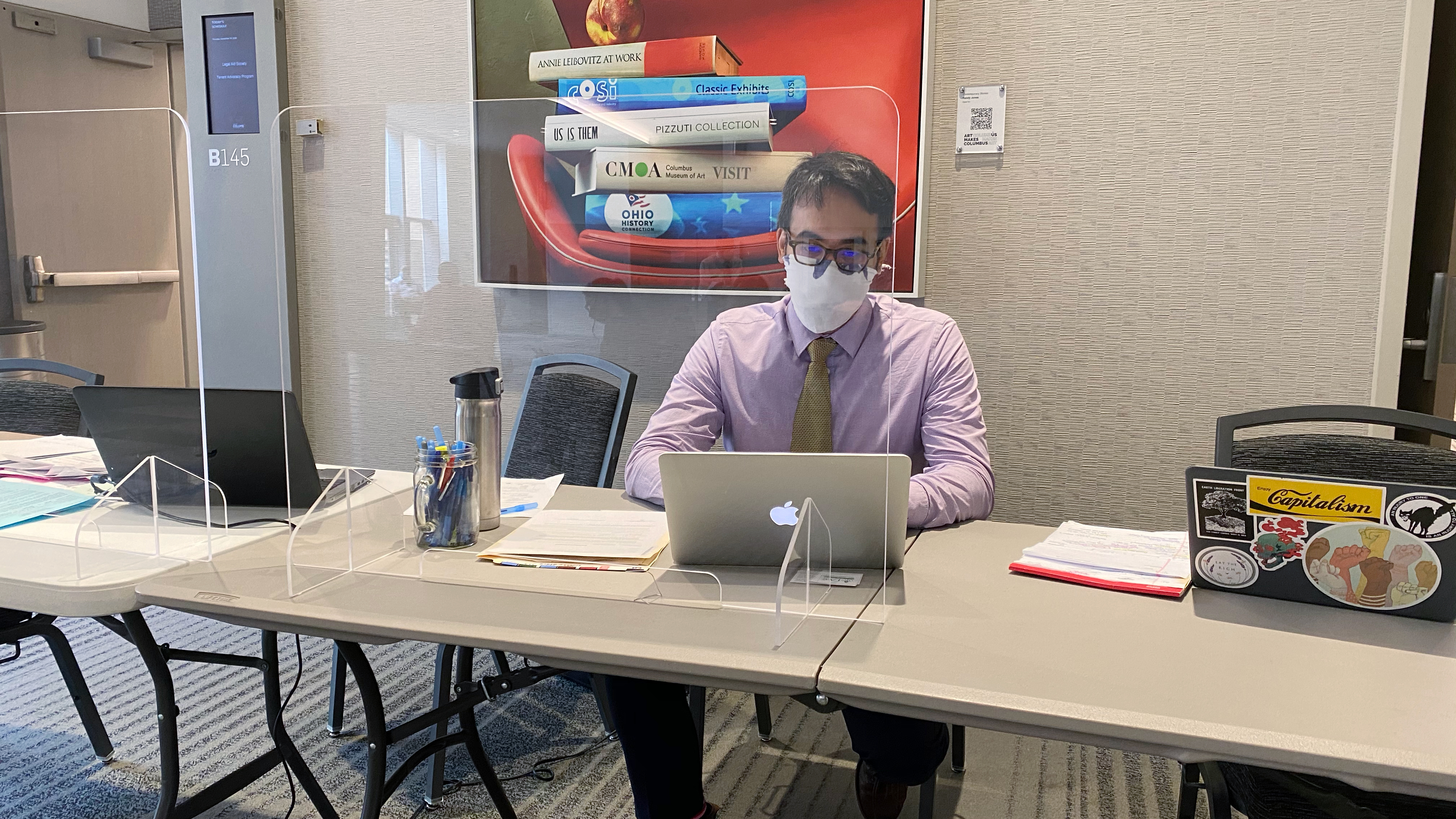 Legal Aid Society attorney Jyoshu Tsushima works at a booth across from the eviction courtroom to pair tenants with free lawyers.

“The agencies across the hall are bending over backwards to get people caught back up on rent,” Sparks said. “But if you sit at home and do nothing, you’re going to see a red tag on your door and your property on the curb.”

Everyone who had showed up Wednesday morning was eligible for assistance through the Impact fund, she said.

The eviction moratorium does not mean rent is canceled for those who are eligible. Tenants who receive protection from the moratorium will still owe months of back rent when the order expires in December. Receiving emergency rental assistance from Impact is a preferable outcome for both parties – the landlord gets paid and the renter will not owe so much down the road.

In most cases, this means the CDC eviction moratorium does not kick-in because landlords get paid directly from the Impact fund and cases can be dismissed. Rural Ohio counties that may not have robust rent assistance programs may see more eviction cases dismissed as a direct result of the moratorium. Later in the fall, the moratorium could play a greater role in Franklin County eviction court if tenants exhaust their eligibility for rent assistance, or if the funds run out. But millions of dollars remain available for renters.

The positive outcomes so far in Franklin County are good signs for tenants like Corinne Zamara, 28, who are on top of their cases. Zamara’s landlord brought an eviction case against her and her mother last week for their three bedroom home on Columbus’s North Side, where they have been caring for a full household and struggling to make due since Zamara’s 25-year-old sister died of sarcoma cancer on August 25. They fell behind on rent by $1,450.

Zamara is a third shift waitress at a Waffle House that remains closed due to COVID-19. Her mother works 12- to 13-hour shifts at Ohio State Pizza, but it’s not enough to support the large household. With five kids to look after – two of her own and three of her sister’s – while school is all virtual, Zamara says the prospect of working herself is difficult to imagine.

On Thursday, Sept. 3, they were granted a one week continuance on their case to procure counsel, the maximum extension judges can issue. On Wednesday, Zamara was on hold for hours with Impact trying to get through to put in her application. Even if she cannot get Impact assistance, the moratorium’s protections should keep her housed.

“Hopefully we can stay in our home,” Zamara said. “With the shelters being so full right now it's probably hard to get a whole family in there – multiple adults and a handful of kids.”

Magistrate Gene Edwards, who hears eviction cases in Franklin County, said the job of an eviction judge can be tough, especially when tenants say an eviction will leave them homeless.

“It’s common to hear about people falling behind due to loss of a job. That’s hard no matter what, whether it’s during the pandemic or not,” he said.

But he said Franklin County residents are better off than residents of many other counties in Ohio when it comes to support services for residents facing eviction.

Many of these services have set up booths across the hall in the convention center. The Legal Aid Society’s Tenant Advocacy Project provides free legal representation for tenants facing eviction; the court’s Self Help Center provides guidance to tenants representing themselves; social workers are available on site; and Impact offers emergency rent assistance.

Even when evictions are issued, Edwards said he is able to direct tenants to housing resources if they attend their hearings.

“The best thing tenants can do is be here, period,” he said. “The odds are so much better with case outcomes.”

Willis Law attorney Dimitri Hatzifotinos, whose firm represents landlords in about half of Franklin County’s eviction cases, said he prefers to resolve cases without eviction judgements, especially during the pandemic.

Hatzifotinos says it’s a common misconception that the county has seen a surge in evictions caused by COVID-19.

Even as residents lost work and faced various financial hardships due to the pandemic, the number of eviction filings in Franklin County remained below previous years’ averages.

In August, following the expiration of an earlier and more narrow federal eviction moratorium that expired July 28, which only applied to renters who live in homes or apartments with a federally backed mortgage, 984 eviction cases were filed in Franklin County — an increase from previous pandemic months but still well-below the normal August average, which is 1,659 filings.

September is expected to be the busiest month for eviction filings in the county since March, when the pandemic hit the U.S. But if tenants show up to court, a much smaller portion of the filings will result in eviction judgements than in a normal year.

So far in September, the court reports 413 filings. By this time last month, just 163 cases had been filed. Due to the timeline of the eviction process, some tenants who were protected by the first moratorium are now facing filings this month. Additionally, the expiration of the $600 per week unemployment stimulus just over a month ago has left some tenants unable to pay rent.

Hatzifotinos said filings have been lower in the county during the pandemic due to a combination of government relief, the first eviction moratorium, and the flexibility of some landlords.

Since March, he said landlords have taken a more accommodating approach to nonpayment of rent – waiving late fees, allowing partial payments of rent, and waiting longer to file eviction cases. The biggest challenge is non-responsive tenants who cannot be reached and do not show up to court.

With the eviction moratorium, this group of non-responsive tenants represents the bulk of those who will lose their homes.

“We have been knocking on people's doors, we have been sending extra notices, we've been giving extra time. All we want to do is have these people come and talk to us so we can figure out what we can do to help them,” he said. “There are some who have just been silent.”