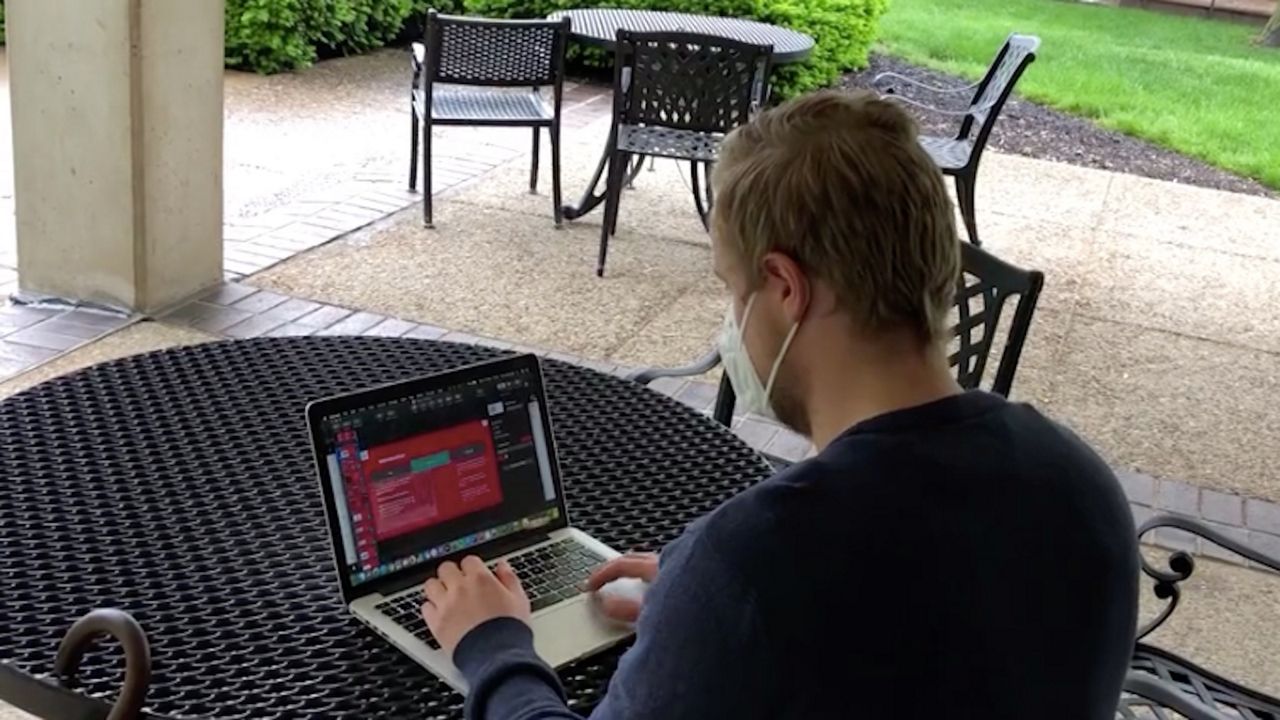 WESTERVILLE, Ohio — COVID-19 may be providing a silver lining for one central Ohio university and its students as they are seeing a spike in their summer class enrollment for the first time in a nearly a decade.

Otterbein University officials say since the pandemic forced all learning to go online, it's really given students a chance to catch up or even get ahead, all while boosting summer enrollment.

Graduate student Tom Greensall gets a breath of fresh air from his Zoom meetings and sits down to do some classwork. Moving throught his final course, the MBA student is just one of hundreds taking a class this summer.

“I’m on a visa, which runs out at the end of August, so if I didn't get to do it this semester, I'd have had some bigger issues.”

Greensall’s working on a project that he’d normally be doing in person. He said it’s been a little difficult trying to solve company problems while working with clients online, but he’s getting through it.

University officials say a marketing campaign and increase in course offerings before the pandemic hit was already underway; But now that all learning is remote, Jefferson Blackburn-Smith, vice president of enrollment management, believes it’s providing an opportunity many might not have normally taken.

“There are a significant number of students that are home. They can't work, although now some of them might be able to get back into the workforce. And why waste that time, What am I gonna to do, sit at home? I can't hang out with my friends, I can't. I might as well pick up a class or two," Blackburn-Smith said.

A class or two has now turned into 181 more undergraduate students enrolling compared to last summer. That's made for a 73 percent jump. It’s something Blackburn-Smith hasn’t seen before as summer enrollment has always been significantly lower.

Regardless, students are now reaping the benefits. He said some are making that decision to “Either catch up if I'm falling behind. If there's a class that I think is really hard and I want more time to work on it, I'll register for that or in some cases we know there are some students that are working ahead, thinking about, well maybe I can knock some things out. So my last term was a lighter term.”

For students like Tom Greensall, this online summer session continues to sharpen his skillset.

“It's made us think deeper and differently, which with an MBA, problem solving is an important skill to have. And it's been a great opportunity to kind of deal with that in real time and kind of figure out how you how you best process that.”

Greensall hopes the adjustments will be enough to land him a project management job here in the U.S. once he finishes in August.

Greensall is originally from England and hopes to stay in the Midwest. School officials say the number of graduate students taking courses is up one percent in addition to the undergraduate numbers. Overall, Blackburn-Smith said,  the boost in online courses and the enrollment response makes them feel better about their enrollment numbers for the fall since they know they’ll still be dealing with COVID-19.