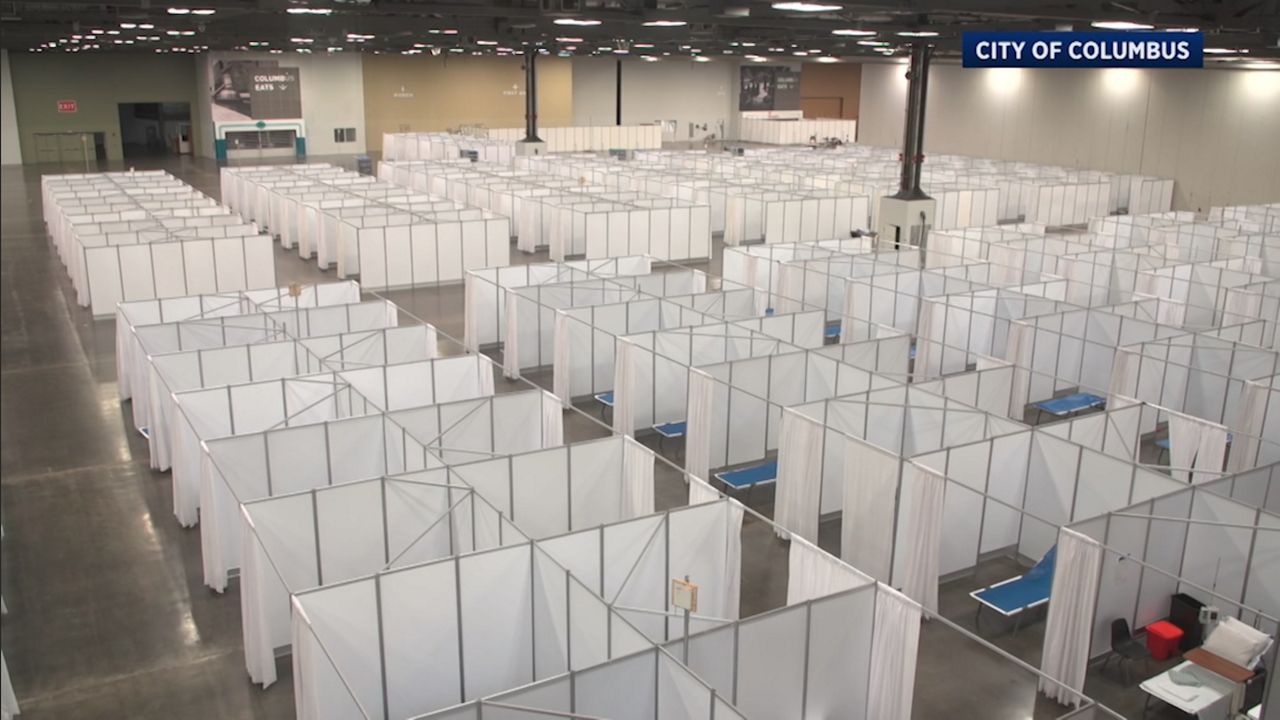 OHIO —  The Cleveland Clinic and Columbus Convention Center have completed their emergency hospital spaces. But as current modeling predicts, Ohio may never need them.

So was this preventative measure truly necessary?

Ohio leaders and health experts planned and prepared for a worst-case scenario, where hospitals would be flooded with COVID-19 patients and secondary spaces were needed for the tidal wave of patients overwhelming hospitals — situations like we've seen in Italy and New York.

But the move to create these spaces took both time and money — a lot of it, to be exact.

For example, it cost roughly $2 million to transform the Columbus Convention Center and it will cost an additional $3 million to operate the facility for 30 days if it is activated for patient use.

Executive Director of the Franklin County Convention Facilities Authority Don Brown said it took two weeks for the transformation to be complete. But it’s now fitted with 1,000 hospital beds that will be managed by three different hospital systems in central Ohio.

“It’s now patient-ready,” Brown said. “It could be activated with 72-hours notice. We hope that the social distancing and the stay-at-home pattern that’s widespread in Ohio will mean that the facility will never need to be used.”

Brown said the $2 million used to cover the cost of the transition was funding by Franklin County, which will then be refunded by FEMA.

Cuyahoga County was the initial epicenter of the virus here in Ohio and continues to lead the state in cases.

On Wednesday, the Cleveland Clinic announced the completion of its work to transition the main building of the Health Education campus of Case Western Reserve University and Cleveland Clinic into what they are now calling “Hope Hospital.”

The hospital dispelled any doubt about the necessity for the temporary surge hospital, stating:

"Cleveland Clinic has been observing the COVID-19 pandemic nationally and internationally and has been studying its effects to guide our approach. The temporary hospital is one part of Cleveland Clinic’s strategy to be fully prepared to meet the needs of our community during this rapidly-evolving situation.”

In Cincinnati, Mayor John Cranley said the city is still working on transitioning the Duke Energy Convention Center and for now, the city has no plans to stop progress, despite signs that the curve has been flattened. But they have reduced their projected capacity drastically.

“The number of beds that they thought they would need, from one point as high as a thousand, then 500, then 400, has now been scaled back to 140-something,” Cranley said. “Hopefully, those beds will never have to be used. But that is still in the works.”

And until these initial three sites are put into use, there is no state directive to expand the emergency space to other cities such as Dayton, Toledo, or even Youngstown — where Mahoning County has seen the most coronavirus deaths in the state.

Simply because the hospital systems are not currently overrun with patients as what was once projected before social distancing and stay-at-home orders were put in place.

And while chances for a secondary spike might seem unlikely, they are possible. So for now, Ohio’s three largest metropolitan cities are staying prepared for the worst until the coast is completely clear.