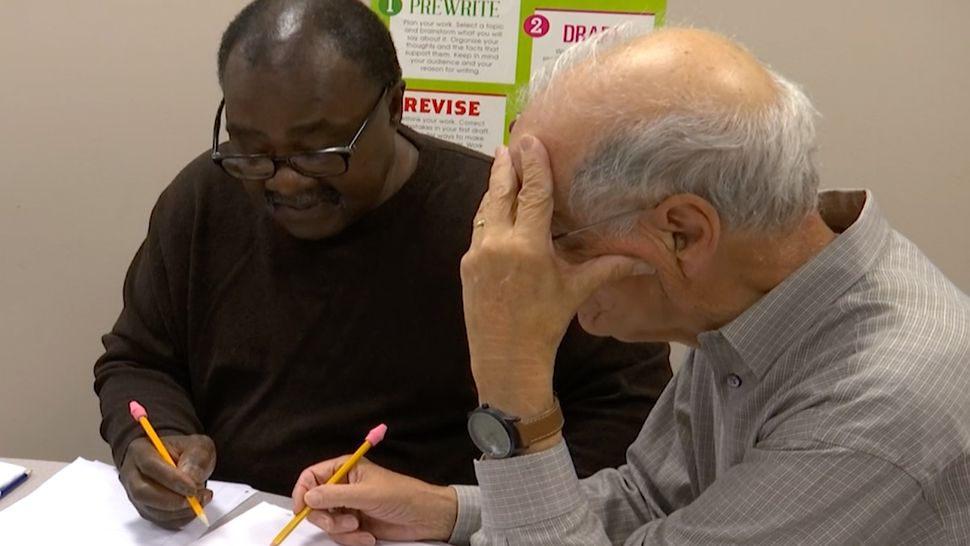 CLEVELAND—More than 30 million adults in our country are illiterate and Ohio is no exception.

It's a crisis happening all around us and it's not often talked about, but the consequences can be severe.

Seeds of Literacy is an organization working to change that in Cleveland, specifically targeting the Mount Pleasant and Clark Fulton neighborhoods.

"The need for services is really great nationally but in Cleveland and in these two particular neighborhoods, the need is very high," explained Carmine Stewart, the program director.  "We use statistics from a study that was conducted in 2003, and then a couple more recent iterations of that study, that estimate that rates of functional illiteracy are around 66% in the city of Cleveland proper, and then in certain neighborhoods, up to 90%. "​

Functionally illiterate means they are still able to parent, work, and function, but they don't really have the reading, writing and math skills to prosper in our society.

From division to reading and writing prep, students in the Seeds classroom are finally getting the education they never got as a kid for a variety of reasons.

"Our schools are really not set up to catch every child," Stewart said.

Some of the issues they see leading to this literacy disparity are parents who are not proficient in English, poverty, a lack of exposure to certain experiences, trauma in the family, and different ages when starting school and therefore different developmental levels.

She says once a student starts falling behind, it's very easy for them to be left behind.  Then the student often continues to struggle and fall even further behind.

​Seeds of Literacy in Cleveland offers one-on-one tutoring for free to help any adult to pick up where the traditional classroom failed them.

They have students from 18 years old to above 60.

"95-percent of our students are working towards their high school equivalency, but we have several students here who just want to be lifelong learners or just doing this so that they can read to their grandchildren, which is kind of an amazing thing," Kara Karwiec said.

Karwiec is the site coordinator for the east side location.  She's kind of a big deal here because her passion for helping these adult students just won her a national literacy award.

"The importance of literacy can't be understated," she said.  "It's something we don't want to talk about, the crisis that's happening with adult literacy rates, often get swept under the rug because people don't want to know it's such a staggering issue."

"84-percent of our students come in below the poverty level," Stewart explained.

Poor literacy and those without a high school degree or GED are limited in employment opportunities.

Statistics show unemployment can be two to four times higher for them.  Stewart says often they're restricted to hourly jobs with little benefits.

Helping achieve that success are hundreds of volunteers like tutor Ed Round.

"I started working with a student that had a high school diploma that was worthless," he said.  "Because she had graduated from high school with a second-grade reading level."

That's when this star tutor says he realized just how bad the crisis is.

"One of the students that I'm working with on improving his reading wants to read the Bible in his Bible study class," he explained.  "Another wants to read to her little boy."

During class this day, Round proudly shakes hands with 31-year-old Reginald Latten after just learning he finally passed every section and got his GED.

"I'm the first boy in my family to go to college," Latten said proudly.

"It was very important what I'm doing right now considering me not having money growing up," Latten said.  "I just wanted to get out of that.  I wanted to have something for my life."

He says he dropped out in the 11th grade and part of the struggle was just walking to school.

After a few fights and feeling like he didn't have much support to stay in school, he left to work full time so he could finally have money.

So, for years, Latten says he tried to get his GED at Cuyahoga Community College.

"It was an endless cycle, it was a test here, 'You're not ready.' A test here.  I started back working.  You know, a year go by another year go by, work, go back to Tri-C, more tests."

One teacher per classroom once again wasn't working.  But then he found Seeds and he got his GED in a year.

"The hard work paid off," he said proudly.  "Cause when I came here, I was taking extra work home after class, I would show up early, stay late, and do homework."​

The hard work also paid off for 50-year-old Dionne Lobban who just moved to Cleveland from Jamaica a few years ago.

"Here it's almost impossible to move ahead without a GED," said Lobban.

Lobban says other programs also didn't work for her.  But this one-on-one help and having a team of support made all the difference when it came to reading and writing English.

"It has boost my confidence to the level where I feel like I can take over the world," Lobban said.

As evidence of their success, Seeds of Literacy says they have a 75-percent GED test section pass rate.

Steigerwald says as they were preparing for their largest graduating class, the state announced recently it was cutting its funding to Seeds, opting to fund more traditional classrooms.

But the staff says, if that model worked for everyone, the need for Seeds wouldn't be so great, as they help more than 900 students each year.