AKRON, Ohio — About 200 demonstrators gathered on High Street in Akron in front of the Harold K. Stubbs Justice Center Saturday afternoon, despite calls by Akron officials to forgo gathering for a few days to let recent tensions fade.

Mayor Dan Horrigan in a video asked the community to take a break from protests after a toddler and a man were killed Friday night by gunfire in an incident unrelated to the shooting of 25-year-old Jayland Walker. The shooting is under investigation locally and at the state level.

In a statement, Horrigan and Police Chief Steve Mylett said officers involved in the Walker shooting have received death threats and the FBI has warned violent extremists are headed to Akron to incite more violence.

The city said it will organize daily press briefings, planned to begin Tuesday, July 11, to keep the media and the community updated. The city said it also will launch an incident website to provide up-to-date information on anything involving the Walker shooting.

Akron erupted in a series of protests July 3, with some becoming destructive, after police body-cam video of Walker being shot June 27 by Akron police was released to the public. 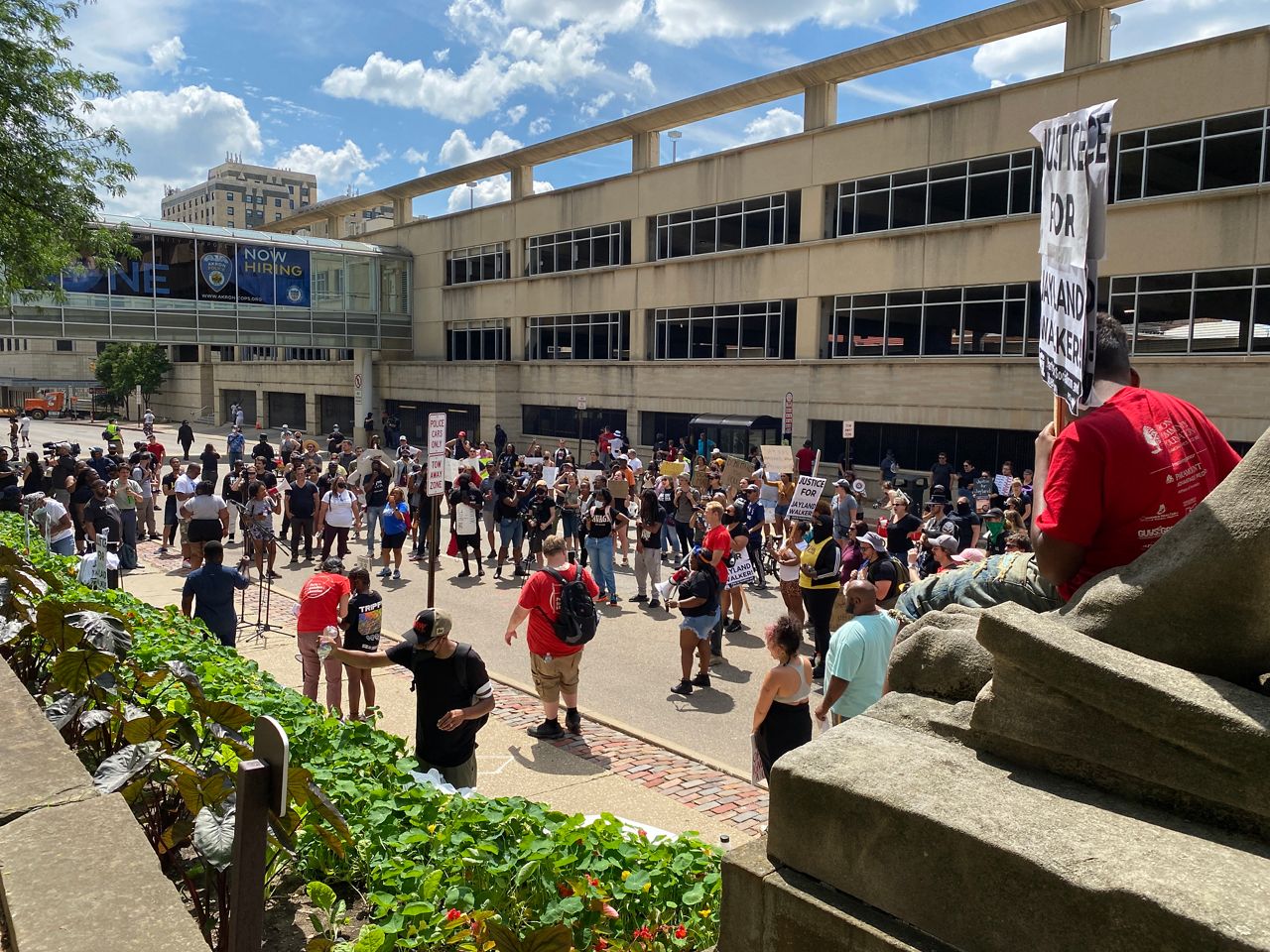 Since then, marches and rallies have taken place daily in Akron.

The Party for Socialism and Liberation organized Saturday's rally.. The PSL was joined by the Akron Chapter of the Democratic Socialists of America who together with the Freedom Bloc and Serve the People Akron presented the city with a 12-point set of demands last week the groups say must be met before protests cease.

Akron police were not in attendance Saturday. Representatives of the Ohio Chapter of the National Lawyers Guild walked through the crowd wearing brightly colored vests.

They were there to observe the rally and make sure protesters are treated fairly by law enforcement, said one of reps who wished to remain anonymous. The group also documents events as they happen and helps organize a legal defense for protesters.

During the rally, featured speakers were intermixed with cries of “say his name” answered by “Jayland Walker!” and “No justice, no peace!” by various organizers shouting through a megaphone. 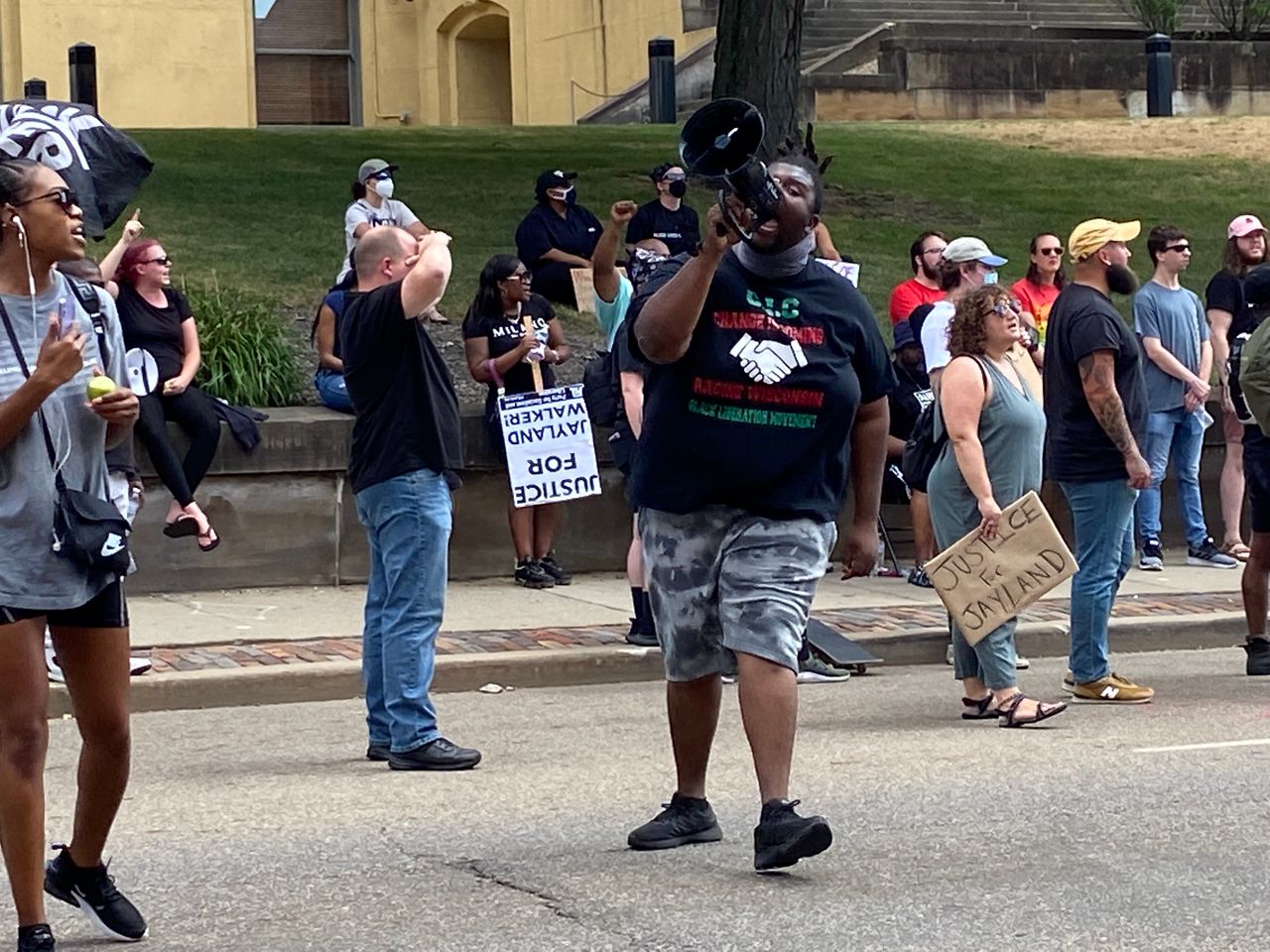 Organizers kept the crowd going between speakers with various chants during the rally. (Jennifer Conn/Spectrum News)

One speaker was Samaria Rice, whose 12-year-old son, Tamir Rice, was fatally shot by Cleveland police in 2014, while he was playing with a pellet gun.

Hearing about the Walker case was like having a band aid ripped off, Rice said, never letting her heal from her son’s death.

Rice said she is heartbroken over the shooting of Walker, who was unarmed when he was shot about 60 times after leading Akron police on a car and foot chase.

“Keep in mind that the police is the biggest game in America,” Rice said. She urged protesters to keep pressure on elected officials, including the city prosecutor, to ensure justice is served.

The officer who shot Tamir Rice, former officer Timothy Loehmann, was not fired for the boy’s death. He was fired for lying on his application to Cleveland Police Department about a previous job dismissal.

“Sometimes I feel like there's too much to hold,” he said. “But I'm here to tell you that we can hold it together.”

He told the crowd people need to be out in their communities taking care of each other, as law enforcement will not. 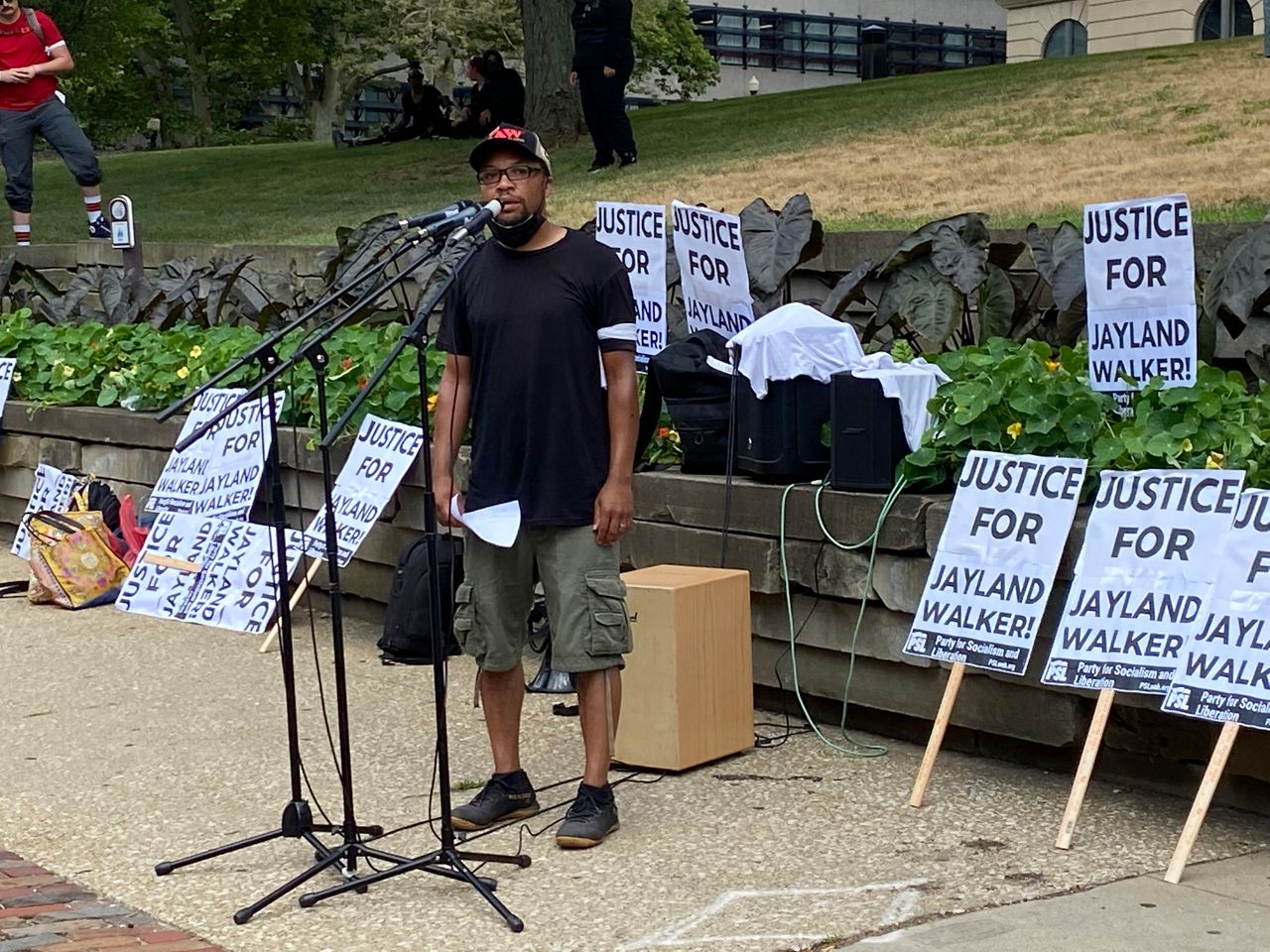 Josiah Quarles of the Tamir Rice Foundation encouraged protesters after saying recent events can feel like too much to bear. (Jennifer Conn/Spectrum News)

Also speaking at the rally was Jacob Blake Sr., father of Jacob Blake, a Black man who was seriously injured by police in Kenosha, Wisconsin in 2020. The younger Blake survived the shooting but is partially paralyzed and wheelchair bound.

Blake Sr. was arrested in Akron July 6 for rioting, disorderly conduct and resisting arrest. Blake told the crowd police beat him into having a seizure and he woke up in the hospital.

He said he is going back home, which arrest records show is North Carolina, but he urged protesters to unite.

“Take my power please,” Blake said. “Take my emotions and what’s inside of me and take it with you, Akron. I’m calling on you all to represent.”

Blake encouraged the groups to join together and not let egos hinder momentum. 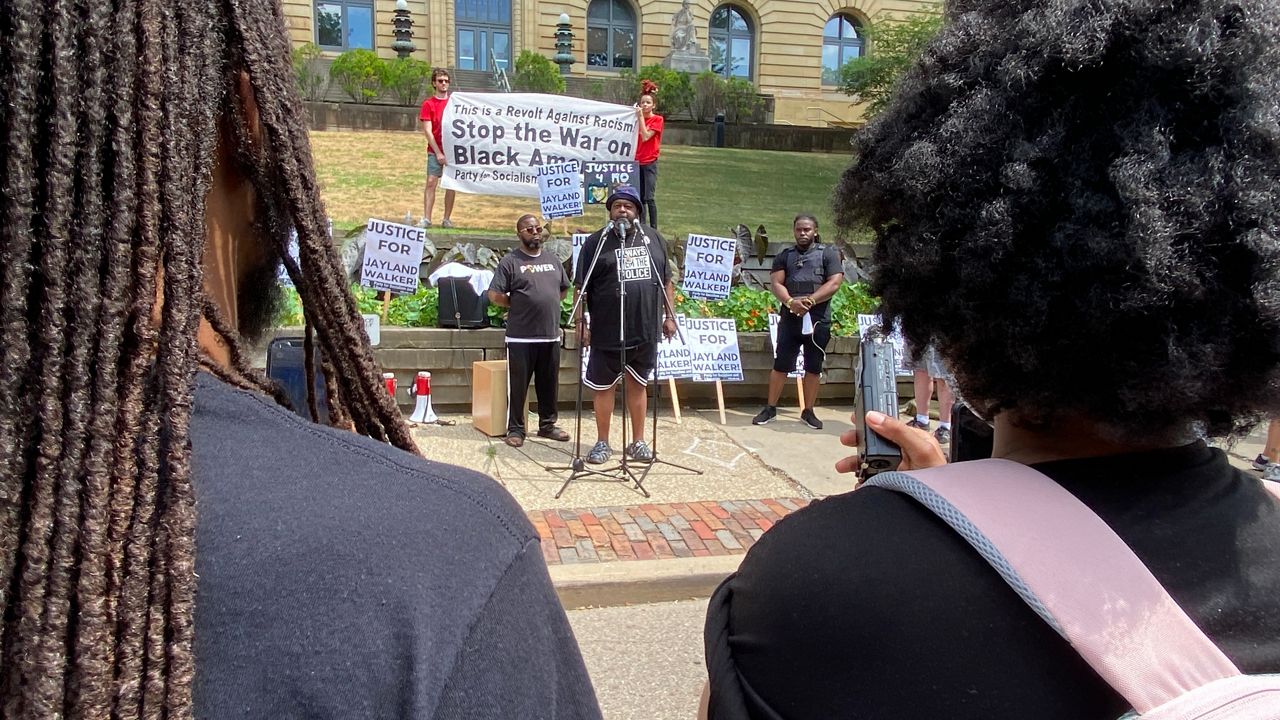 Jacob Blake Sr., whose son Jacob Blake was seriously injured by police in Kenosha, Wisconsin in 2020, urged those gathered to work together and forget their egos. (Jennifer Conn/Spectrum News)

“We must stick together and unite,” he said.

The unrest in Akron has led the city to reinstate a curfew for downtown. It was originally initiated July 4. The city had cancelled the curfew on July 6, but put it back into effect within two days.

Akron City Council will hold its upcoming meeting on Monday, July 10 remotely and has a sign-up for residents who wish to speak during the public comment period. Residents must sign up by 4 p.m. Monday.

Akron Municipal Court was closed for most of last week and events at Lock 3 Park in downtown were moved to other venues. It is not known whether the courthouse will remain closed in the coming week.