'Who deserves to live like this?' Here's how Summit Co.'s 1st Continuum of Care director plans to combat homelessness

AKRON, Ohio — Most communities battling homelessness know the challenge is complex, and requires a multifaceted approach to make even a dent in the numbers.

An Akron native, Boddie’s education and experience seem custom-tailored to the goals of the Summit County CoC and the structured partnerships necessary to get the work done.

CoCs are a program of the U.S. Dept. of Housing and Urban Development. HUD mandates that counties receiving HUD funding to fight homelessness strategize and create a plan that addresses housing issues and works to keep people from returning to homelessness.

In Summit County, the CoC comprises more than 30 member agencies that provide an array of housing types and supportive services, and must work in partnership.

Each year, the CoC distributes about $5 million to the member agencies to move people into housing with support that meets the individual's specific needs to keep them from returning to the streets.

Among Boddie’s strengths is her big-picture experience with housing insecurity, viewing the problem from the viewpoint of both the support agencies and the homeless.

Growing up in Akron’s economically disadvantaged Summit Lake neighborhood and raised by a single mom, Boddie said she has witnessed the effects of housing insecurity since her childhood.

“As a teenager, I lived a little better than some of my friends but I can still resonate with a lot of that,” she said. “I have friends who still have those struggles. Who deserves to live like this or be treated this way?”

According to the CoC’s annual report, nearly 6,000 people in Summit County received services through CoC agencies in 2019 and 2020, including more than1,300 children. 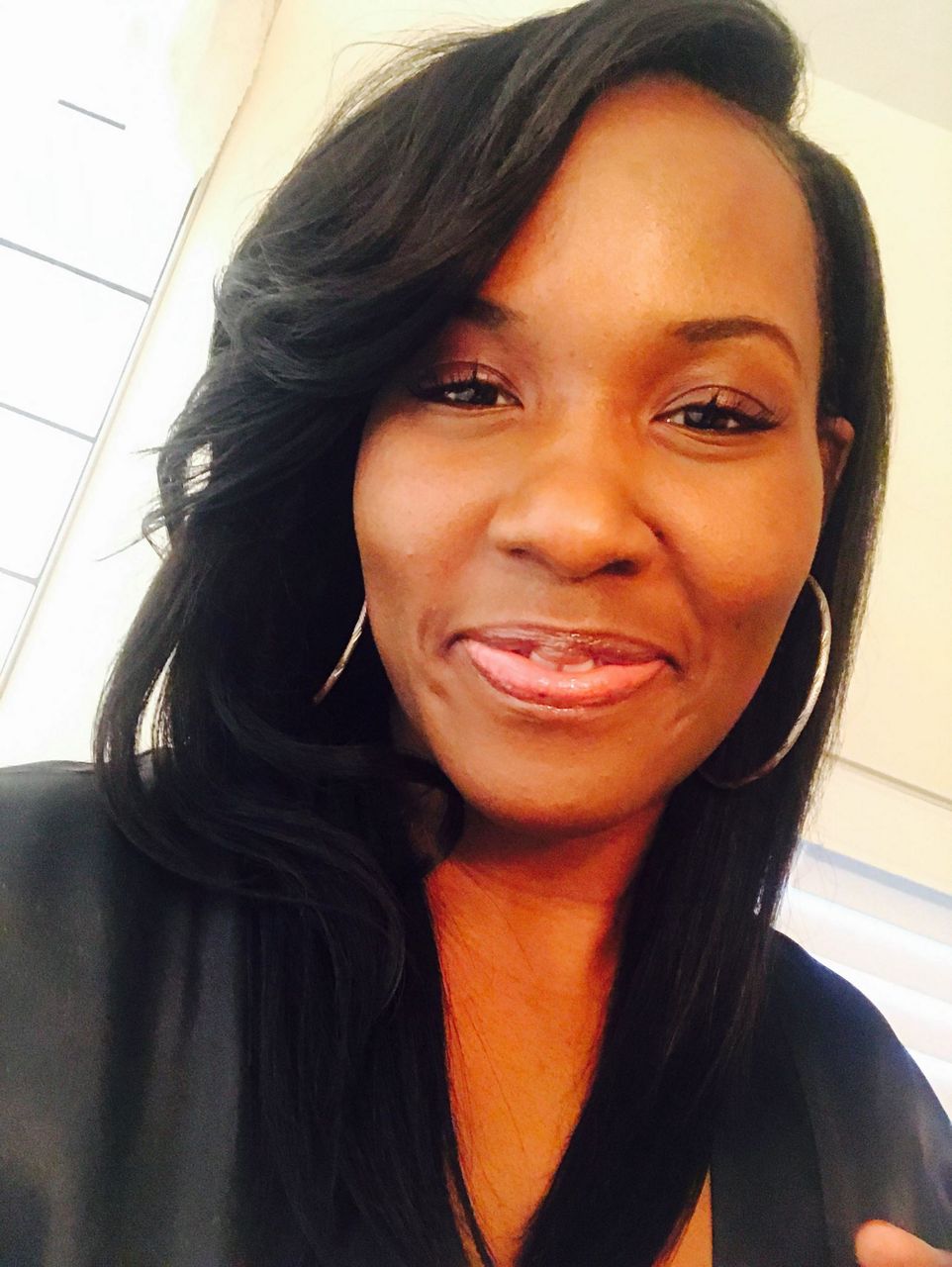 Boddie didn’t plan to work in social services. After graduating from Garfield High School, she went to the University of Cincinnati for medical school. When she realized chemistry wasn’t her thing, she shifted to business, and earned a bachelor’s degree in Business Administration with a concentration in accounting.

“I'm really good with numbers and I always have been naturally so it just worked for me,” she said. “I love budgeting and really understanding how money works, how to manage it.”

While in college, she gained hands-on experience at Strategies to End Homelessness, Hamilton County’s Continuum of Care. There she oversaw compliance, managing accounting for the agencies funded under the CoC umbrella.

After 12 years in Cincinnati, Bodie returned to Akron and was hired at the Akron Summit Community Action Hub. There she worked on a substance-abuse hotline, collecting data around opiate abuse and infant mortality.

“There's a very large rate of African-American women specifically who have children who are dying before they're born or in that first year,” she said. “There was so much going on with the opioids and so many people were dying.”

“I just knew that would be a good fit for me,” she said. “That's part of the reason why I wanted to come back, because it's great to make a difference.”

When Boddie took the CoC reins in 2017, there was no office or staff. A single mom of three, she worked at her kitchen table and sometimes in her car, organizing all the pieces.

At first, the position was a “glorified assistant,” she said, someone to keep paperwork organized and reports filed on time. She stayed motivated by thinking back to the phenomenal work being done at Hamilton County’s Continuum of Care.

“I knew that there was an opportunity to create a system here for Summit County, to really do the work for homeless people and really make an equitable process,” she said. “I saw the vision early on, which is why I was able to take the job and run with it. And I don’t want to say I was okay, working out of my car. Because some days, it was really tough.”

With strong support from the city and county, she gained her footing and transitioned from assistant to strategist.

“I was starting to become a leader, saying ‘okay, what do I need to do the job correctly?’” she said. “And it just became this really robust system, you know. We started working with United Way and creating more triage and just it grew honestly right before my eyes.”

Among Boddie’s goals is to see Summit County become a model for ending homelessness, she said. And she sees the tide turning, as more organizations that can help are getting involved.

Boddie also now has real office space and a staff of six. Under her leadership the CoC has launched several new initiatives.

“As an African American woman, I'll say one of the things that is extremely important to me is to make sure that everybody has access to the system,” Boddie said. That access extends to young, homeless LGBTQ+ community members.

“LGBTQ plus in our community is underserved significantly, disparities for housing, for food, for medication, just so many things,” she said. 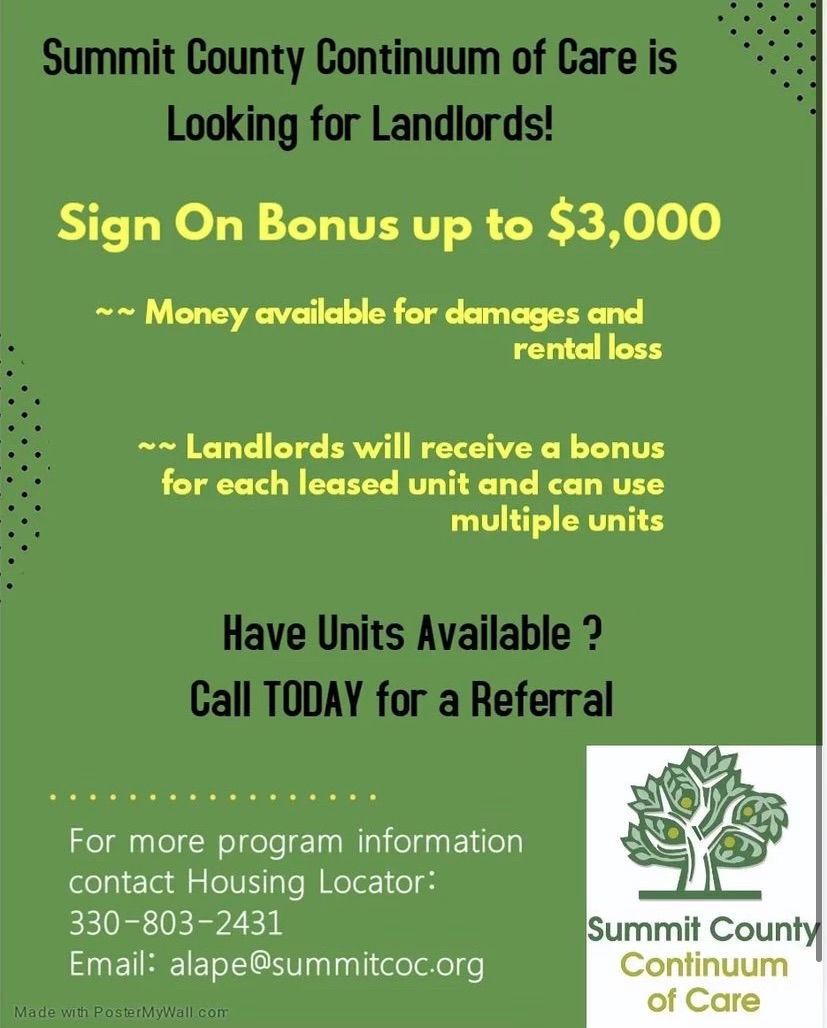 The CoC is actively recruiting landlords with spare units to rent. (Courtesy of Summit County CoC)

To specifically reach that population, the CoC partnered with the Bayard Rustin Center for Social Justice and the Akron Aids Collaborative to launch the LGBTQ+ Resource Center, which provides services for Black LGBTQ+ residents but welcomes all races.

“We have a lot of collaboration going on right now,” she said. “I think in the near future, we're going to see a lot of things change.”

The CoC also created a Youth Advisory Board of formerly homeless people 18 to 24 to help with outreach, hosting events to help young homeless people all around the county.

Another new program is designed to overcome barriers that keep landlords from renting to the homeless. The CoC is partnering with landlords, offering a $3,000 sign-on bonus and mitigation to cover any damage to the units and for rental loss, Boddie said.

“We're doing the work for the people,” Boddie said. “We are really here to make sure that people are getting access to housing, that they're allowed the same access as everybody else.”

Taking it a step further, Boddie went back to school to learn about real estate, which dovetails with what she believes a continuum of care should be, she said. The goal has been to get the homeless into stable housing, but Boddie wants more for them wherever possible.

“People shouldn't have to rely upon other people to be able to survive in this world and that's what we're currently doing,” she said. “So when you think about the continuum, I think we're missing a piece right now. And that's ownership. Then we're really completing that full circle.”