First Fridays in Kenmore are a celebration of the neighborhood. (courtesy of Kenmore Neighborhood Alliance)

Kenmore resumes First Fridays celebration of neighborhood on the Boulevard

AKRON, Ohio — The Kenmore Neighborhood Alliance (KNA) is working to jump-start its pre-pandemic momentum, inviting the community back to the Kenmore Boulevard business district this week.

KNA will resume First Fridays, a celebration of the neighborhood, Friday, June 4, from 6 p.m. to 9 p.m. The popular monthly, outdoor celebration of the southwest Akron neighborhood will offer music, food and free family fun on the Boulevard. During First Fridays, businesses keep their doors open later, while free outdoor movies, craft vendors and live concerts are also planned.

Kenmore Boulevard, known for its many music and arts businesses, also has restaurants and bars, barbers and salons, retail shops, nonprofits and hobby stores. The Boulevard is one of Akron’s Great Streets Districts.

Great Streets works with neighborhood development groups like KNA to bring business and vibrancy back to 10 of the city’s small-business districts. The program offers facade-improvement grants and low-interest loans, and makes improvements to the district’s infrastructure.

Just before the pandemic closed down communities, Kenmore Boulevard was added to the register of historic places by the National Park Service, Boyes said.

Now, KNA is seeking proposals to design, construct and install elements of a plan for Boulevard improvements, developed by Akron’s Environmental Design Group with input from residents and businesses. 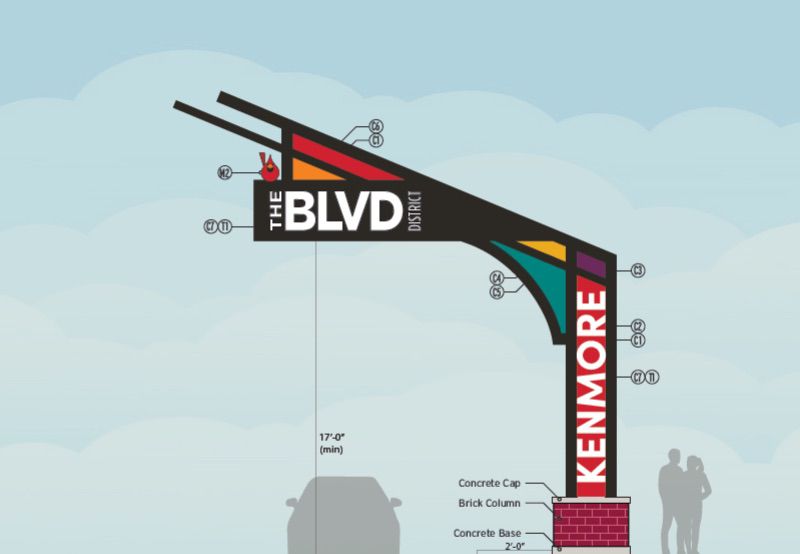 New branding will appear on wayfinding in Kenmore. (courtesy of Kenmore Neighborhood Alliance)

The goal is to create a sense of place in the Kenmore Boulevard Historic District, Boyes said. https://www.betterkenmore.org/post/federal-designation-positions-kenmore-boulevard-for-historic-investment

“Kenmore is a fun, creative place with a lot of history,” she said. “We believe signage on Kenmore Boulevard should evoke pride in residents and reflect our fun, creative nature to the broader Akron community.”

New district pole banners, artistic threshold signage, and a gateway mural on the Manchester Road underpass over Kenmore Boulevard, are planned, she said. The signage is designed to connect neighborhood amenities to the nearby Towpath Trail and Summit Lake, as well as the Kenmore Leg of Route 224.

The signage will include new branding featuring a bright red cardinal adopted earlier this year after a city-wide design competition, she said.

Kenmore was a town with a high school before it became part of Akron, Boyes said. Keeping the cardinal as part of the neighborhood’s identity is important to families with deep roots in the community.

Businesses are eager to draw the community back to Boulevard as well, said John Buntin, who has owned Kenmore Komics & Games on the Boulevard for 34 years.

“Hopefully, with the attitude that people have right now, they want to get out and see the world again, and we'll start seeing a lot more people down for this year's First Fridays,” he said. “And I do believe there's a bunch of people that are looking forward to this.”

Buntin approves of the newly designed branding and KNA’s efforts to rebrand the Boulevard, he said.