CLEVELAND — Cleveland will be one of 15 major U.S. cities to host an Immersive Vincent van Gogh exhibit in September.

The exhibit will run from Sept. 9 through the end of the year. Presale tickets are available online now.

The van Gogh exhibit enables viewers to experience an artistic genre blending animation, fine art and original music. So far, the exhibit has been experienced by more than 300,000 people in the U.S., said producer Corey Ross of Lighthouse Immersive USA.

“This is a completely unique way of encountering art,” he said.

But the exact location of the Cleveland exhibit won’t be announced until mid-April.

“The interesting part is that in finding a location, we were looking for a spot that had at least 500,000 cubic feet at a minimum and ceilings of 35 feet,” said promoter Rita Russo. “That was a little more of a challenge. But we've been finding some fun, unique places in cities across the country.”

Debuting in Paris, the exhibit was featured in Season 1, episode 5 of the Netflix series "Emily in Paris."

The exhibit was created by Italy's Massimiliano Siccardi, who has pioneered immersive exhibitions across Europe. Siccardi has been artist-in-residence at the Carrières de Lumières – Atelier des Lumières since 2012, designing the stage and settings for numerous immersive shows, including video mapping of Italy’s Basilica di Giotto and Teatro Petruzzelli of Bari opera house, where his permanent installation depicts a virtual re-construction of the frescoes of the Cupola.

Artistic director for the van Gogh exhibit is Vittorio Guidotti and the music was composed by multimedia composer Luca Longobardi. 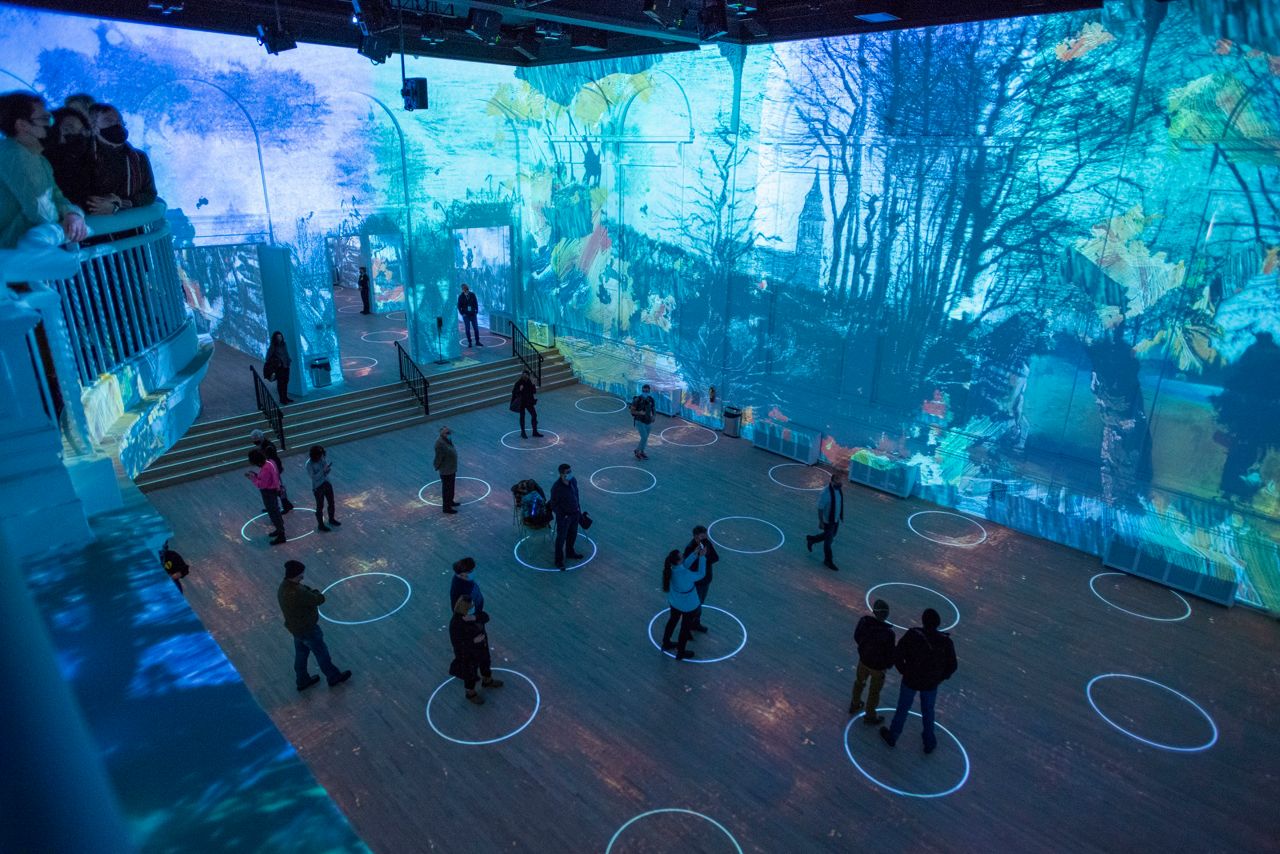 Ross describes the exhibit as an animated 360-degree film protected onto the floors and walls of the exhibit space. The audience participates by moving through the space, becoming part of the projection, he said

In designing each exhibit, Siccardi incorporates the unique architecture of the building, laying out a network of fiber optic cables, which in Cleveland will be throughout an industrial space, Ross said.

The artwork is then digitally enlarged to towering projections composed of 90 million pixels, which are then animated.

“The combination of those three elements creates really an interesting and unique medium,” Ross said. “That's what struck me, beyond the emotion of the experience when I saw it in Paris. I was really witnessing a new medium and you don't do that very often.”

The sheer magnitude of the exhibition illuminates van Gogh’s signature brush strokes, and the minute details and colors he used, evoking the artist’s emotional and chaotic inner consciousness, he said.

“All of a sudden, the brushstrokes, the paint speckles, all of the features of the art, all of van Gogh's technique, becomes visible, so if you're a bit of a technique geek, this is a completely interesting and unique way just to focus on van Gogh's technique,” he said. “But ultimately, what Massimiliano does is he animates that, so all of a sudden, the pieces come to life and clouds are going by and the sky and sunflowers are swaying in the breeze and stars are twinkling. And all of this is choreographed to music, so it also becomes quite an emotional process.”

The concept for the show is Siccardi’s interpretation of what might have passed through van Gogh’s mind in the moments before he died, Ross said. 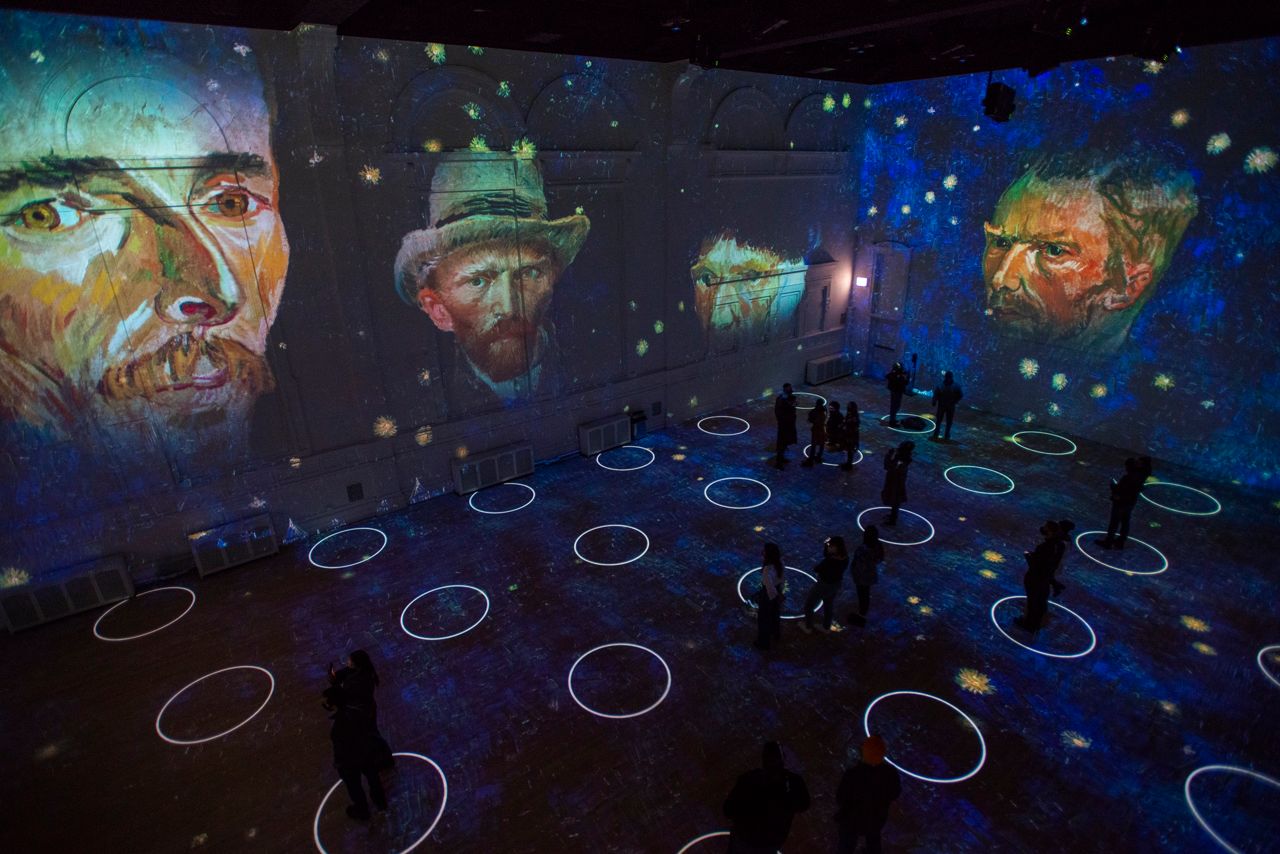 ”And what's amazing about this is that you get to see something that's completely fresh, a new medium,” he said. “From that, comes a stream-of-conscious narrative that takes you into the mind of van Gogh; you go on this journey.”

The exhibit has received positive reviews from the Chicago Tribune, which said, “entire rooms pulse with imagery and emotional resonance,” while the San Francisco Chronicle wrote, “After a year without big, splashy art happenings, this is a huge, indulgent way to dive back in.”

“Despite being unknown throughout his life, van Gogh's artwork has created a lasting impact through its emotional richness and simple beauty," Siccardi said in a release. “Both myself and Luca Longobardi are very excited to visit Cleveland and once again bring van Gogh's legacy to life in a way that embraces this city's one-of-a-kind energy."

The exhibit is an hour-long, timed-entry event, which visitors walk through without the need to touch any surfaces. Other safety precautions include touchless ticket-taking and hand sanitizer stations and temperature checks will be conducted at the door.

Markers will be visible throughout the venue to ensure social distancing and circles will be digitally projected onto the gallery floor to assist. Guests must wear a face coverings and capacity will be limited. Visit the event website to learn more.