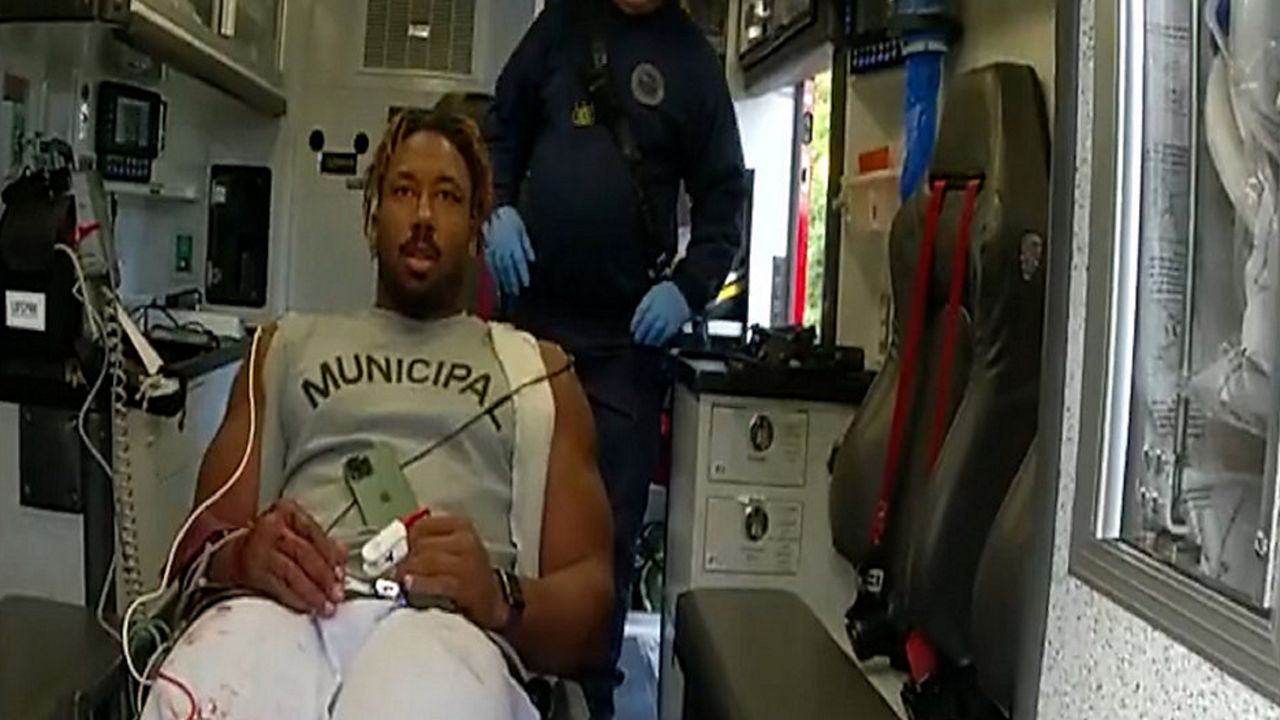 The Browns said the crash happened Monday afternoon, not too long after Garrett left practice in Berea.

According to the Ohio State Highway Patrol, Garrett and a female passenger were driving on State Road in Medina County near Wadsworth when Garrett’s Porsche went off the road, flipped and landed in a ditch.

“They came over that hill flying, went airborne, took out the fire hydrant, and rolled three times,” a witness is heard telling an officer in dash camera video, released by OSHP.

A big question still left unanswered: what caused the crash?

Body camera video, also released by OSHP, is helping to delve into that question.

In the video, you see Garrett inside an ambulance and talking with an officer.

Garrett told the officer that before the crash he saw a vehicle traveling in the opposite direction.

“I didn’t swerve, I don’t remember swerving out of the way of the car,” Garrett said.

The officer then asked if Garrett slammed on his brakes.

“I don’t remember that either,” Garrett told the officer. “I don’t know if something came and I moved out of the way of that.”

Various media outlets initially reported that Garrett swerved to avoid hitting an animal, though he made no mention of that in the video provided.

OSHP cited Garrett for failure to control his vehicle.

Officers calculated that he was going 65 mph in a 45 mph zone after Garrett suggested he reached that speed.

As for injuries Garrett sustained, the Browns said he thankfully didn’t break any bones, but that he did end up spraining his shoulder, straining his biceps and suffering a few minor laceration.

Meanwhile, officers said his passenger complained of an injury to her head.

Officers also said neither alcohol nor drugs were factors in the crash.

“Hopefully you heal up soon. Good luck man,” an officer said to Garrett.

The Browns said Garrett stayed home Wednesday to rest up, but returned to the practice facility Thursday, though remained off the field.

Looking forward to having @Flash_Garrett back in the building tomorrow 🙏

“Myles Garrett will not practice today, but I know it’ll be a day-to-day thing,” said Joe Woods, defensive coordinator for the Cleveland Browns.

“He looked happy, just to be able to see us all again. And I just told him ‘I love you and I’m glad you’re here,' ” said cornerback Greg Newsome II.

It’s still unknown if Garrett will play Sunday, Oct. 2, in Atlanta against the Falcons.