The University of Cincinnati Car Club's Cars and Coffee events attract hundreds of people every other Sunday. (Photo courtesy of UC Car Club)

UC Cars and Coffee offers gateway to next level of collectors, 'gearheads'

CINCINNATI — For a lot of college kids, having a personal vehicle is a luxury that keeps them from having to rely on carpools or public transportation to get around. But for Kyle Fugate and his friends, cars represent a lot more than that.


Fugate, 22, is co-founder and co-president of the University of Cincinnati Car Club.

For the past three years, the club has put on Cars and Coffee events every other Sunday.

What started as a collection of a handful of fellow UC students and friends’ souped-up cars in the parking lot of a park close to from campus has grown into a bi-weekly happening for hundreds of car enthusiasts from across greater Cincinnati.

More than 100 cars — of various types, makes and models — will be on display. 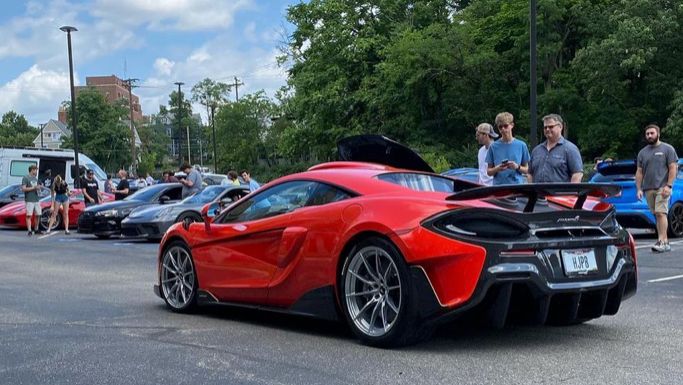 One of the cars on display at a UC Car Club event on Victory Parkway. (Photo courtesy of UC Car Club)

“I’m not sure what we were expecting when we started all this, but it’s great to see the success we’ve had so far,” said Fugate, who will graduate next semester with a degree in marketing. He’s not sure he wants to make cars a career just yet, but they’ve been a passion for a long time, dating back to when he was a kid.

Like a lot of so-called “gearheads,” Fugate’s passion for cars started as a little kid. He recalled memories of working alongside his grandfather to restore a 1960s Volkswagen Beetle.

Fugate and a high school friend, Calvin Proffit, grew up together in West Chester, a city about 25 minutes north of UC’s main campus in Clifton.

Proffit’s grandfather left him a BMW One-Series in his will. As a remembrance to him, Proffit poured his passion into that car.

As the two got older, their passion for automobiles grew. They became regulars at the Dayton-area Cars and Coffee events. Fugate said they rarely missed one during high school.

When they got to UC, they wanted to continue their passion for cars, but they couldn’t find a group that really fit their interests. They also met Jack Gardner, a classmate and car lover.

“We were sitting in their our dorm room and putting our heads together and said, ‘Why not create a UC Cars and Coffee?’” Fugate recalled. That was a little more than three years ago. It resulted in the establishment of UC Car Club, a student-run organization through the university.

The club takes part in a lot of events. One of Fugate’s favorites was heading to the Kil-Kare Raceway in Xenia Township, near Dayton.

There, they watch drag races and drifting. Drifting is a sport where drivers make their car perform a controlled skid sideways through a turn with the front wheels pointed in the opposite direction.

But their primary focus is their weekend car shows. They want to provide a platform for fellow enthusiasts to show off their rides, talk shop and exchange ideas. 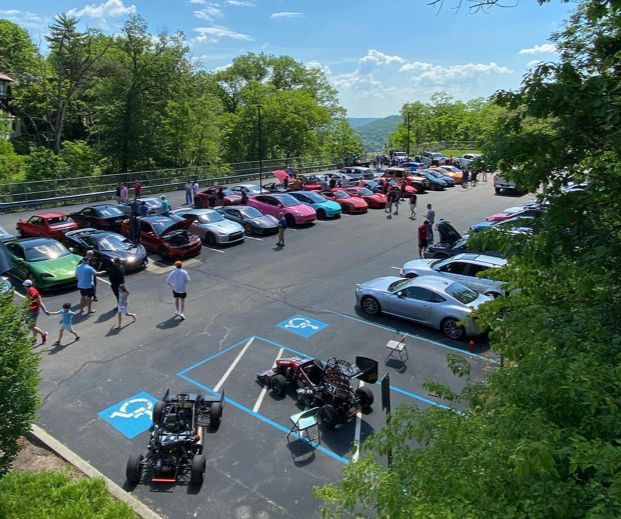 An aerial view of the parking lot on Victory Parkway where UC Car Club hosts its Cars and Coffee events. (Photo courtesy of UC Car Club)

“Each car and each car owner has its own unique story, and it’s really fun to learn about them,” said Fugate, whose personal story centers on his prized Toyota 86.

He’s “put every dollar (he) could find” into building out the little two-door Japanese sports car. Beyond trying to maximize speed and performance, he also wanted to have a custom look inside and out.

“You know, we’re just college kids and don’t have all the money in the world, but we love cars and we work with what we’ve got,” Fugate said. “We all sort of work together with what we have and it’s sort of stoked our passion, if you will.”

Not knowing what to expect, Fugate and his crew started Cars and Coffee in 2019 in the semi-circle parking lot of Bellevue Park, close to UC. It fit 15 to 20 cars.

Back then, that was more than enough space.

“I think we had maybe six cars for the first event,” Fugate said. Everyone who attended was a friend of his or knew Proffit.

But they kept holding events every other week and got to where they had to ask UC — which sponsors the club — to use a bigger space. The university gave them access to the lot on Victory Parkway that can hold up to about 200 cars, Fugate said, which they come close to filling every week.

Some people show up to take photos of unique cars to place on social media. Others are there to “just hang out.” But most people are there because they love cars and want to learn more.

“We’ve developed quite a following over these past couple years,” Fugate said. “You see a lot of familiar faces; students or faculty from UC and friends we’ve developed through these events. But we also get quite a few new people every week, which is really exciting because they always bring something new to the table.”

A roadway to the next generation of car

Part of the reason for that growth is UC Car Club’s connection to Cincinnati Concours d’Elegance, an annual exotic and luxury car event held every June.

Fred Jones, a representative for Cincinnati Concours, said the passion of the young men intrigued them and wanted to do their part to help. It also presented a unique opportunity to recruit potential future participants. 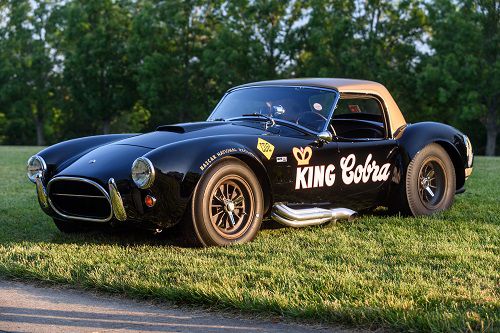 That last part is important, Jones said, as the vast majority of car and automobile collectors are older adults. They need the next generation to step up to ensure the hobby continues to grow.

“The car collection hobby is getting older and see Cars and Coffee as an opportunity to recruit younger folks, talk to them about cars and introduce them to what we do as a Concours,” said Jones, 75, of Fairfield. “These guys and girls are the future collector and coach builders.”

The Cincinnati Concours d’Elegance is one of the top classic car show events in the United States. Now in its 44th year, Cincinnati Concours features an entire weekend of events for car lovers — ranging from a VIP show inside an airplane hanger at Lunken Airport and a two-hour countryside car tour around greater Cincinnati.

Many members of UC Car Club join Cincinnati Concours and other hobby groups for rallies all around the state. Though, keeping up with some of the top-end speed cars can be a challenge.

“We plan a route and try our best to keep up,” Fugate joked.

But it culminates with hundreds of exotic cars displayed in the formal gardens of historic Ault Park, with a classic pavilion overlooking the show field, hosting an automotive art show, brunch and beer garden.

Events associated with Cincinnati Concours will take place June 11 and June 12 and benefit the Arthritis Foundation. The show at Ault Park is June 12.

The featured theme for this year is “European Luxury vs. American Luxury” and will celebrate the great marques of luxury automobiles. Each show has 13 standard classes, but they also have specialty categories.

The show has introduced several innovations, such as the first regular classes of motorcycles (2000) and Asian collector cars (2006). Fugate is a fan of the Japanese cars from the ‘90s.

The specialty classes are one way they can attract young fans, Jones said. Not all the Concours supporters may have been on board with the sub-classes at first, Jones said, but they’ve gotten used to it. 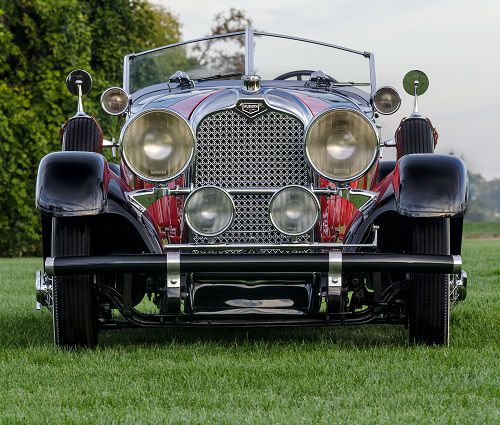 “They had to get over that a long time ago,” he added. They realize that they’re on the downside of their hobby and we need to find folks interested in cars to carry on the tradition.

Many of the cars on display at the typical Concours are out of the price range of almost all these kids, Jones said. But they view it to inspire them to become lifelong hobbyists, so when they’re older, they’re picking up the torch.

Jones hopes some of the UC students or other young people who attend this weekend’s Cars and Coffee will either volunteer or decide to attend the events as guests. Student tickets are $15.

“The goal is to continue a tradition showing cars. It’s getting more difficult every year as people are getting older,” Jones said. He knows a lot of the current collectors will not be around forever, so they’re trying to find the next generation of enthusiasts to help pick up where they left off.

Cincinnati Concours events around the country are suffering from the same issue, trying to find younger audiences to take part and attend the events. It’s not just showing or collecting cars, either. They’re also training them to help judge down the road.

“We’re inviting these kids to the concours to expose them to some of these classic cars, teach them how to judge and get them introduced to the Concours,” Jones said. “They’ll be running this thing soon enough and we’re excited to hand off the baton.”

Fugate considers it an honor to be thought of as the “next generation,” Fugate said. He tries not to consider age or gender or social status when talking about cars, Fugate said. After all, they’re all “gearheads.”

“We just all love cars and car culture,” Fugate said. “Pardon the pun, but we’re all driven by this passion to meet these amazing people, to work on cars together and just be around some amazing vehicles.”