CINCINNATI — It was 2014 when Candice Matthews Brackeen developed the idea for her first tech company — a cellphone app called Hello Parent that aimed to help parents better connect with their children’s schools.


To get her app off the ground, Brackeen took part in a series of meetings with prospective investors to secure funding and other support for the project.  Such venture capital pitch meetings were far less common for startup companies in the Midwest than in Silicon Valley.

Brackeen, herself a young mother eight years ago, ended up getting a meeting with UpTech, a startup accelerator in Northern Kentucky.

The meeting went well — the app became a national safety technology partner of the Brady Campaign to Reduce Gun Violence — and provided Brackeen with enough money to fund her company. But something didn’t sit well with her.

Brackeen, who’s currently the CEO of Lightship Capital, said less than 1% of all venture capital goes to Black-led companies. Those numbers are “just as abysmal” for other “minority groups” and women overall.

“It's lonely being the ‘only,’ so I wanted to do something about that,” said Brackeen. She created the Cincinnati Chapter of the Black Founders Network in 2015, a group that met monthly to connect and share their respective networks.

They also hit the road as a group, heading to the major tech events such as CES and South by Southwest but also Black Tech Week and Afro Tech, as well.

One of the other women involved was Natasia Malaihollo, the CEO of Covington-based Wyzerr, a data and survey company. Brackeen helped the startup raise $1.5 million.

“Candice hosted a happy hour when we first moved to Cincinnati to show us that there were other people of color in the city that were doing the same things we were,” Malaihollo said. “She built a little support group for us when the startup life got hard. It felt like a little family.”

The founders group sparked the idea for the Hillman Accelerator. Its purpose was to help would-be entrepreneurs learn how to navigate the challenges facing new businesses.

“We want to make sure that remarkable people are getting a chance to have a seat at the table,” Brackeen said.

Many long-term, systemic issues contribute to the lack of Black business owners. For example, less than 3% of all capital managers — essentially the people who decide which companies to invest in — in the United States are women or people of color.

“People have a tendency to invest in people they know, like and trust and are from their own network,” Brackeen said.

That's why, when you look at the portfolios of many female “angel investors,” about 70% are earmarked for businesses with women in leadership roles, she added. 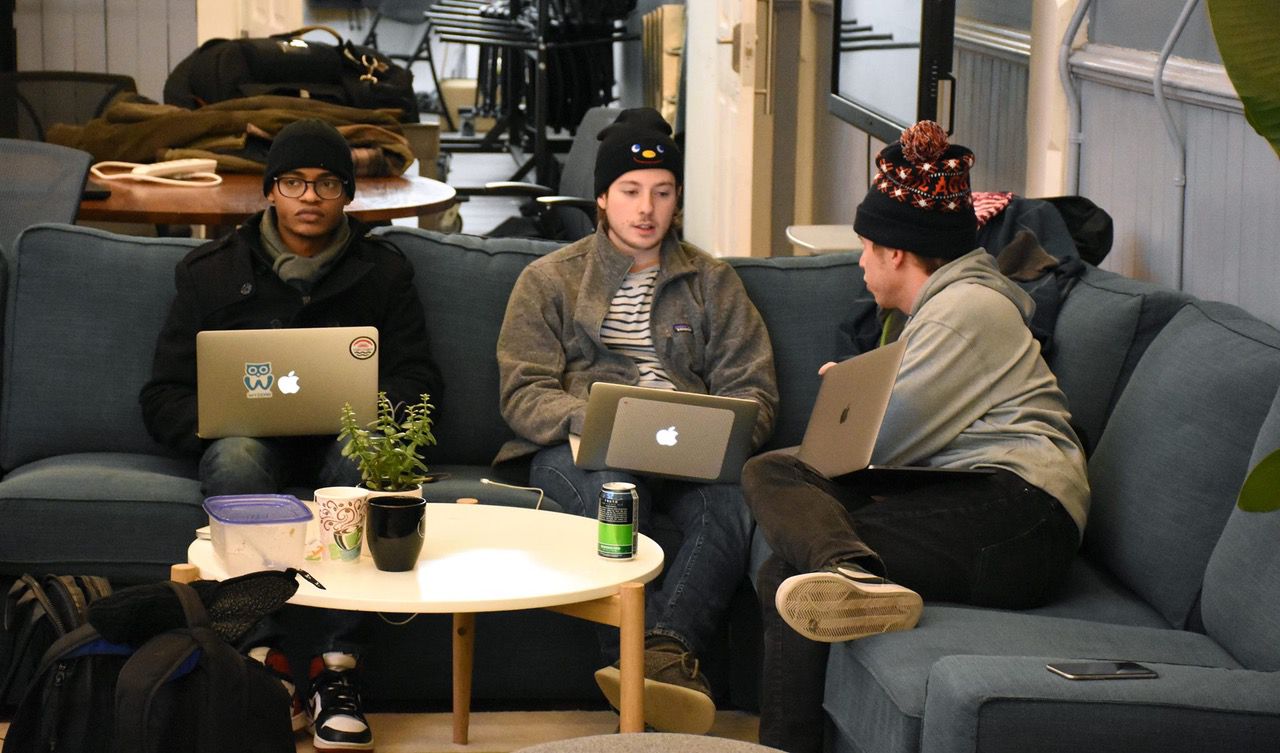 Brackeen doesn’t think most major investors are inherently racist. But capital rarely moves in large amounts without approval from an investment committee, and those decisions often require a consensus.

“While I truly believe that most Americans are good people, not everyone can see their own biases.” Brackeen said.

As an example, Brackeen recalls people asking her in investment meetings what her parents do for a living.

“Well, if you looked at what my parents did, I was definitely not prepared to do this work, if that's what you're thinking,” she said. “But I also know other people whose parents did quite well and their children aren't quite ready for the world, either.”

Pete Blackshaw, CEO of the local business accelerator Cintrifuse, used words like “inexcusable,” “unacceptable” and “embarrassing” to describe the amount of capital that is going to female- or minority-led firms.

But Blackshaw said Brackeen is helping to change that narrative along with perceptions of what it means to be a founder or tech investor. He got to see her “walk the talk” firsthand while the two worked at Union Hall in Over-the-Rhine.

Creating the change they want to see

After a few years, Brackeen and her husband, Brian, sought to expand their professional footprint.

In 2019, they started Lightship Capital, a venture capital firm that supports the growth of tech-driven startup businesses led by women and FOCs (Founders of Color). It’s the largest first-time fund raised by a Black woman investing in minority founders across the Midwest.

They also run the Lightship Foundation, which assists startup businesses led by women, FOC, and those representing the LGBTQ and disabled communities. Its clients range from pre-revenue stage to those preparing for investment readiness, with Lightship providing education and access to network and funding opportunities to drive growth within the minority business community. 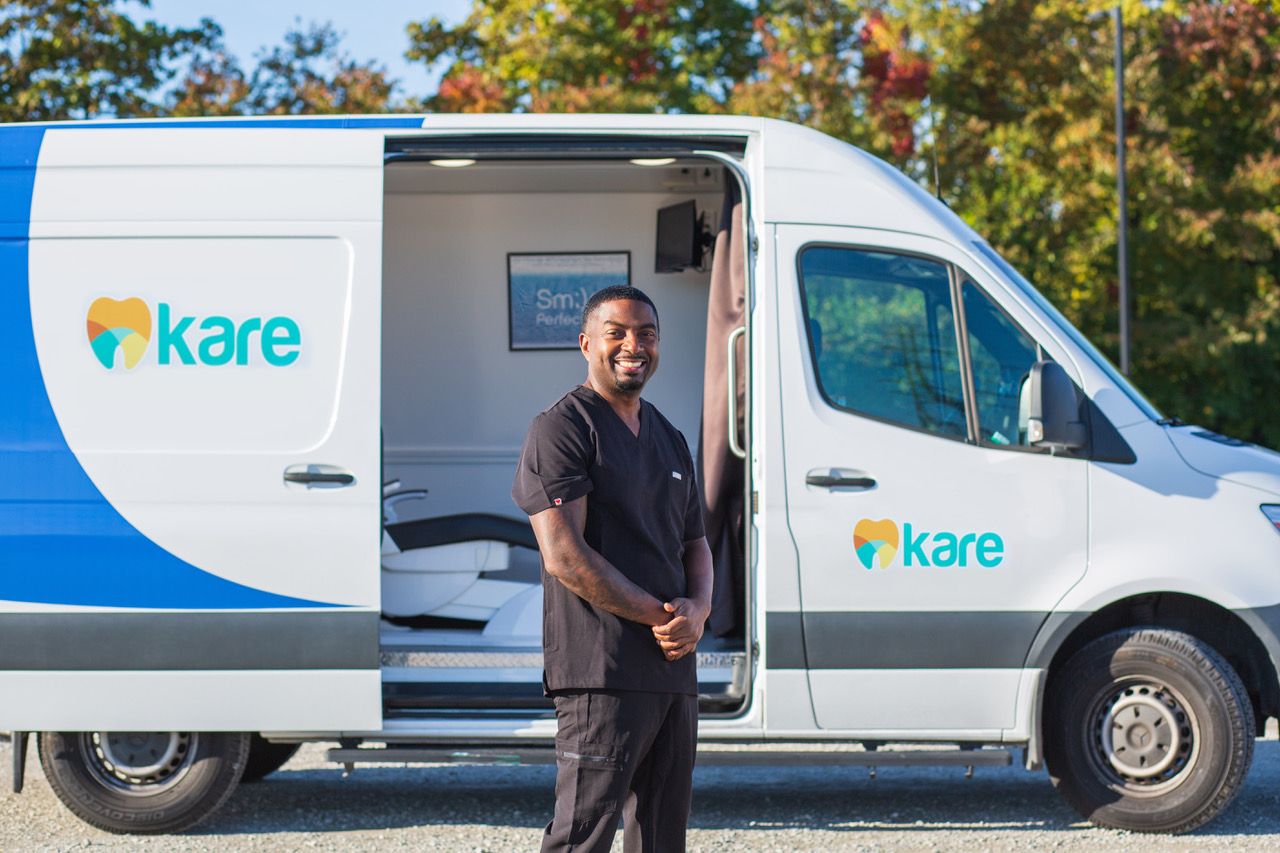 In a little more than four years, Lightship has guided more than 200 companies to more than $120 million in venture funding across the United States.

One of those companies is Kare Mobile, a mobile dentistry company based in Louisville, Kentucky. Kare developed an app that connects users to a dentist based on location, availability, insurance, and the type of procedure needed.

Dr. Kwane Watson founded Kare. He's a dentist who first recognized a need for better dental care access when he was working for an insurance company and traversing the state by car.

He initially built Kare as an app to better connect people to available dental care. But in 2018, Watson expanded the business to provide mobile dental services directly to patients.

It was challenging to find venture capital to finance the expansion, he said. Until he met the Brackeens.

Watson took part in Lightship Bootcamp, a week-long series of meetings, educational instruction and seminars for business owners. It also allowed him to meet other entrepreneurs in similar situations.

Lightship was actually the first entity to give funding to Kare Mobile during the company’s seed round of funding – the “get off the ground” money that businesses rely on.

“We made an investment in that company and in its founder, not only for social good, but also to just give all Americans better access to dental care,” Brackeen said.

Kare has scaled up fast. In 2021, it began the option of creating licensees in other regions across the nation. They've created relationships in five different states within the last 14 months, and soon will have offices in Cincinnati, Watson said.

“If it wasn’t for Candice, Brian and Lightship Capital, I would’ve never had the opportunity to be one of those 1% founders,” Watson said. “Without their connections, without their relationships, without their mentorship… I wouldn’t be where I am today.”

People, places and all the things

Brackeen wants to make Ohio and the Midwest a top destination for technology startups and venture capitalists.

She’s especially a fan of the Queen City; it’s where she grew up and went to school. She attended the University of Cincinnati where she graduated with a degree in economics. The city is “home” for her family – her husband and her two teenage sons. 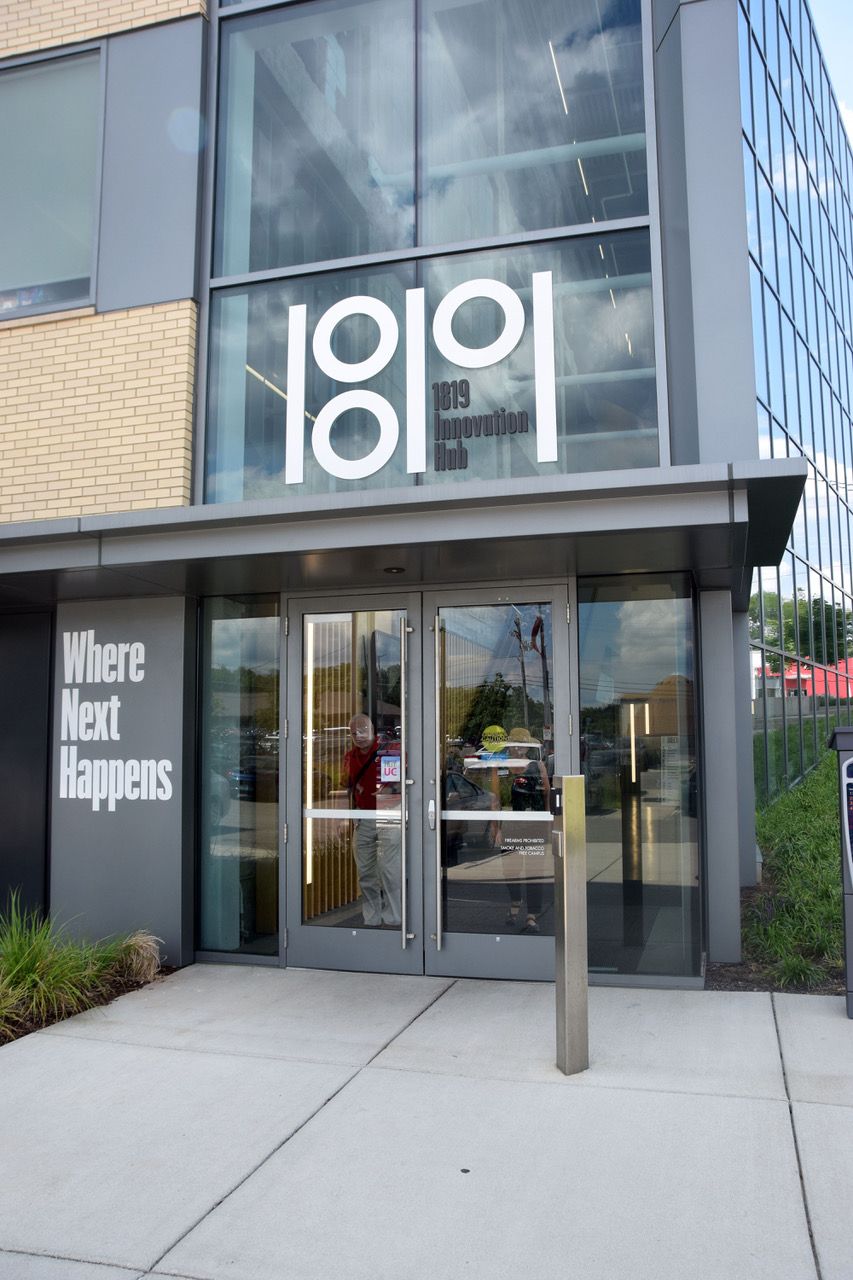 Despite Brackeen's love of Cincinnati, the city is still trying to overcome its perception in the broader tech community as a bit of an underdog.

But she’s working to change that. She’s doing so through a mixture of investments and also just bringing as many potential clients and business associates to town as she can. It has to do with exposure, too.

“They’re always so surprised when they visit how much there is to do here. And I’m always like, ‘were you expecting a lot of cornfields?’ said Brackeen. She added that her guests love the energy in OTR and the riverfront.

Brackeen is trying to bring that same local focus to her investments as well. Although Lightship will invest in companies anywhere in the United States, they say no to startups based in New York, Boston and San Francisco. Those areas get enough attention, Brackeen said.

Instead, Lightship invests primarily in companies based in the Midwest and the South. Firms based in or willing to relocate to Ohio, Tulsa, Oklahoma, or Arkansas are given special consideration.

Cincinnati is well positioned because of the investment in entrepreneurship that’s come from the State of Ohio, Brackeen said, namely Jobs Ohio and the Ohio Third Frontier program.

“It was when CincyTech started, when Blue Chip and Queen City Angels kind of got extra capital to boost them, that we started seeing more of this activity,” she added.

Blackshaw said Brackeen has the ideal startup mindset – “a get it done, make it happen mindset. And that's precisely what Cincinnati needs.” Cintrifuse was one of Lightship’s early investors.

And Lightship is already making a significant impact in Cincinnati. Blackshaw described Lightship as a “major building block” of the University of Cincinnati’s 1819 Innovation Hub in the heart of the city’s “Innovation Corridor.”

“Lightship is putting Cincinnati on the map in terms of being a potential hub for Black entrepreneurs and founders,” Blackshaw added.

The Candice not everyone gets to see

Brackeen described herself as having always had the “entrepreneurial spirit” – a drive to create and do her own thing. She jokingly attributed her self-diagnosed ADHD gives her the energy to run multiple businesses.

“I've always been the kind of person who wanted to try and do my own thing,” she said. 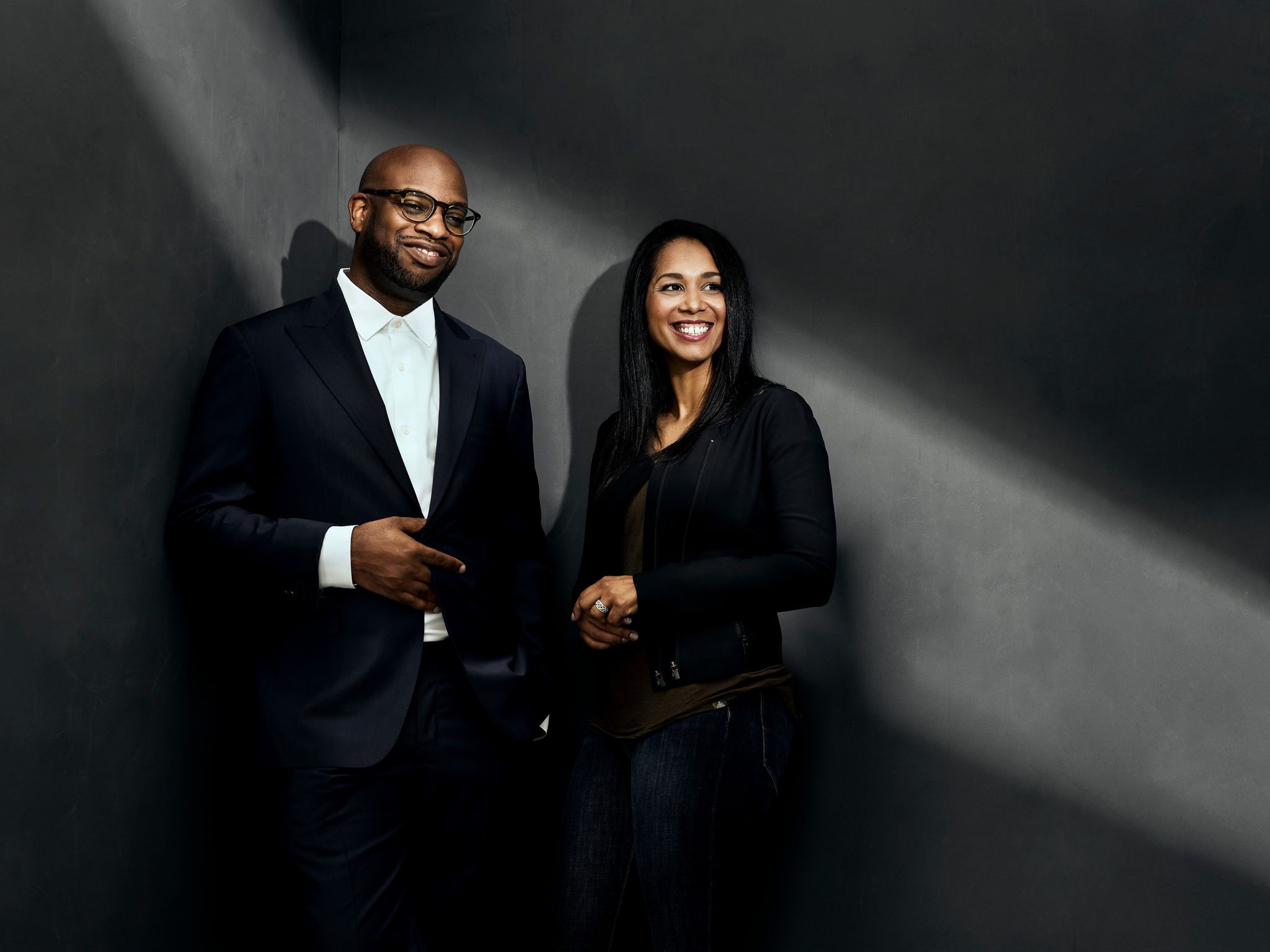 Candice Matthews Brackeen and her husband Brian pose for a photo. (Provided)

But Brackeen hasn’t always been comfortable with the labels associated with the job. In fact, until this year she didn’t want to use the title “CEO” to describe her position. Instead she used other terms, such as “founder” and “executive director.”

That may come as a surprise to some who’ve read about Brackeen’s company over the years.

“I think it’s finally time to step into my power,” she said.

Brackeen feels it’s both an honor and a burden to be dubbed a game-changer.

“It's day-by-day, how I see it,” Brackeen said. She describes herself as a mom, an eager-to-learn home chef and a huge NFL football fan.. She’s been watching the NFL Draft since 1999 after finishing up high school. She’s even made the trip to Indianapolis three times to watch the NFL Combine in person.

But that’s not always how the rest of the world sees her.

“I think people only know me for freedom fighting or business. And I'm like, ‘I like football, I have kids, I’ve got a cat.’” she added. “I like to cook, I'm vegan. I love it, but sometimes I think I'm constantly that angry Black woman shouting about disparity.”

While the work isn’t easy, Brackeen said she’s spent her professional life preparing to carry this torch and to help others get to where they want to go. She said her background best positions her for the job.