CINCINNATI — Cincinnati Public Schools will return to remote learning this Wednesday due to ongoing staffing challenges caused by a recent local surge in COVID-19.


The Cincinnati Board of Education voted 6-1 Monday night in favor of the plan proposed by CPS Interim Superintendent Tianay Amat and the district administration. Eve Bolton, a longtime board member, was the lone “no” vote. She favored a school-by-school approach and wanted to keep kids in the classroom.

CPS made the decision to wait until Wednesday to give parents time to make any necessary arrangements. They sent out notifications late Monday night.

The plan calls for a tentative return to in-person learning Monday, Jan. 24. CPS said in a statement that the timeline is contingent on staff levels being sufficient to “safely reopen schools” at that time.

The schedule affects seven school days. All 65 CPS schools will be closed — and there will be no virtual learning — on Monday, Jan. 17 in observance of the Martin Luther King Jr. holiday.

Ben Lindy, the board’s new president, tweeted after the meeting that it was a “very tough decision” in part because he knows the importance of in-person learning. He said, though, that responses by parents and caregivers to a recent school survey and data provided by the CPS administration were “very persuasive.”

Very tough decision for me tonight bc I am deeply committed to in person learning. The parent perspective in our survey and the staffing numbers by school provided by CPS admin were very persuasive. We are planning to return on 1/24 (as staffing allows).

Roughly 10,000 parents or caregivers of CPS students responded to the survey. Of them, 53% favored going remote district-wide while 47% preferred making the decision based on the needs of the particular school.

The student was also sent to high school students and CPS staff.

Of the 1,250 or so students who took part, 55% preferred having all schools go remote, per CPS data. The data showed that more than two-thirds of the roughly 3,100 staff members who responded preferred the district-wide approach as well.

In their presentation Monday night, CPS said 786 of their employees called in sick last Thursday, Jan. 6. That surpassed the total of 780 absences when the school district went remote in November 2020.

That same day the overall student absentee rate hit 25% and a record 1,475 students were in quarantine, according to the presentation. Cincinnati Public Schools has about 36,000 students between preschool and 12th grade.

The school board first discussed the possibility of going remote last Monday following news that well over 300 staff members had to call off work due to COVID-19. To cover the deficit, the district had to shuffle 60 administrative staff members from its central office across several schools in order to keep 11 schools from having to close that day.

Those numbers have continued to climb as have the number of cases in COVID in the greater Cincinnati community. On Monday, the Cincinnati Health Department reported 852 new cases in the city. Cases in Cincinnati have topped at least 800 several times since Jan. 1, topping out at 987 on Jan. 6.

Spread is being blamed in part on the highly contagious nature of the omicron variant.

As of Thursday, 62 school bus drivers have filled in for non-teacher related positions — things like security personnel and paraprofessionals. CPS also is relying on 30 temporary employees for and parent volunteers to help cover lunch periods. Twenty-three school nurses are out as well. 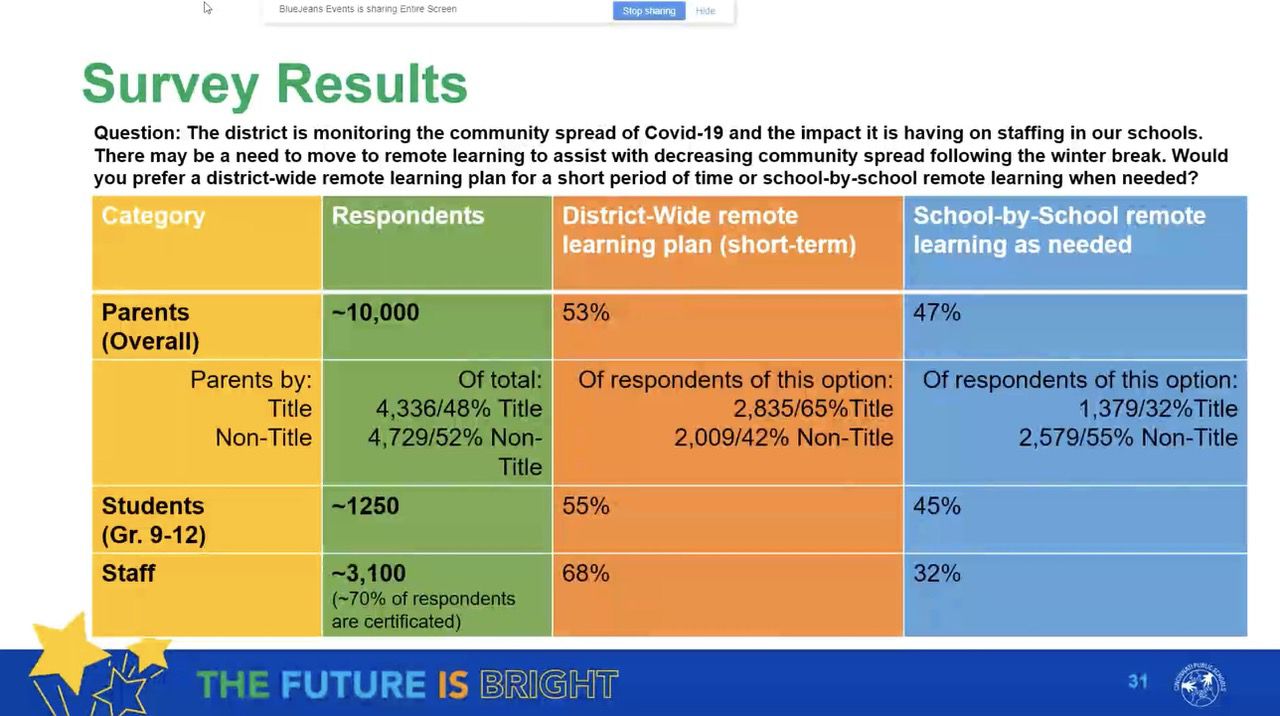 Results of a survey CPS sent to students, staff and parents/guardians about the idea of going back to remote learning.

District officials said they start to run into coverage issues when staffing levels at a school hit 85%. In their presentation, they said 48 of their 65 schools would have hit that number and gone remote if that was the only measure they took into consideration.

There's a statewide shortage of available substitute teachers. It's a part due to the amount of need but also some subs are unwilling to go into classrooms right now given the state of the pandemic, Amat said. As a result., CPS teachers are currently helping to cover other classes during their planning periods or lunchtimes.

“So much of the information presented at the school board meeting last night depicted an in-school environment that had become strained due to teacher, staf, and student absences. I know remote learning is tough on a lot of families, but the school-by-school basis for closing created a logistical nightmare,” said Patty Lee, a parent of two high school students at the School of Creative and Performing Arts in downtown Cincinnati. Both she and her husband work full-time.

“There was this anxiety associated with needing to ask ‘do we have school tomorrow’ every, single day,” she added. “I know that my kids have had classes where they watched movies, struggled getting regular medications due to nurse shortages, and so on. I am glad that kids will get some stability in their learning environment over the next two weeks.”

Mike Moroski, who has been vocal about his support for going to a remote model for the last couple weeks, said “shuffling people around” and lowering requirements to be a substitute teacher will not help kids learn.

“It is making our schools places to warehouse kids. That ethos is concerning to me,” he said.

At the time, the CPS administration recommended going to a distance-learning format district wide from Jan. 6-18. Most school board members asked for information about the possibility of closing on an as-needed, school-by-school basis.

Over the past week, eight schools went online learning due to what CPS called “extreme staff shortages.” After school activities for these schools were closed during this time.

CPS isn't the only local school district to make the decision to go remote. The public school districts in Lockland, Mt. Healthy, New Richmond and Winton Woods have done so as well. The timelines for those districts vary.

The University of Cincinnati made the decision to go remote-only for at least the first two weeks of the current spring semester.