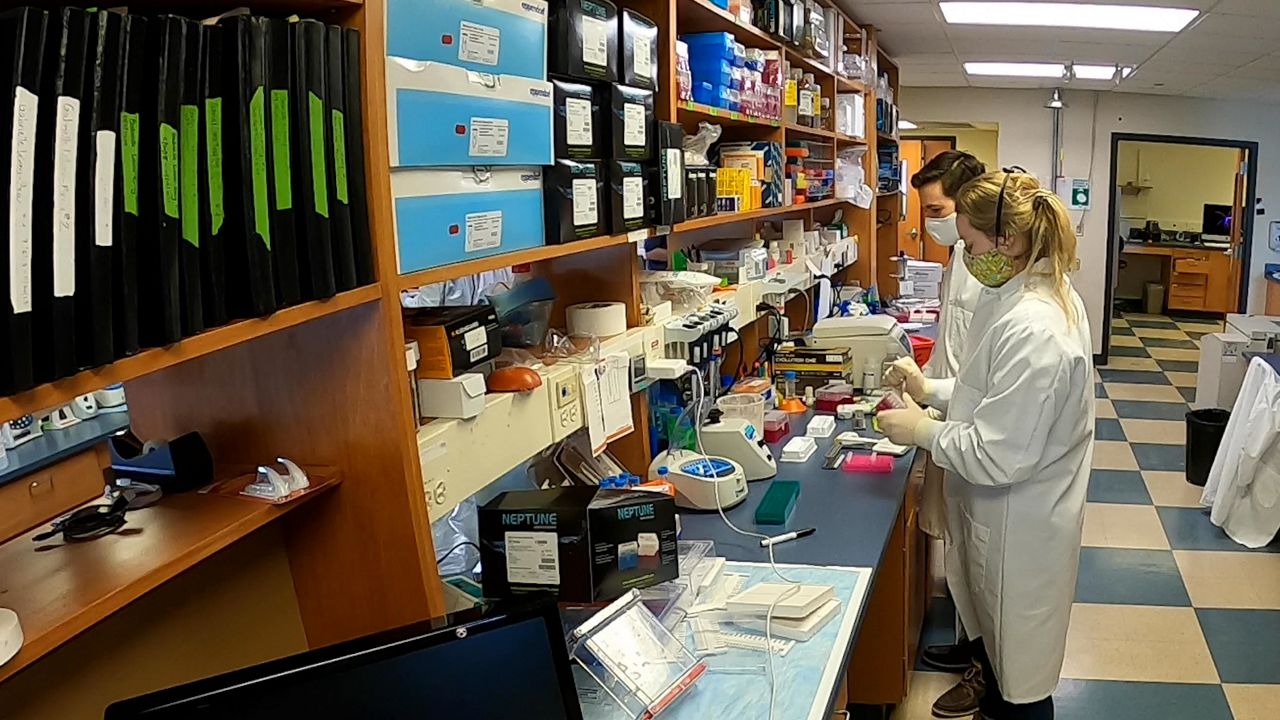 MADISON, Wis.— Since the beginning of the pandemic, researchers at UW-Madison's AIDS Vaccine Research Laboratory have been mapping the genetic makeup of positive coronavirus samples.

“Generating a genetic finger print essentially from those viruses to sort of be able to track what viruses are here, where they are coming from, and how they are moving through our community,” said Katarina Braun, a grad student researcher in the lab.

They look for variants of concern, like the ones from England or South Africa, and they track for other new variants as well.

“If we're doing the work and making sure that we're finding those samples early, we can isolate those individuals that are infected and make sure that these variants of concern are not spreading at a higher than we would like rate,” said Gage Moreno, also a grad student researcher in the lab.

They test hundreds of samples a week, primarily from Dane and Milwaukee Counties. Though the researches say even what they track is not enough and that's not to mention more samples are tested from these counties than almost any other in the state.

“When we're not sequencing viruses we just were completely in the dark about what viruses were circulating and there's so many parts of our country and state that just have no sequencing available,” Braun said. “So we just have no idea what's going on there.”

The state has three other labs tracking variants, Two Department of Health Services labs and one from Gunderson Health in the La Crosse Area. Top health officials in the state say that's enough.

“We are actively trying to scale this up, we are actively seeking more funding, more supplies, more staff to do this because it's going to inform how we understand transmission of novel variants in the future,” said Dr. Ryan Westergaard, DHS chief medical officer in a press briefing Tuesday.

“Variants represent a growing threat to the health and security of our nation, and right now the U.S. is lagging behind other countries in tracking new and emerging variants of this deadly virus,” Baldwin said in a press release.

Her office says right now the country is checking less than one percent of cases, Baldwin and other lawmakers say that should be at least 15 percent.

“Definitely, I think this needs to be adopted more widespread,” Moreno said.

Right now they say labs around the country are screening variants mainly independently of each other. Federal guidelines and funding could make the process more efficient.

“I think a top-down approach is really necessary and needed for these states that do not have any sequences right now,” Moreno said.

Ultimately they say what we are tracking is tiny compared to the full picture.

“We don't have a really good sense of where those variants are, where they are moving, how quickly they're growing because we're not doing enough sequencing to look,” Braun said.