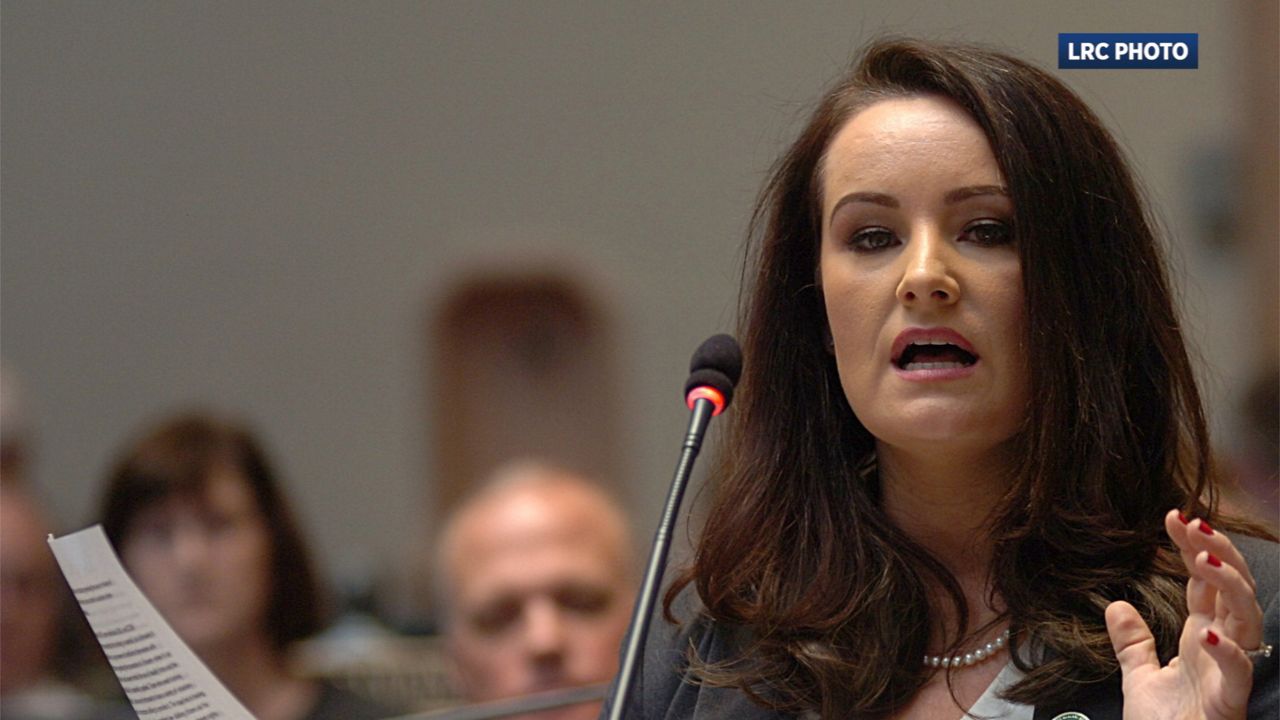 
Since 2019, Maddox has been advocating for less government in Frankfort.

“I think that my proven track record, with regard to defending our constitutional rights and freedoms, and the fact that I was the lone voice in the wilderness for so long in terms of standing up against Andy Beshear’s mandates and shutdowns, I feel like that sets me apart in this field,” she said.

In her first campaign advertisement, she criticized other Republican candidates for not stepping in early enough during the pandemic.

“Just admit that you’re actually a Democrat and go run in the primary in their party,” Maddox said in the ad.

When asked Thursday, she didn’t call out any specific candidates.

Maddox’s role in the protests and connection to some of the armed militia groups who organized them generated some controversy. In a statement, Kentucky Democratic Party chairman Colmon Elridge called her an extremist.

“I think that the Kentucky Democrat Party, and frankly a whole host of folks with a progressive agenda, are frightened by my candidacy because they understand that the vast majority of Kentuckians are God-fearing people who just want to live a prosperous and peaceful life, free from government interference," Maddox said in response.

In her nearly four years as a lawmaker, one of Maddox’s biggest political victories was sponsoring the bill that allowed concealed carry without a permit.

She said despite the conversation around gun safety after several mass shootings the last couple months, she wouldn’t pursue any gun restrictions.

“Let me be perfectly clear in stating that I am 100% opposed to any additional gun control,” she said. “Whether its a red flag law, and frankly, I have led the charge to abolish so-called ‘gun free zones’ in so much as law-abiding Kentuckians have the right to be able to defend themselves from the lawless, and I think that’s what we’re seeing across the country.”

She also co-sponsored Kentucky’s abortion trigger law that would ban the procedure if Roe v. Wade is overturned.

“I very much look forward to the moment in time when Roe v. Wade is overturned,” Maddox said. “And I’m going to continue to do everything that I can in the commonwealth of Kentucky to outlaw abortion.”

Maddox voted in favor of medical marijuana this session and said she would like to see Kentucky develop a pilot program.

“Anything that a physician can prescribe to ameliorate human suffering in terms of health conditions, particularly in end of life situations, I would support that,” she said.

Beyond that, Maddox said she would look at decriminalizing marijuana, but full legalization would not be the focus of her campaign.

Maddox also advocates for eliminating Kentucky’s state income tax, and voted for a bill that could eliminate it down the line if the state brings in enough revenue.

“Everything that I have done in the context of my service to this commonwealth has been through the lens of decreasing the role that government plays in our lives,” she said. “I’ve never voted for a tax increase or anything that would infringe upon our individual liberties or be a regulation on new businesses because I understand that Kentuckians will flourish best when they are free from the undue influence of government.”

Maddox said she is a strong supporter of former President Donald Trump, and claimed what happened on Jan. 6, 2021 was exaggerated.

“I feel as though Jan. 6 and the events that occurred that day were very much exaggerated in so much as law-breaking activities clearly did occur, but at the same time, I feel as though the majority of folks who were present were there to protest peacefully and make their voices heard,” she said. “Which is a right guaranteed by the constitution.”

When asked if she believes Jan. 6 could be a concern going into next year’s primary, she said she was more concerned about what the “radical left” was doing to undermine the country’s social structure.