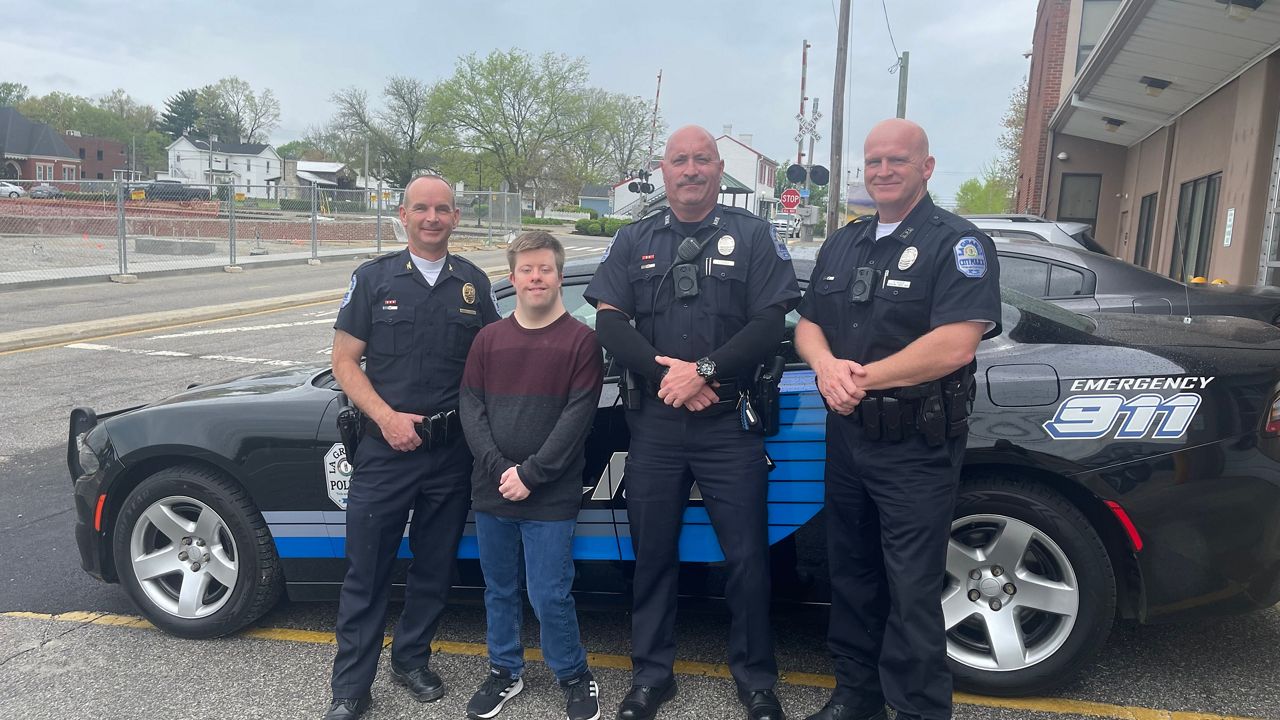 Jonathan Boiney, second from the left, poses with his colleagues at the La Grange Police Department. (Spectrum News 1/Amber Smith)

LA GRANGE, Ky. — Usually Mondays can be a drag, but officers at the La Grange Police Department say it’s their favorite day of the week. That’s because Jonathon Boiney works with them every Monday afternoon.


Boiney is one of around 50 people working part time in the community thanks to the Down Syndrome of Louisville’s Career Solutions program. The 26-year-old has been with the department since 2017, with a brief pause during the pandemic.

Boiney has his own office in the department. When he comes in, he looks at his task checklist, which he is quite particular about.

He likes to start with shredding because it can cause a mess, which he then cleans up. As he sweeps in his office, down the hallway and into the stairwell, Boiney explains he has some good friends here at the department.

“Marcus is always causing trouble. Hey, don’t call me out like that,” Boiney jokes as he passes officer Marcus Lane.

Lane actually met Boiney years ago when Lane was working as a coach at Boiney’s middle school.

“Jonathan would come in and shoot basketball. I challenged him to a game of horse, which he beat me,” Lane said. “He didn’t get a letter. He doesn’t miss from the free throw line.”

Boiney’s love for basketball shines through at work every time he goes to take out the trash. He likes to wind it up and give it a good toss. He calls it his “trick shot.”

“We actually have a camera here that watches the back door,” said Lane. “We will actually see him when he winds it up a couple of times and gives it a toss. I actually get made fun of because I don’t do the trick shot when I take the trash out.”

From taking out the trash, to sweeping and everything in between, officers say Boiney has one of the best work ethics on the force. It’s something Chief Greg Collett noticed when he joined the department several years ago.

“He has a wonderful work ethic, and enjoys interacting and doesn’t hesitate to let us know when he is running low on supplies. He just has a great attitude,” said Chief Collett.

That great attitude can be infectious.

“If you’re working a stressful case or something, it never fails that he will ram you with the vacuum cleaner to make you laugh and break you out of that moment,” said Lane.

For Boiney, it’s about so much more than just working to earn a paycheck.

“My favorite part is everything,” said Boiney. “They care about me.”

This is a place of friendship for him. The feeling is clearly mutual.

“He’s one of my favorite people in the office and one of the hardest workers. Hopefully, he stays around for many more years,” said Lane.

You can find out more about the Down Syndrome of Louisville’s Career Solutions program on the organization’s website.