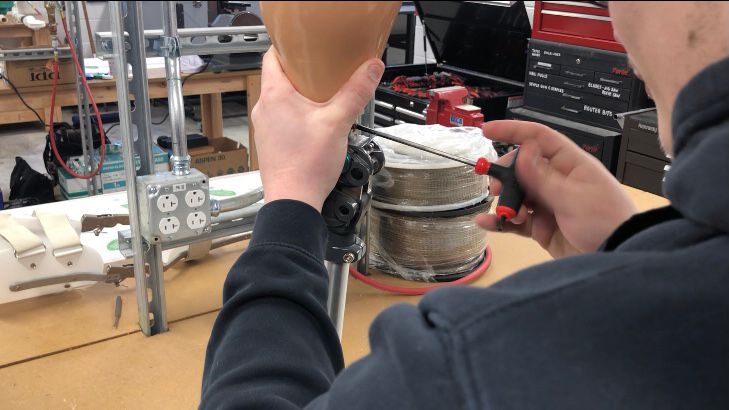 BCTC provides opportunities for students to learn about prosthetics

LEXINGTON, Ky. — Bluegrass Community Technical College is now providing a program that is only one of six in the United States.

The Orthotic Prosthetic Technology Program has grown over the years, and now students in Kentucky have the opportunity to learn.

Devin Lewis is in his second semester of the Orthotic Prosthetic Technology Program at BCTC.

He’s working to give back to an industry that is close to his heart.

“We’ve got the Lexington VA clinic right here. He’s been a frequent user of the VA clinic, so I’ve always had a kind of shaped mind of working with veterans and stuff,” Lewis said.

Lewis’s dad is a veteran, and says it’s a skill set that reminds him of his dad daily.

“I learned some useful tools and stuff. It’s like helping my dad out with cars and stuff, but I’ve never used tools as much as I have now,” Lewis said.

He learns under the instruction of Michael Madden. Madden says he started in this industry when he was 5 years old, as a patient.

“I spent my sixth birthday recovering from a hip disarticulation amputation. And that was kind of my introduction into prosthetics,” Madden said.

Now an instructor for the past 12 years, Madden says he uses his experience as a way to give back to those who helped him through his prosthetic journey.

He says it’s a field that allows creativity by engineering each piece to each unique individual.

“I can have six people with the same pathology or the same disease or same illness. I might have six different approaches for each individual person. So it’s very individualized as far as treatment protocols,” Madden said.

And Madden says it’s a skill set the industry is in need of.

“Fortunately we’re not becoming healthier as a population, which means as the populations get older as diabetes and other diseases are becoming more prevalent, the demand is becoming much, much greater,” Madden said.

Lewis says he never expected to study this, but knows his father is proud of his efforts in choosing a rewarding career.

“Yeah, well, I like to think he’s proud of me, he’s always telling me that he’s really glad that I’ve chosen this field being able to help people especially if I do choose to go to the veterans,” Lewis said.

Currently, there are around seven students in the program total and the community college is working on a partnership with local universities to provide housing for students who may need to commute.