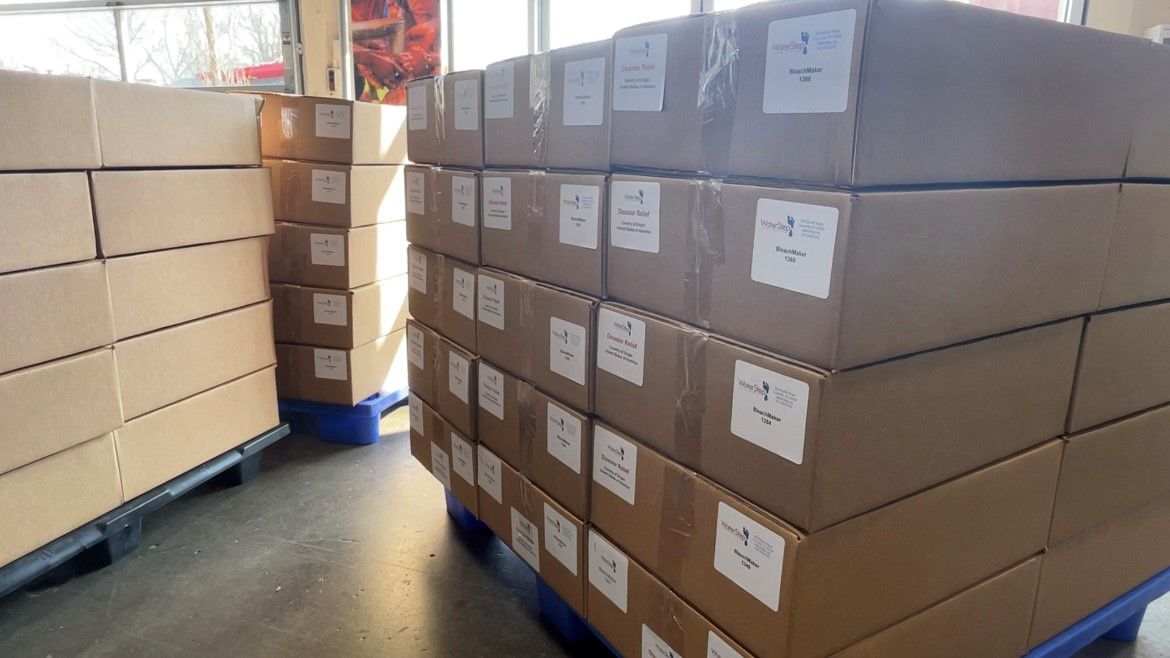 WaterStep sent 100 of its BleachMaker kits to a group in Germany that will deliver them to Ukrainian hospitals. (Spectrum News 1/Jacqulyn Powell)


Since 1995, WaterStep has provided tools that help purify water and create bleach, helping millions of people in over 60 countries without access to clean water.

On Thursday, the nonprofit packed up 100 of its BleachMakers to send to Ukraine.

WaterStep volunteers designed the tool several years ago to help in the fight against Ebola in Africa. BleachMakers are portable devices that use water and salt along with a power source to create bleach—a disinfectant safe for cleaning, cooking and bathing.

The tool can produce a little more than a gallon of bleach an hour. Small amounts of the bleach can also purify unclean water.

WaterStep builds and tests all of its BleachMakers in-house. They were most recently used to help in the aftermath of December’s tornadoes in western Kentucky.

WaterStep is sending the BleachMakers off to Humanitare Hilfe Trier E.V., an organization in Germany that’s delivering medical supplies to hospitals in Ukraine. They’ll use the BleachMakers as disinfectant in hospitals that are treating war victims.

“They’re filling about three trucks a day, driving 15 hours to the Ukrainian border and then disseminating the medical supplies to critical medical area needs throughout the country,” explained WaterStep Founder and CEO Mark Hogg.

Hogg’s nonprofit linked up with the group in Germany because one of his volunteers was a childhood friend of the woman leading the efforts out of Trier, a town in western Germany. Hogg said that town, the oldest in all of Germany, has a large population of Ukrainian residents.

“Those trucks are being driven by young men and women who are Ukrainian. They can get into the country easily. They can translate very well whatever needs to be translated, but they don’t come back to Germany,” Hogg added. “They stay. And they’re staying there to help. To fight for their freedom.”

The nonprofit hopes to send an additional 400 BleachMakers to aid the crisis in Ukraine. Hogg and his team are asking the community to help fund those efforts through donations.

According to the nonprofit, its tools and programs have brought safe water to over five-million people in over 55 countries.