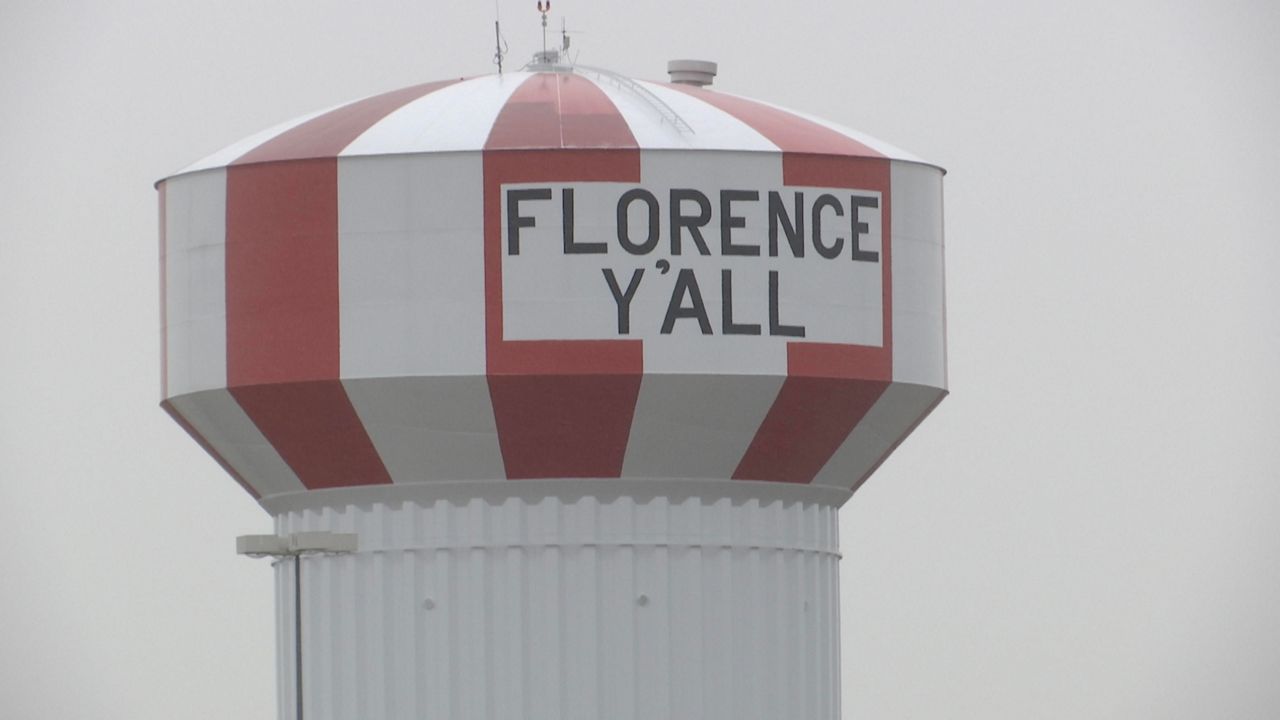 Florence Y'all: How the iconic water tower got its name

FLORENCE, Ky. — Of all the landmarks in Northern Kentucky, there is one particularly iconic structure synonymous with its city that lets people know exactly where they are when they see it.

Many people know the story behind the unique “Florence Y’all” water tower, but a person with firsthand knowledge of how it came to be shed light on how the city turned a potential big blow to its budget into Florence’s favorite phrase.

The phrase adorns memorabilia all over her office, and she can even see the water tower from her window.

Anyone who’s ever driven through Florence has likely seen it, too.

Whalen wouldn’t have any other way.

“People know where we are. You can be anywhere along the I-75 loop. You can be out of the country in some cases, and people will talk about, well where are you from? You start off telling them, ‘well we’re about 10 miles south of Cincinnati, Ohio, in Northern Kentucky. We’re in Florence.’ ‘Oh, Florence Y’all. I’ve seen your water tower.’ And so it just became who we were, and what we were known for,” Whalen said.

Cute as the signature phrase is, it is also curious, and not something one typically sees on other city’s water towers.

Whalen’s father Hop Ewing is to thank. He was the mayor in the early 1970s when the Florence Mall was under construction. Developers offered a corner of property on the west side of the expressway to the city to build a million gallon water tank. 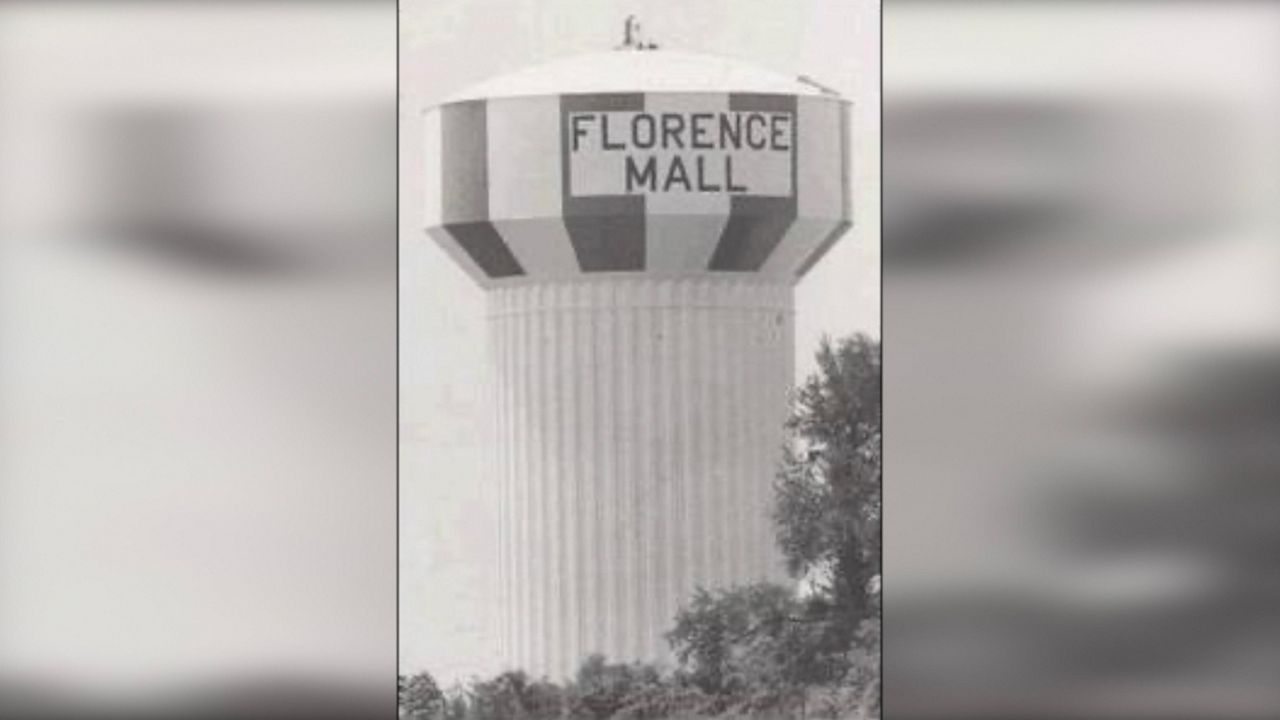 When the tower first went up, it read “Florence Mall” (Diane Whalen)

“With a stipulation that when it was done it would say Florence mall,” Whalen said. “Not too long after that happened, they received notification at the city that they were in violation of several different things, and that they had to change it.”

The highway beautification act prohibited billboards along interstate highways. It went up before the mall, advertising something that wasn’t there. Repainting the whole thing would be expensive, but with a few subtle changes, Ewing envisioned a practical solution.

“And they would simply take my father’s scratching on a napkin where he had eliminated the legs of the M, and dropped an apostrophe in there, and create Florence Y’all from Florence Mall, and they came out and did just that,” Whalen said. 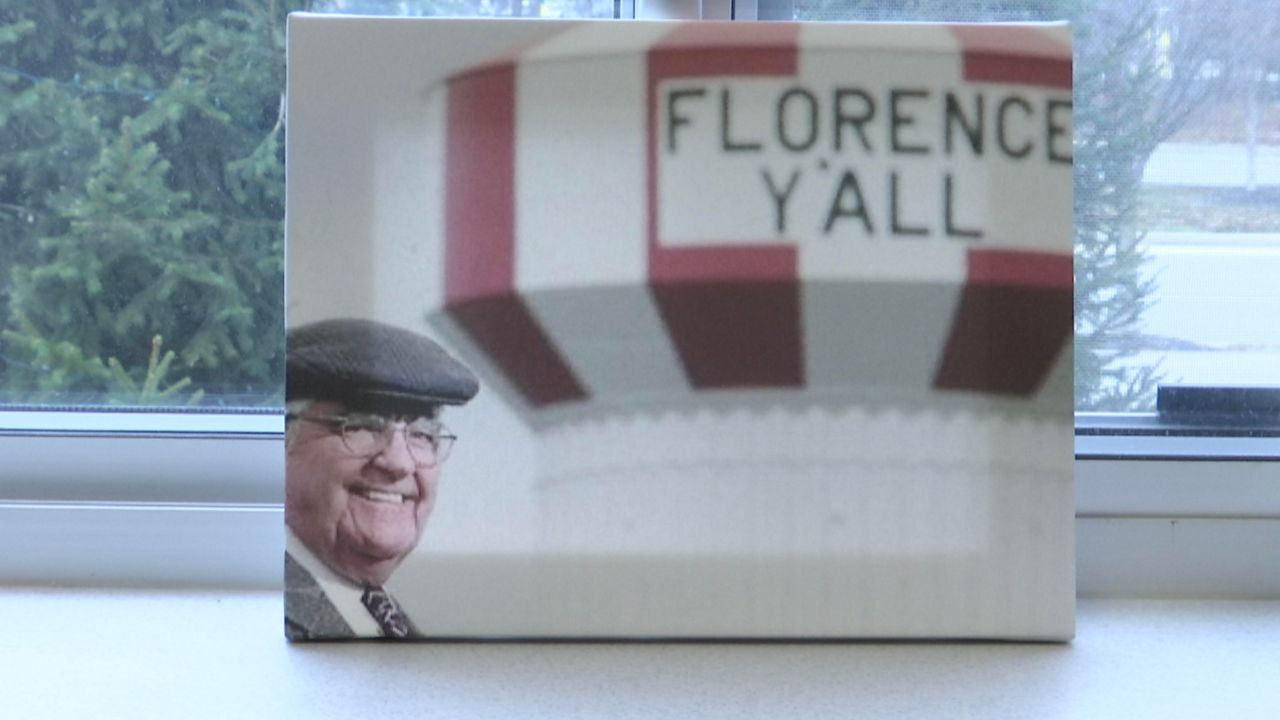 The plan was to go back to Florence Mall once the mall was built, but by that time the owners had deeded the land, which would entail more legal issues. And people were actually starting to like it, Whalen said.

“And by that time, the ownership group had deeded that land to the city of Florence for the water tower itself, where the off premises advertising comes in, and they were not allowed to advertise on something that they didn’t own,” Whalen said.

So, it’s been Florence Y’all for nearly 50 years, becoming synonymous with the city. Even the local baseball team became the Florence Y’alls in 2019.

“We get all kinds of comments about, ‘What’s going on? What are you putting on there?’ There are haters and there are lovers, but I believe the lovers outweigh the haters by a lot,” Whalen said.

When Whalen first started as mayor, she sat down with the manager of the mall at the time.

“And he said, what can we do about that hokey saying on the tower? It makes people think we’re country,” she said. “I told him as long as my father lived and breathed that tower would say Florence Y’all.”

“He came to the funeral visitation, and I leaned over and whispered in his ear we’re still not going to change it,” Whalen said, laughing.

Whalen said the tower was the exclamation point on her dad’s career as mayor. When he retired, he was the city’s longest serving mayor at 20 years, from 1961 to 1981. Whalen said she never thought about following her dad as mayor as a kid. Yet, she just began her 24th year.