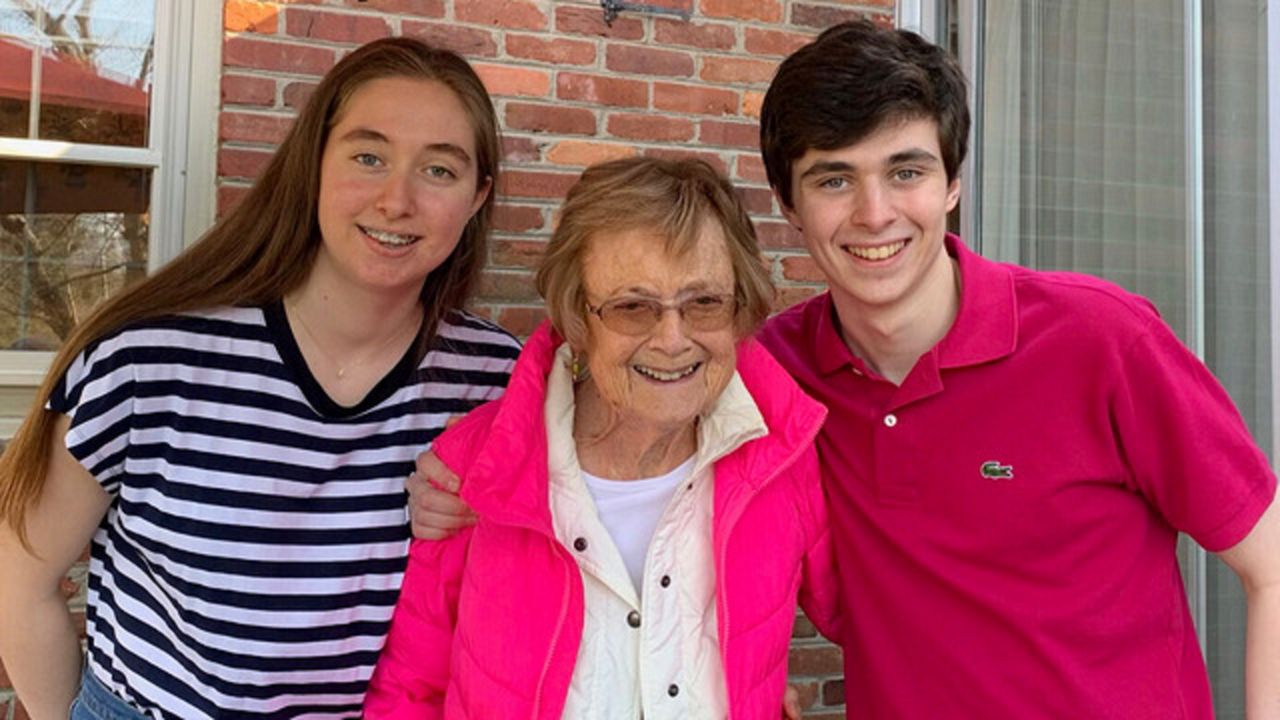 Twins Arianna (left) and Lorenzo (right) Martinelli, are on a mission to create connections between high schoolers and senior citizens via a mobile app they are developing. The concept was inspired by their late-90-year-old grandmother (middle), Mary Margaret Plaschke. (The Martinelli Family)

LOUISVILLE, Ky. — Twins Arianna and Lorenzo Martinelli are on a mission to create connections between high schoolers and senior citizens with a mobile app the 17-year-olds are developing called Tandem.

Currently, the app is in its third pilot program. The Martinelli twins expect to have the first prototype of the Tandem app completed by the end of April.

Over one in three Americans face “serious loneliness” during the pandemic, which seems to have increased since the pandemic started, according to preliminary data released in Feb. last year by a Harvard University project called Making Caring Common. However, an app currently in development by the Martinelli siblings could help with "serious loneliness."

The concept of the Tandem app is currently being looked at by some Louisville-based high school students and elderly adults through a third pilot program.

The app is currently in development so it’s not available to download yet. However, Spectrum News 1 spoke with two users participating in the Tandem app pilot program to give you an idea of what it’s like.

Once a week, Keiko Ohta and Sister Paula Kleine-Kracht catch up for 30 minutes over the phone.

“We have mutual interests, like piano, music and all of that. Yet, we hold some like very different ideas as well and that doesn’t hinder our conversation at all.”

Besides an almost six-decade age difference, 75-year-old Kleine-Kracht has been a Roman Catholic nun since she was 18 years old. While Ohta goes to the same all-girls Catholic high school Kleine-Kracht graduated from, Sacred Heart Academy in Louisville, the 16-year-old isn't Catholic.

“I think it allows me to have a better understanding of a larger group of people," Ohta told Spectrum News 1.

Their weekly catch-ups are made possible by the Tandem app pilot program, which aims to connect high schoolers and seniors. This is something Kleine-Kracht finds especially helpful since she’s in assisted living. She also said it is more difficult to meet new people as she ages.

“I’m also very aware, too, that I have very few people of color who are friends, and that’s just circumstances, too," Kleine-Kracht. She added, "And so meeting with Keiko … it stretches me. It makes me alert to someone else and like I said, I consider that a blessing.”

“I never questioned or had a position of sitting and wondering what is my sexuality, OK, and I realize now that, that can be a very, not only a very serious pondering for a person, but it may be that it’s pondered far more often than I thought," Kleine-Kracht told Spectrum News 1.

“To have this conversation with someone who is part of the Roman Catholic religious community, and to have it be still a safe conversation; and not one where the idea is immediately, sort of like, villainized, I guess was a really eye-opening experience," Ohta said. "Because in my experience with it that’s not always the case.”

The Martinellis are the co-founders of the Tandem app.

"Yeah, so it really started with our 90-year-old grandmother, Mary Plaschke, and with COVID, and everybody feeling really lonely. We found a lot of comfort calling her each week and having these conversations, hearing about our lives, and hearing about her stories," Arianna said. "And we wanted to create that opportunity for other high schoolers and seniors to meet.”

Their grandmother, who passed away on Oct. 30, was Tandem pilot program's first senior to use it. Now, Tandem is in its third pilot phase.

So far, only students who go to the twin’s Louisville-based high schools, Lorenzo at Saint Xavier and Arianna at Sacred Heart Academy, have participated. The twins also developed the app with a motivational factor for students to try Tandem's concept built-in, required volunteer service hours.

“But what we've really realized is that though these requirements may be the catalyst for participation, that they’ve just really (have) grown to enjoy it, and they come back even when they fulfill their service requirements because of how meaningful the relationship is to them," Lorenzo said.

Anna Faul, who is the executive director of the Optimal Aging Clinic at University of Louisville Trager Institute, which focuses on how people can live rich and meaningful lives despite the challenges of aging, said there is a lot of ageism in the United States.

“In South Africa, if you think about the African context of wisdom … the oldest person in the tribal community is the one with the wisdom … and that’s the one who gave you an understanding of how to live your life as a young person. We need to bring that back," she said.

Faul said intergenerational connections are a win-win situation because it keeps elders engaged and it also helps younger generations, too.

“We always know that if we have those relationships at a young age, we are going to become much more sensitive as we age; to be aware of the people around us who are aging ahead of us; and how we can help them find meaning because that will give us meaning," Faul said. "It’s a wonderful circular effect.”

Ohta said she doesn't have the types of conversations she has with Kleine-Kracht with other elders she knows such as her grandparents.

“I usually surround myself with like-minded people to me; who do similar activities and spend their free time the same way, but to have a sort of a blast of something new in my life has allowed me to understand how other people think," Ohta said.

Regarding Tandem's concept, Kleine-Kracht said, "It’s something that adds a dimension that I don’t have anywhere else, with anybody else right now, even though I have a very large family.”

Initial use of the app will only be available for current pilot program users. However, Tandem is looking for more high school and elderly participants in its third pilot phase program. If you're interested in participating, you can sign-up here.

Editor's Note:  In a previous version of this story both the names Martinelli and Lorenzo were misspelled.  The errors have been corrected and we apologize for the errors.