LOUISVILLE, Ky. — More than a dozen Louisvillians, including one candidate to be the city’s next mayor, spoke out against the approval of a new contract for Louisville Metro Police Department's (LMPD) officers and sergeants at a special meeting of the council’s labor committee Monday.

“Louisville deserves community protection that is thorough, accountable, transparent, unbiased,” said Shameeka Parrish Wright, an activist and candidate for mayor. “While I agree officers and others in public safety need to be compensated well, we, who depend on them, need the enforcement arm of our city to not be undertrained, corrupt, or racist.” 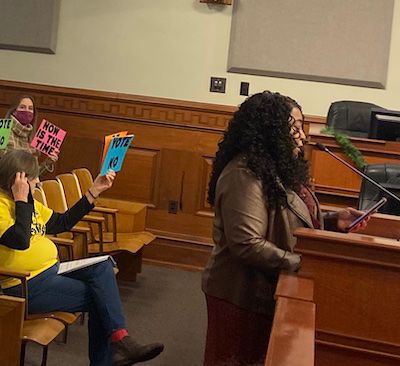 Mayoral candidate Shameeka Parrish Wright was among those who spoke against the contract. (Spectrum News KY/Adam K. Raymond)

Last week, rank-and-file officers and sergeants approved the new contract, just two months after they rejected a similar proposal. The new deal included one notable difference — a bigger pay raise. Both contracts hike salaries 9% in fiscal year 2022, but the new version doubles raises in fiscal year 2023 to 6%. If Metro Council approves the contract, the starting salary for an officer will increase from $45,489 to $52,561 in July 2022.

There were roughly 20 people present at Monday’s special meeting of the Labor and Economic Development Committee, which was called ahead of Tuesday’s regularly scheduled meeting. The committee is expected to vote on the contract Tuesday. If it passes, the full council will vote on approval next week.

Many speakers, some of whom held signs that said “Send it Back” and “Vote No,” took issue with the proposed raise, saying that LMPD officers should not be rewarded after incidents such as the Explorer sex abuse scandal and Breonna Taylor’s killing.

“It is reprehensible to give the police department that killed Breonna Taylor a 15% raise in exchange for absolutely nothing that will prevent officer-involved shootings and the terrorization of Black, Brown, and economically exploited communities,” Lindsey Wallace said.

Speakers criticized what they called a lack of accountability measures in the new contract, which would impose a handful of reforms that they deem insufficient. Among the reforms in the contract is a new policy requiring officers who are involved in “critical incidents” to undergo drug and alcohol testing, and changes to the way disciplinary records are maintained.

"We cannot give increases in pay without accountability,” said Keturah Herron, a policy strategist with the ACLU of Kentucky. Last year, Herron helped shepherd Breonna’s Law, which banned no-knock warrants, through the Metro Council. “What I’m asking for you all to do today is to make sure that there’s deeper accountability, and if that’s not going to happen, there is no sense in increasing pay,” she said.

Other speakers raised issues with the manner in which the contract was negotiated. Per rules set at the start of the negotiations, only Mayor Greg Fischer's office and the River City FOP were allowed to be present when the contract was worked out. For months, activists have asked for public input in the process but were never allowed to participate.

One speaker Monday offered words in support of the contract. Joining over Zoom, James Westfall said too many other speakers were focused on racial issues.

“I think the community supports LMPD and most seem to not understand that there’s a very thin line between civilization and savagery,” he said. “It’s the police department that policies that line.”