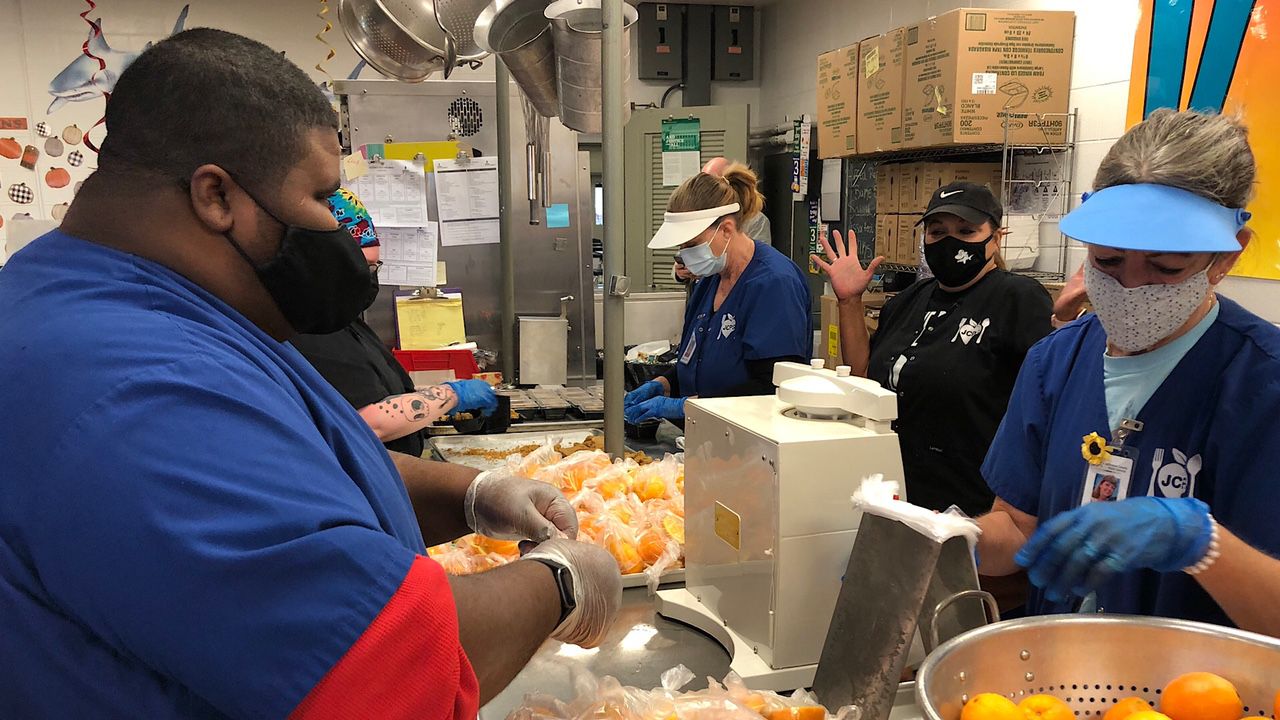 The food services team at Shacklette Elementary School in Louisville prepare in the cafeteria's kitchen to serve hundreds of students for lunch. (Spectrum News 1/Eileen Street)

How school lunchrooms are adjusting to supply chain issues in Kentucky

LOUISVILLE, Ky. — Jefferson County Public Schools (JCPS) is feeling the effects of the global supply-chain issues with its meal program.

Dan Ellnor, assistant director of JCPS’ school and nutrition services, which provides warehousing and food-production support to all JCPS schools, told Spectrum News 1 that right now the district is fine, but its supply-chain for cafeterias is tenuous.


Trina Gilbert and her team of five serve over 600 kids daily for breakfast and lunch at Shacklette Elementary School in Louisville. As the nutrition services coordinator at the school, Gilbert has a lot to juggle on a regular basis.

Now, there’s a lot more on her and her team's plate because of current supply-chain issues.

Instead, the team is adapting and using what they do have, like paper bags instead of trays to hold breakfast items and plastic bowls to hold lunch items.

JCPS has over 147 kitchens in the district that serve a little over 90,000 meals a day with breakfast and lunch, so the supply-chain issues happening globally also hits locally.

“The main message is we have plenty of food. It just may look a little differently at each school, and it may not be what was on the menu. That’s the main way it’s affecting us,” said Ellnor.

Ellnor said JCPS bids for its meal program a year out, but that’s out the window right now.

“We’ve seen supply shortages. We’ve seen cancellations. We’ve seen price increases and substitutions, and then, also, we’ve seen at least a couple of companies that say, ‘We are out. We are not bidding school bids, anymore,’ Ellnor explained. “Which is all normal. It’s just not all at once and not across all the supply chains. That’s what’s abnormal to this. It’s every different product line in some shape or fashion.”

Gilbert said explaining what’s going on to students goes a long way, but it takes a team beyond JCPS’ food service employees to make this work.

“This is a world-wide thing that is happening right now, and we just need everybody to understand,” Gilbert said.

She said patience by parents and students in also key.

Looking ahead, Ellnor said that suppliers are telling him the supply-chain will affect JCPS for about 20 to 24 months, in some kind of fashion. His main concern is what prices will look like next school year.

“We are communicating through all of our channels, to the state and the federal government, to make sure that they understand clearly what the day-to-day operations [are that] we are seeing,” Ellnor explained. “Twenty percent, 15%, 8% price increases, we communicate that up the chain to the USDA so the people who are making policy understand what the boots on the ground are seeing.”

Ellnor added that right now his department is staying afloat and within budget through a USDA program called Seamless Summer Option, which provides more federal dollars so all kids can eat for free during the regular school year. However, Ellnor said that program is tentatively scheduled to on June 30, 2022, which makes budgeting meals for the next school year difficult.