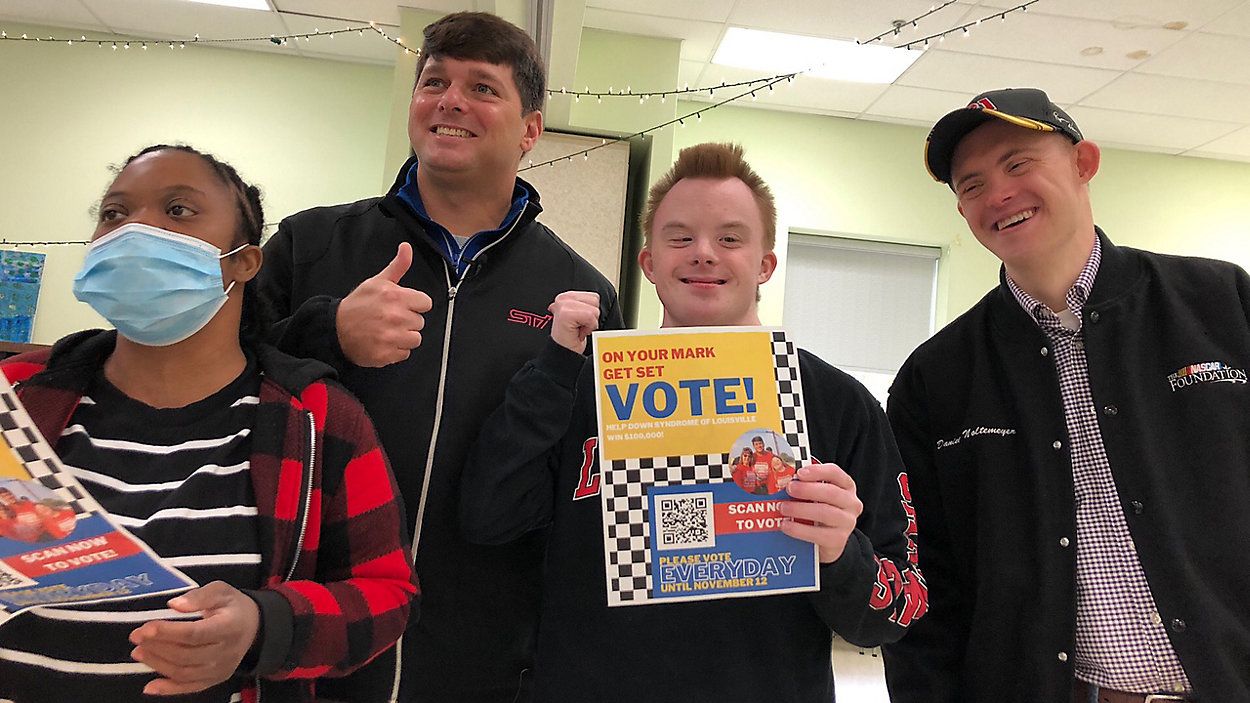 Jeff Harmon (with thumbs up) and Daniel Noltemeyer (far right) pose for a social media photo with two Down Syndrome of Louisville members in hopes the social media post will encourage people to vote for Harmon for The NASCAR Foundation's annual humanitarian award. (Spectrum News 1 KY/Eileen Street)

Down Syndrome of Louisville wants your vote: Nonprofit could win $100,000 via The NASCAR Foundation

LOUISVILLE, Ky.  — Down syndrome of Louisville (DSL) could win $100,000 by mid-November thanks to one of its volunteers, Jeff Harmon.

The Louisville husband and dad, who is also a local race car driver, is one of three nominees in the U.S. in the running for The NASCAR Foundation’s 11th annual Betty Jane France Humanitarian Award. The winner is solely determined by who gets the most votes.

Carly Riggs, executive director of DSL, nominated Harmon for the award because he has volunteered countless hours over the past 18 years at DSL.

“So one of the main stipulations of this award is that you have to be a NASCAR fan, and Jeff is a local race car driver,” Riggs told Spectrum News 1. So she put two-and-two together and asked if he was in fact a fan, and the rest is history.

“He’s the perfect candidate because he not only volunteers for us, but he’s also just a philanthropist in the community all of the time anyway,” Riggs explained.

Harmon helps with fundraising, mentoring members and their families, and volunteering at events.

“I’ll help anytime they need a dad around. I like to talk to other dads of new parents,” Harmon said.

Harmon knows firsthand what it’s like to be a new parent to a child with Down syndrome, since his almost 19-year-old son, Justin Harmon, has been a part of DSL since birth.

“It gave him somewhere to go, where he wasn’t looked at different at an early age, and it still does that, where you have the same peers. Everybody is on the same level as you, and it just gives you a special place where you can be yourself,” Harmon said.

Established in 1977, DSL’s mission is to “support, educate and advocate for individuals with Down syndrome” so they can reach their full potential. The nonprofit provides resources for the person with the genetic disorder and their families, from prenatal until end of life, free of charge.

“Like in our case, we did not know that Justin, when he was born, was going to have Down syndrome. So while we were still at the hospital, somebody from Down syndrome of Louisville visited us and tried to let us know what to expect and kind of share their story,” Harmon said.

DSL boasts over 50 programs, such as early childhood education and job placement, for free.

Daniel Noltemeyer has been a DSL member since elementary school. The 39-year-old still goes to tutoring once a week at DSL to keep his skills fresh. He also volunteers for DSL, such as giving cooking lessons virtually. Noltemeyer told Spectrum News that DSL is a big part of his life.

“Just to interact with all of my friends, and also including my tutor, Pam, because it makes my day go faster,” Noltemeyer said.

Since Harmon was selected as one of four nominees for the award, DSL is guaranteed $25,000. Riggs told Spectrum News 1 that money will go toward installing a shade structure for the nonprofits playgrounds.

If Harmon is announced the winner on Tues., Nov. 16, then DSL will also get $100,000. Riggs said that money will go toward expanding DSL in Kentucky with satellite locations.

“The special needs community is a lot like NASCAR. NASCAR is a family organization, and while some drivers might be rivals on the track and off the track, or anything happens you know, it’s one big family, and that’s what we do here at DSL. We are one big family, one big community,” Harmon explained.

A big family and community that is rallying behind one of their own to make Harmon the front-runner.