After a 150-year absence, elk were reintroduced to Kentucky in 1997. Now, Kentucky boasts the largest herd east of the Mississippi River. Abandoned coal mine sites have proven to be an ideal habitat for elk, and their presence could have a major economic impact on coal communities. (Kentucky Department of Fish & Wildlife)

Elk could be saving grace in coal country

LEXINGTON, Ky. — "The History of Elk in Kentucky" report shows there were no elk in the commonwealth for several decades. After reintroducing the animals began about 25 years ago, Kentucky is now home to the largest elk herd east of the Mississippi River. That fact could have a significant economic effect on coal communities.


It turns out that reclaimed coal mine sites, which are plentiful in eastern Kentucky, offer an ideal habitat for elk. David Ledford owns a 12,000-acre plot of reclaimed coal mine land in Bell County, which has a 30% poverty rate and an average household income of $26,000, making it one of the poorest counties in the country.

According to an article in The New York Times, Ledford and his business partner, Frank Allen, are currently developing that land into a nonprofit nature reserve called Boone's Ridge that will offer a museum and bird- and animal-watching opportunities. Boone's Ridge is set to open in the summer of 2023 and is expected to draw nearly 1 million visitors a year and pump $200 million annually into the regional economy by selling itself as a suitable place to view elk. According to its website, the development expects to create 3,300 new jobs in the region. 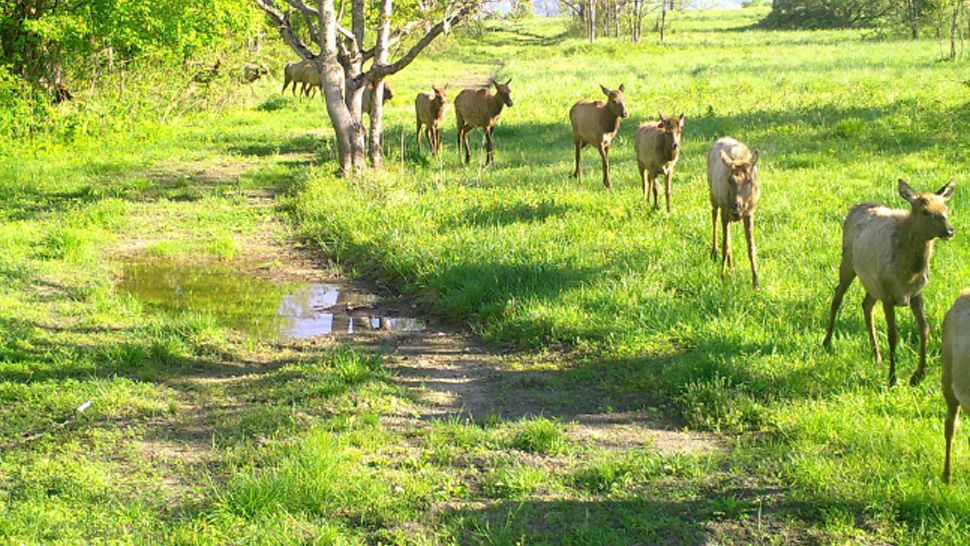 Elk roam in a single-file line on a section of a 12,000-acre reclaimed coal mine site in Bell County. The land is being developed into a nonprofit nature reserve called Boone's Ridge set to open in June of 2023. (Boone's Ridge)

The pre-Civil War abundance of elk in Kentucky is noted by the names of towns, like Elkhorn City in Pike County, and bodies of water,6 like Elkhorn Creek in central Kentucky, but no elk remained in the commonwealth by the late 1800s. The Kentucky Department of Fish & Wildlife was established in 1944 and soon began reintroducing animals, such as the Whitetail Deer, of which there were fewer than 1,000 after the Great Depression. The Whitetail deer population now exceeds 1 million and generates around $550 million annually from hunting licenses, tourism, rifles and other hunting paraphernalia.

"When you look at fish and wildlife agencies, they were very involved in species restoration," said Gabe Jenkins, former Kentucky Elk Program coordinator in an RMEF-produced video. "And as a lot of those things were starting to wrap up with deer, turkeys and otters, we were looking at the next step, and for us, it was elk. We had the habitat and the desires. There were elk in Michigan and Wisconsin, but there weren't any in the southern part of the U.S. This would be a big endeavor, and things that we were looking for were a low-road network, lots of open areas that elk can utilize and feed on, low populations of people, just a good, open expanse. Eastern Kentucky made the most sense to us."

Most of Kentucky's threatened game was restored over the years. In 1997, an association of hunters called the Rocky Mountain Elk Foundation (RMEF) offered to pay for a multimillion-dollar six-year plan to relocate more than 1,500 elk from the western states to Kentucky.

"We start working together trying to find a means and a mechanism to pull off and help restoration in the east by making those contacts in the west," Jenkins said. "The financial aspect of a large movement of animals all across the country needed a partner to help us work through that, and that's where RMEF came in and where our relationship started."

According to the report, Elk had been abundant in western Kentucky's grasslands during presettlement times, but most of that land has since been developed. The average elk eats roughly 40 pounds of vegetation each day and farm owners were concerned about the animals destroying their crops, so the thousands of sparsely populated and undeveloped abandoned coal mine sites in eastern Kentucky offered the perfect habitat. Less than 25 years after the first elk stepped foot in Kentucky since the 1840s, there are more than 15,000 of the half-ton animals within a 16-county cluster in coal country, according to the 2019-20 annual elk report.

"Eastern Kentucky is where our mining industry is, and through that practice, it creates early successional habitat and grasslands, which is perfect for elk," Jenkins said. "That was really the driver that made us think this can work, and there's plenty of habitats there. We wanted to try to do everything we could to set ourselves up for success. At the time, there were 3.7 million acres in our proposed area. The opportunities were endless."

A study by the University of Kentucky reports a tangible economic impact is already being realized because of the elk. The commonwealth issues a limited number of tags for elk hunting each year, and a few sightseeing tours and guided-hunt businesses have begun that add around $5 million to local economies.

"In 2001, we established our first elk hunt, and keep in mind we released animals in December of 1997 through 2002," Jenkins said. "So we were still releasing animals while we actually implemented a hunt. We wanted to set the stage to say hunters are going to benefit from this opportunity. Hunters are paying for this, so they should partake as soon as we feel comfortable. Applications even in 2001 were $10, and we've maintained that through time. Now, around 45,000 people apply for an opportunity to get one of those tags, and those folks come from all over the United States."

When it comes to elk, Kentucky is paying it forward as well. West Virginia received 20 elk from Kentucky in 2016 to place in its southern coalfields. According to an article by Ashley Stimpson in Belt Magazine, the herd had grown to more than 80 by early 2020.

"We're really writing the book on how to manage elk in the east, and we look to our western partners for their expertise and guidance, but it's not an apples-to-apples comparison, but very much as apples and oranges," Jenkins said. "We're approaching our 25th anniversary of elk in Kentucky. I don't think anybody could have fathomed what it turned into."