LEXINGTON, Ky. — Most veterans of the United States military likely have a list of personal accomplishments. Still, one event allows them to be recognized for their creativity long after their service to our country has commenced.


The Department of Veterans Affairs (VA) Arts Competition provides veterans an opportunity to submit artwork in competitions at the local and national levels.

“This is our second year participating,” said Candace Crawford, visual information specialist for the Lexington VA Health Care System and coordinator of the exhibit. “We are excited to have these veteran artists participate and represent Lexington in the competition.”

VA medical facilities use the creative arts as one form of rehabilitative treatment to help veterans recover from and cope with physical and emotional disabilities. Across the country each year, veterans enrolled at VA health care facilities compete in a local creative arts competition that includes categories in the visual arts division ranging from oil painting to leatherwork to paint-by-number kits. In addition, there are categories in writing and the performing arts of dance, drama and music.

The artwork of several Lexington veterans has been on display since mid-September in the Kentucky Room on the third floor of the Lexington Public Library on East Main Street. United States Navy veteran Dorothy Cline, 60, of Georgetown, has created art since she was a young girl growing up in Rosewell, Minnesota.

“When I was very young, I turned in an art assignment in school and was accused of letting my parents do it,” Cline said. “They didn’t believe someone my age could have done it so well. But, it was mine.” 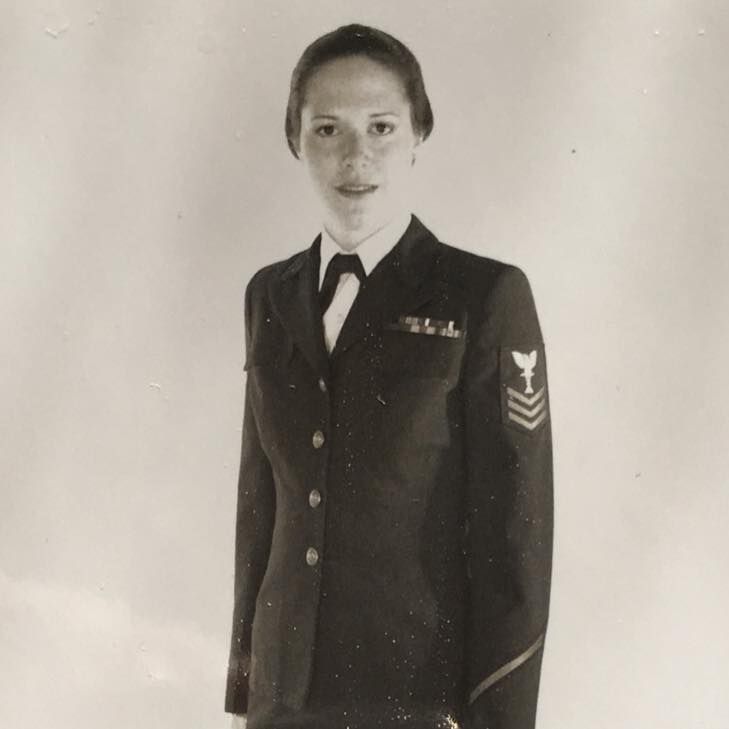 Dorothy Cline served in the United States Navy from 1979 to 1987 as a photographer's mate. (Dorothy Cline)

Cline enlisted in the Navy in 1979 and served for eight years as a photographer’s mate, taking pictures and recording videos of military operations, exercises and other Navy events. The Navy paid for Cline to attend and complete an accelerated program at the Rochester Institute of Technology.

She served six years on land and two at sea before being discharged in 1987 and working in Texas and Virginia in the public and private sectors. She took some time off from working to raise her son and daughter but dabbled in art during that time. Her specialty is stained glass, and she currently owns Artisan View and is a member of the Kentucky Guild of Artists and Craftsmen. However, her two entries in this year’s art competition are paintings, a medium with which she admits she has minimal experience.

“I suffer from debilitating intractable migraines, and I haven’t done much in terms of art as my headaches have gotten worse,” she said. “Painting, and anything really, is tough for me because of the fluorescent lights. I have an entire work area in my basement, but with the lights, and if I start to look down, my headaches just go off the charts.”

Both of Cline’s submissions in this year’s competition are mixed-media paintings. One painting titled “Having a Blast” has already had offers from buyers.

“I want to hold off selling it right now because I think it will go to the national competition,” she said. “Painting the ship was new to me, and painting the blasting was hard. I kept looking at different ones, and I don't even know if it’s a battleship.”

United States Army veteran Douglas Cheek, 58, originally from Nicholasville, said he discovered his love of painting when he was just 9 years old.

“Kids go through phases, and that one lasted probably about eight or nine months before I stopped,” he said. “In 2018, someone suggested I pick it back up, so that's what inspired me to start painting again.”

Some of Cheek’s submitted entries in the competition include an acrylic pour called “The Eye of Heaven,” a black-and-white monochromatic painting titled “Lakeview,” and acrylic paintings titled “Evening Flight” and “Red, White and Blue Trees.”

“It is absolutely therapeutic to paint; at least I know it is for me,” he said. “You come home after a stressful day, and you can go home and hit the brushes and relax and do what you want to do.”

Cheek said he draws inspiration from what he sees around him, but it is usually never what other people see in his paintings.

“Many of my paintings have a Kentucky theme and are very patriotic,” he said. “The paintings themselves kind of speak for themselves. Everybody can look at a painting and get something different — nobody sees the same thing.”

First-place winners in local competitions advance to the national level of judging, and winners at the national level will be invited to attend the 41st National Veterans Creative Arts Festival on April 18-25, 2022, in St. Petersburg, Florida.