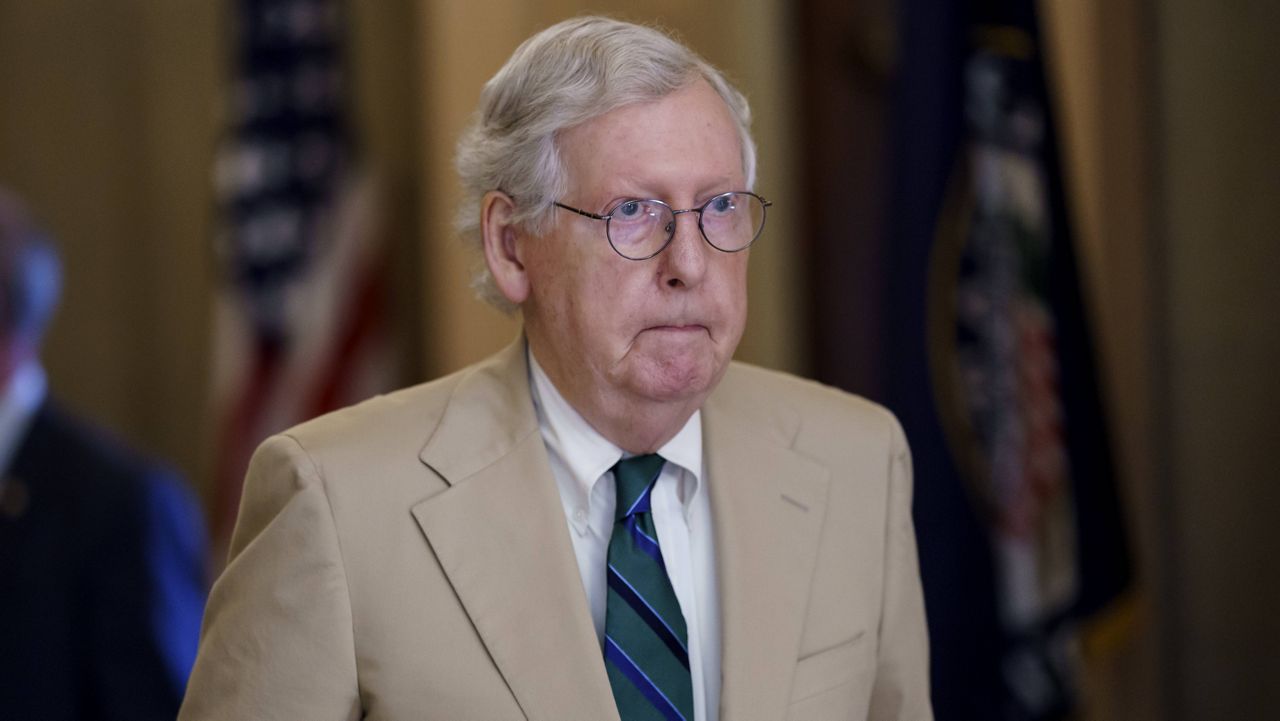 Sen. McConnell, other Kentucky Congress members weigh in on Afghanistan

LOUISVILLE, Ky. — Sen. Mitch McConnell offered a bleak assessment of where the U.S. stands with Afghanistan on Monday.

“I think Afghanistan is lost,” he said following a tour of a manufacturing plant in Louisville.


The top Republican in the Senate spoke shortly before President Joe Biden spoke to the nation, defending his decision to pull troops out of the country.

“I will not repeat the mistakes we’ve made in the past,” Biden said.

The president also said, "I stand squarely behind my decision. After 20 years, I've learned the hard way that there was never a good time to withdraw U.S. forces."

“I think the president felt strongly about this, obviously,” McConnell said. “He overruled his own military leaders to do it, and he owns it.”

Biden followed through on a plan negotiated by former president Trump to withdraw troops this year.

Biden said he had to follow through or risk angering the Taliban anyways.

McConnell disagreed and said the U.S. should’ve stayed in Afghanistan to fight terrorism.

“Not because I thought there was any realistic hope some western-style democratic government was going to emerge in Afghanistan, but because it was in our own national interests,” McConnell said. “Our national interest is why we went there.”

“It was always doomed for failure, and some have said so for a very long time, and proved right time and time again through our recent foreign policy disasters,” Paul wrote in the blog post Monday.

The rest of Kentucky’s congressional delegation has mixed views in statements either provided to Spectrum News 1 or posted on social media:

“President Biden’s botched troop withdrawal has put American lives in danger and arms in the hands of the Taliban while weakening the United States on the global stage.

“I have long supported a withdrawal of American troops from Afghanistan, a corrupt nation that American taxpayers have spent hundreds of billions of dollars propping up for the past 20 years. But such an exit should have been carefully planned, orderly, and focused on keeping Americans safe. Instead, the Biden administration’s lack of diplomatic planning has created an embarrassing failure that Congress must investigate and the president must take ownership for.”

“I’ve been to Bagram Air Base firsthand and visited our brave troops. The United States can’t stay in Afghanistan forever, but we also can’t leave overnight. The Biden administration’s botched withdrawal process is not only a let down to the U.S. men and women who served in Afghanistan, but also to the Afghan people who collaborated with us and we left behind. Images of U.S. personnel evacuating our embassy and Afghan people trying to get on flights to escape from the Taliban are heartbreaking. This could have been avoided, and publicly setting the 9/11 date for withdrawal was irresponsible. Our troops, Afghan allies and allies all over the world risked their lives to support stability in Afghanistan to strengthen security and create a brighter future for children in Afghanistan. They deserved much better from their sacrifices than this chaotic and failed withdrawal.”

“The situation unfolding in Afghanistan is truly heartbreaking. Twenty years and four presidents in, it has never been clearer how misguided and ill-conceived America’s war on terror was. Tragically, the precipitous surrender of Afghan Army troops vividly illustrates the futility of continued U.S. presence there.

“Thousands of American men and women bravely served in Afghanistan for the past two decades, sacrificing life and limb on behalf of our country and theirs. It is our moral obligation to use our economic and diplomatic power to fulfill our commitments to those who have risked their lives to aid in America’s missions in Afghanistan and to protect innocents from the Taliban.

“There is no sugar-coating the horrors that are happening right now, but let’s not pretend that there is a clear or easy solution. A third decade of indefinite war cannot be an option.”

Some are questioning whether this was the right time of the year to leave Afghanistan, but I’m questioning why it didn’t happen at least a decade ago.

The only nation we should be building is our own.

The hubris that led the US to spend 20 years in Afghanistan is the same hubris that caused the withdrawal to become an emergency evacuation.

“President Biden’s precipitous, disorganized and disastrous withdrawal of U.S. troops from Afghanistan has jeopardized everything Americans fought and died for in that country. This catastrophic foreign policy blunder has culminated today with the fall of Kabul to the Taliban, erasing two decades of progress countering radical jihadists who threaten our homeland.”

"The current situation in Afghanistan is a complete and total disaster. President Biden rightfully took responsibility for his decision, which now threatens the lives of U.S. Troops, our Afghan allies and Christians who are now in hiding. As we approach the 20th anniversary of Sept. 11, 2001, we will likely see a Taliban flag flying over the U.S. Embassy in Afghanistan. There may have never been a good time to withdraw U.S. Forces, but there was certainly a better way.

"I will have some tough questions for the Secretary of State, the Pentagon and White House for their inept evacuation of our personnel and our Afghan allies, and squandering our chances for a democracy in that forlorn country."