LOUISVILLE, Ky. — All week, UofL Hospital is hosting Trauma Week in recognition of May being National Trauma Awareness Month. Every year, over 3,600 patients with the most severe injuries, from car accidents to burns, are treated at UofL Hospital Trauma Center.


“The short-term in the emergency department, you have so much impact that you don’t ever see the long-term outcome of the relationships that are developed,” said Clinical Manager Alyssa Parra of one of UofL Hospital’s trauma surgical intensive care units (ICU).

Building relationships is one of the reasons why after 10 years of working in UofL Hospital’s emergency room, Parra switched to work with trauma patients.

“I mean, you just see patients and families on the worst days of their lives, and to be able to make an impact and to just to help them get better,” Parra explained. “And, you know a lot of times, like I said, the outcome can be negative but just to help the patients’ families deal with that, it’s really eye-opening. It’s really humbling, and I just really see the impact that it has on the staff here and the community.”

“Which means that we have all the necessary resources, all these specialty physicians, all the hospital services that would be needed to take care of the sickest of the sick of the patients. Regardless of what type of injury they have,” said Medical Director of the trauma program Dr. Brian Harbrecht, who is also one of the hospital’s primary trauma surgeons.

Harbrecht said most trauma patients at UofL Hospital are from vehicle and motorcycle crashes, while injuries from falls rank third. He also said many patients seen are because of gunshots and stabbings.

“Which has probably been going on since easily 2014 or 2015. It’s just been a gradual, steady increase that has not abated at all,” Harbrecht said.

UofL Hospital Trauma Center is also crucial because it’s one of only two Level I adult trauma centers in Kentucky, but its impact reaches beyond the Commonwealth. According to the center’s 2019 report, 52% of patients came from outside of Louisville and 21% from Indiana, which means many hands on deck to care for patients.

There are also people who don’t work for UofL Hospital Trauma Center that offer support.

“Who help deal with some of the emotional aftermath that can occur after an accident,” Harbrecht said.

On Monday, to kick-start Trauma Week at UofL Hospital, two awards were given to community partners who help with that emotional support. 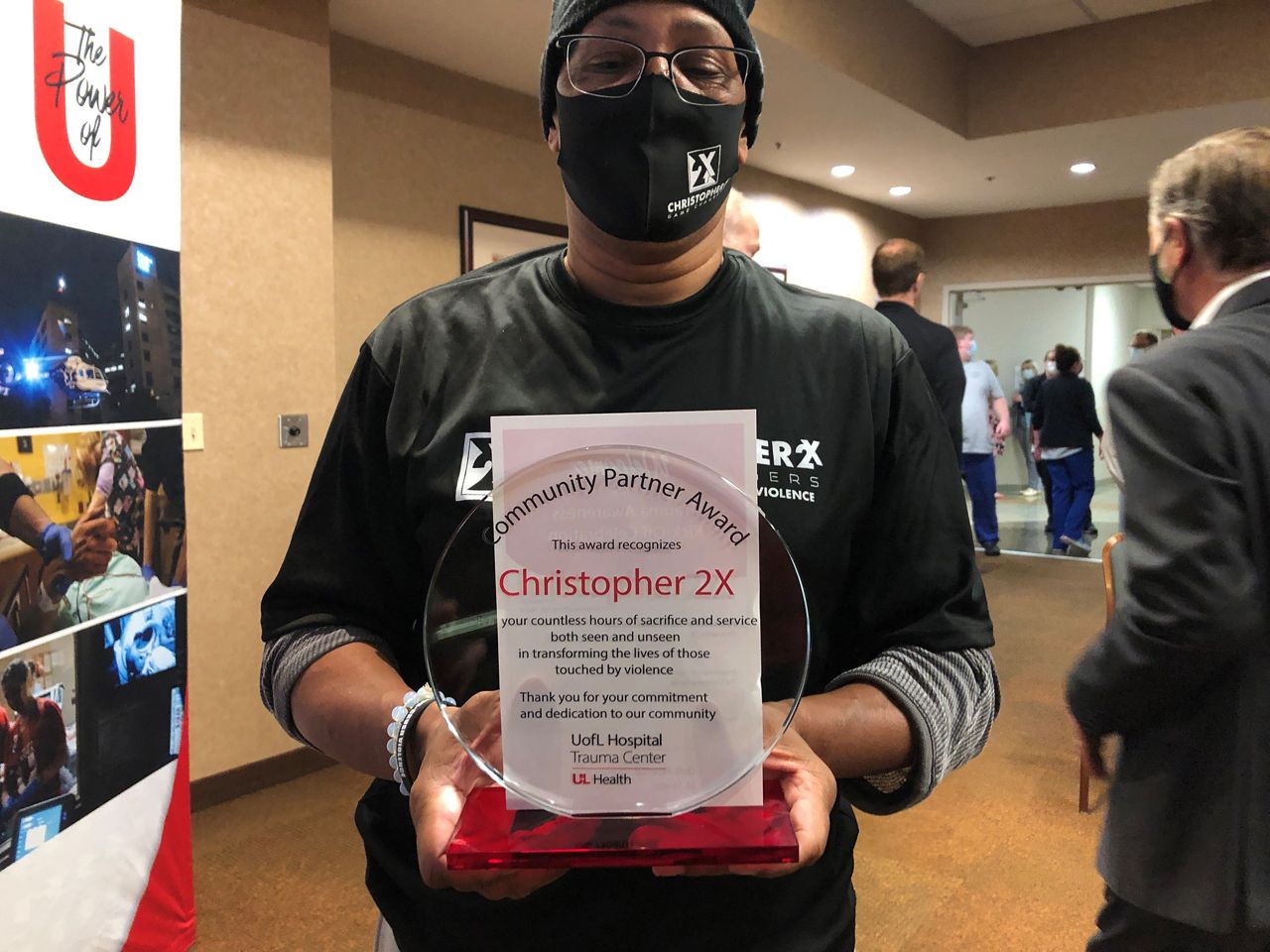 Christopher 2X with Christopher 2X Game Changers poses with his “Community Partner Award” given to him Mon., May 17, 2021 by UofL Hospital Trauma Center during its kick-off Trauma Week event. (Spectrum News 1/Eileen Street)

Christopher 2X, with the non-profit Christoper 2X Game Changers, received the “Community Partner Award” for his service and dedication for the past 15 years of meeting with gun violence victims and their families in the hospital, at any time of day or night, to offer support.

Harbrecht said working with trauma patients at UofL Hospital Trauma Center is more of a vocation than a profession.