By Ashley N. Brown Kentucky
SHARE
FRANKFORT. Ky. — About three dozen people with t-shirts and signs expressing their frustrations with face masks gathered at the steps of the state capitol building for an Unmask Kentucky Rally on Saturday

One of the protesters was Karen Goss. Goss said she’s been following the science behind COVID-19 since the start of the pandemic and thinks masks are useless.

"Masks don’t work. They never have. I’ve gone maskless since the pandemic began and I have not caught COVID. I have not been around others. I have not had any problems,” Goss said. 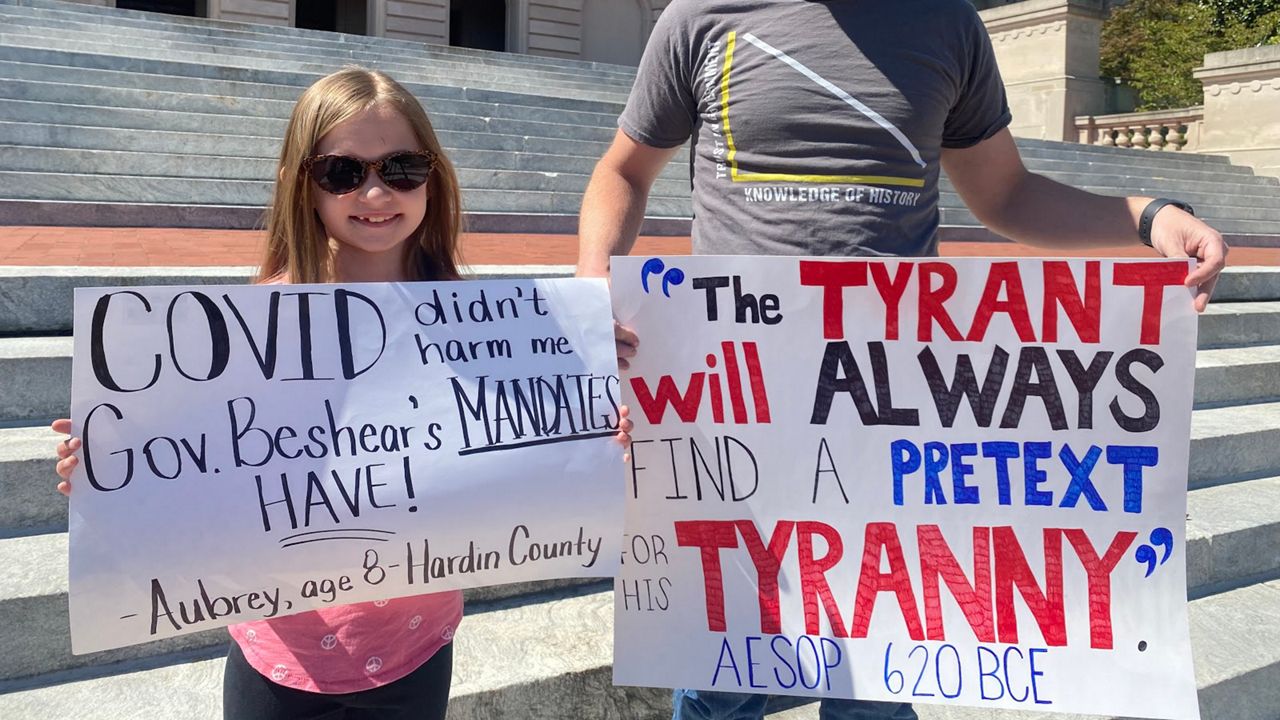 Even some of the protesters who have contracted COVID-19 are still against masks. Corey Romine, his wife and children caught the virus earlier this year.

"The way that the governor is just kept dragging this out, it's been rough on everybody and we just feel like it’s time for him to just lift everything,” Romine said.

He stopped wearing face masks after the vaccine became available to the public and believes it’s time to get rid of them for good.

“When COVID-19 first hit, I was kind of concerned about how liberty just went out the window and everything," Romine said. "I feel like we really need to try to start pushing back on the government to make sure that this doesn’t happen again."

Others who support Gov. Andy Beshear and state health official Dr. Steven Stack met in front of the governor’s mansion as the protest went on.

Chuck Eddy was one of Beshear’s supporters. He says he saw the impact COVID-19 was having before it began to widely spread in the U.S.

"My niece her husband was in the army in northern Italy, so we saw how bad it was going to be. When you look at what Kentucky has done we’ve done better than our surrounding states,” Eddy said.

While some are frustrated with Beshear’s mask mandate and other restrictions, Eddy credits those actions for saving the lives of thousands of Kentuckians.

"I support what Governor Beshear and Dr. Stack have done. They've protected us and it’s been difficult. Dr. Stack was basically in tears talking about what they’ve been through,” Eddy said.

Eddy admires the officials and wishes more people were grateful for their decisions.

"I disagree with these people who are anti-mask, they’re anti-social distance, they’re still anti-vaccine and it’s tragic because people are going to die and I believe people have died because of those kinds of attitudes,” Eddy said.