LOUISVILLE, Ky. — Gigi Love shouted “Yes,” when the first of three guilty verdicts were announced Tuesday in the case against Derek Chauvin, the former Minneapolis police officer who was convicted of murdering George Floyd last year.

Love was one of the few protesters Tuesday at a sparsely populated Jefferson Square Park in downtown Louisville. The park emerged last summer as the hub of protests against the police killing of Breonna Taylor, but the memorial honoring the 26-year-old former EMT was recently removed and the protests in Louisville has died down.

Asked why it was important for her to be at the park to hear the verdict, Love said, “This is where we demand justice. We hold it down here for justice and this is where we fight, cry, celebrate — this is where do do it and I’m surprised there aren't more people here. But I'm here and that’s all that matters.”

Not many people at Jefferson Square Park as the Chauvin verdict was announced. Gigi Love was one of the few who came down. Here’s why: pic.twitter.com/m7iwD9KVCT

“I need to know how much time he’s actually going to do in jail,” Love said.

Others, at least on this day, were happy to concentrate on the good news in front of them. Drivers honked as they drove past the park. A woman with a bullhorn yelled, “He’s guilty” from the window of a parked car. And another, stopped at a light in her sedan, began a chant of “All three charges. All three charges.”

Neal Robertson, president of the West Louisville Urban Coalition, stood on the sidewalk near the park and told reporters that he never thought Chauvin would be found guilty. “I told my friend there’s no way in the world if they're going to convict a white man,” he said. “History taught me that.”

Despite his satisfaction with the Chauvin verdict, Robertson said Louisville “has a lot of work to do.” He mentioned the way the “West End looks,” and said Louisville must focus on lifting up residents of its most neglected areas.

“We have to build back up our city,” he said. 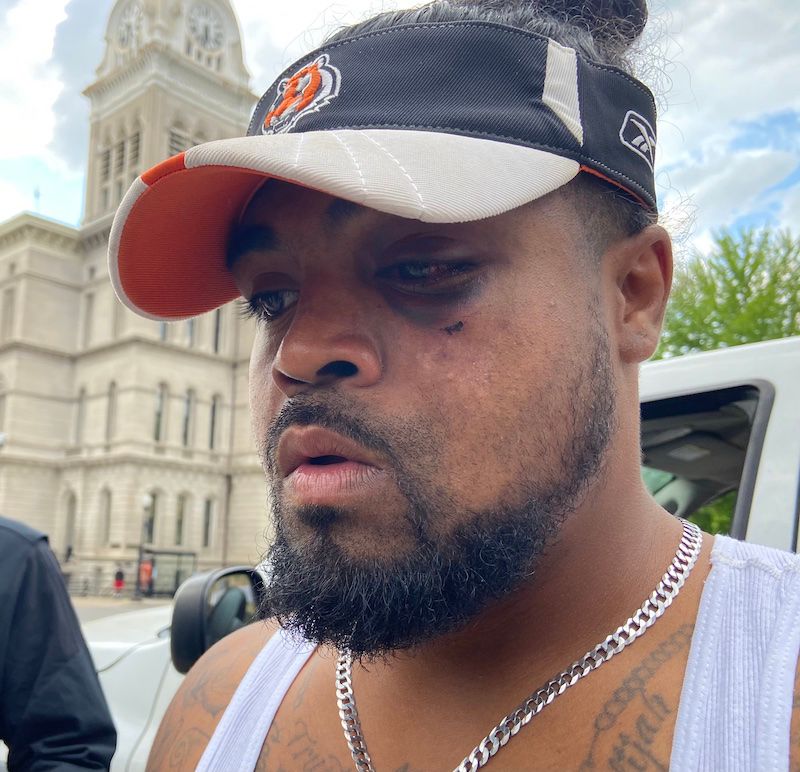 Roughly 30 minutes after the verdict was announced, Dee Garrett arrived at the park. On Sunday, Garrett was arrested while protesting against police brutality in Jefferson Street, just outside of the park. A video taken of his arrest, which showed a Louisville Metro Police Department (LMPD) officer punching him in the face, went viral.

LMPD chief Erica Shields said the officer’s behavior in the video “raises serious questions and is not consistent with LMPD training.” She also announced an internal investigation.

On Tuesday, his face still purple and red from the incident, Garrett recounted the events that led to his arrest. As he spoke, Love stood a few feet away, wearing a shirt that said, “George Floyd is not on trial,” and raising her fist in the air.