Many question the safety of the Brent Spence Bridge, which not only connects Covington to Cincinnati, but also connects the country. Few question the notion that the bridge needs some serious work done.

But a lot needs to happen before that work can start, and it could be years away. The Brent Spence Bridge opened in 1963. It’s now 58 years old, and is definitely showing its age.

“Bridges of that vintage were usually designed for a life of 50 years,” said Andy Herrmann, former president of the American Society of Civil Engineers.

The bridge was built to handle around 80,000 vehicles a day. Now more than 160,000 vehicles drive across it every day, according to Mark Policinski, the CEO of the Ohio Kentucky Indiana Regional Council of Governments. OKI, as it’s abbreviated, has complete authority over all surface transportation projects in the region.

“This bridge, since almost the day it was built, was going to be over capacity,” Policinksi said.

The American Trucking Association said the bridge is the second most congested point for trucks in the United States.

The American Transport Research Institute rated it the second most congested bridge in the country. 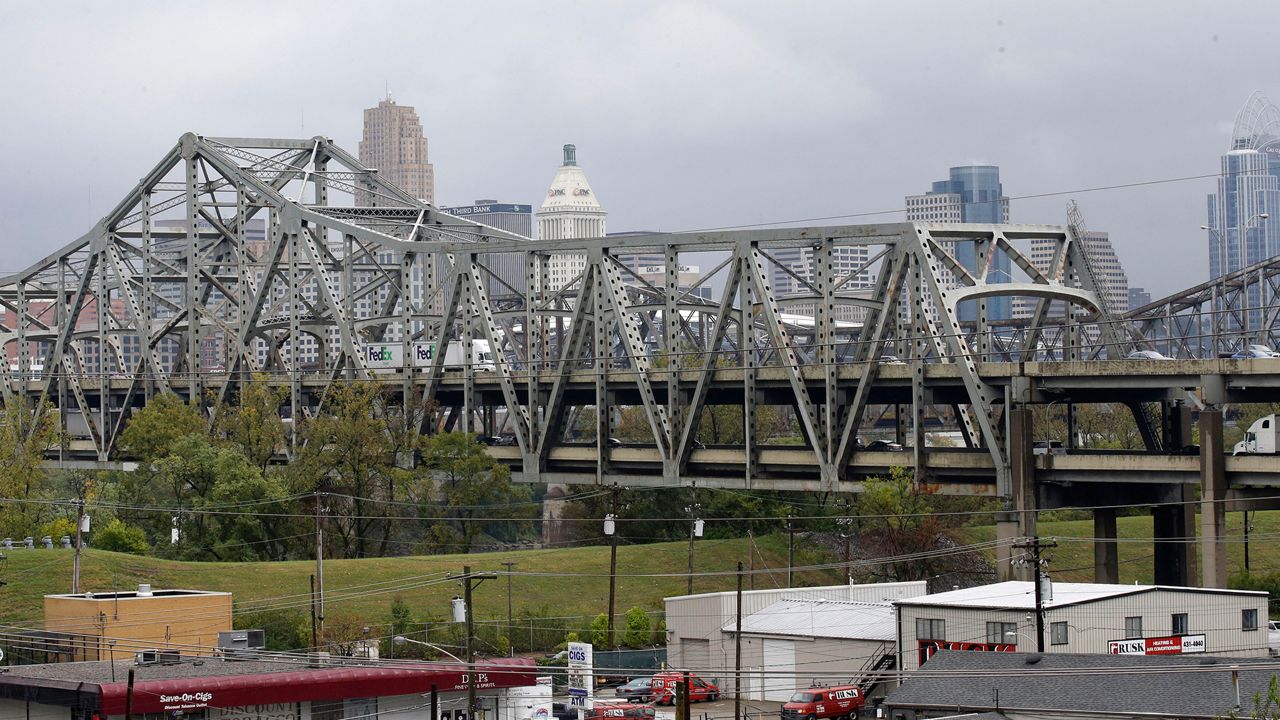 At the northern point of the bridge, three interstate highways come together. The bridge is the lynchpin to the I-75 trade route, once the busiest in the U.S.

“This bridge carries about three percent of the whole nation’s gross domestic product. So it’s taken a lot of freight,” Herrmann said.

After all the wear and tear over the years, the Brent Spence is now designated as functionally obsolete, meaning not up to current standards. Herrmann said studies have shown the bridge needs at least twice the amount of the current eight lanes it has to support the amount of traffic.

The lane widths are only about 11 feet. Herrmann said they should be at least 12 feet. When the bridge was made to be four lanes in either direction instead of three, it left very little shoulder space.

“What you have is a bridge that is unsafe. It’s not fall in the water, but it’s unsafe to travel on,” Policinski said. “The need for a new bridge is obvious. It’s been obvious. And we need to get it fixed.”

There have been plans in place to fix the bridge and build a companion bridge beside it since the late 1990s and early 2000s. Both Ohio and Kentucky’s governors are on board with the plans, as well as both state transportation departments.

"If there is a project with a penny of federal money in it in the region, it needs OKI’s approval to move forward, or secure that federal funding," Policinski said.

He said debates at the local level over the size of the bridge, tolling and traffic diversion have held up the process of securing federal funding in the past. The mayor of Covington, for example, said he thinks the current design plan of a new bridge is too big.

“It's not Washington's fault that we don’t have this bridge built. It’s the fact that we haven’t been able, at the local level, to put together a sound financial plan,” Policinski said. “I wouldn’t want my federal tax dollars to go into projects that, you know, they kind of got it together, and maybe it’ll work.”

Herrmann said, even when funding is secured, fixing the Brent Spence Bridge and building a new bridge could take two to three years.

So a bridge that’s past its lifespan, on which hundreds of thousands of people continue to drive on every day, could still be years away from any improvements.

“You know, somebody said, are we in the early innings of this whole infrastructure bill? And I said no, we’re in the first few pitches,” Policinski said. “The bridge has to be built. It’s that simple. This economy in this part of the region, our quality of life in this region is harmed everyday that bridge is not built.”