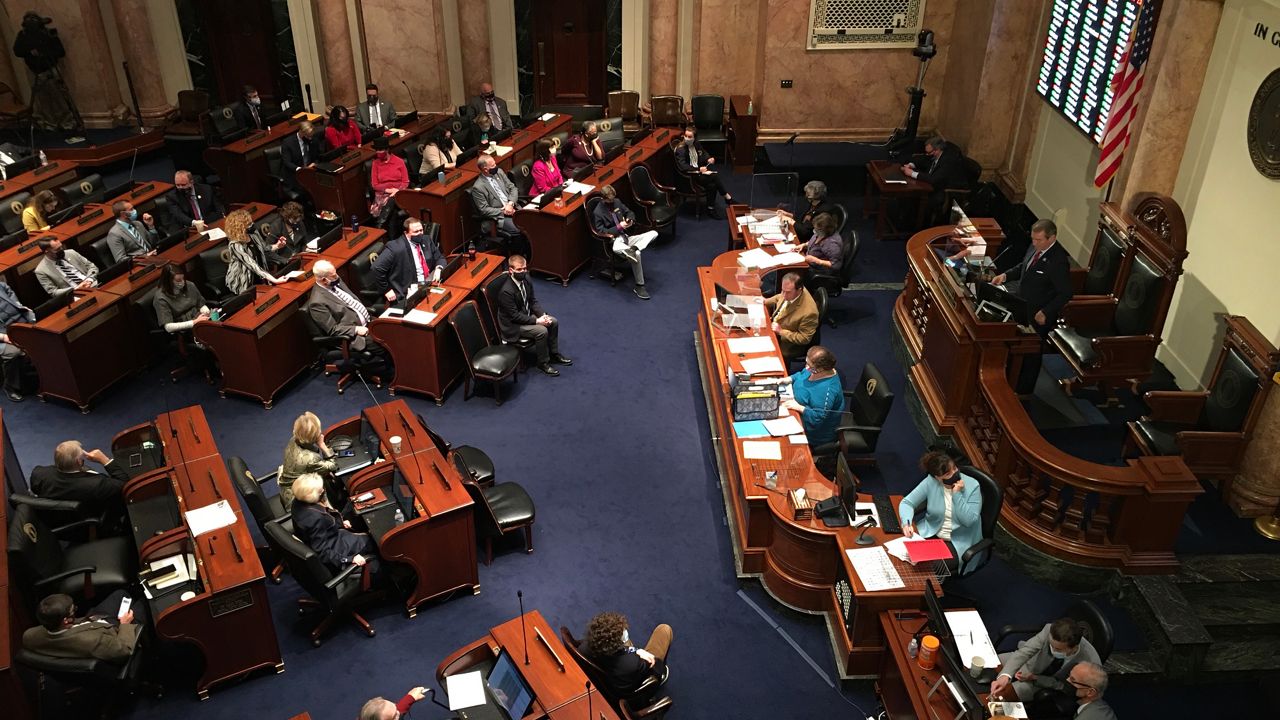 “We needed to be very conservative, that this was a continuation budget, that we only make absolutely necessary modifications in order to move us along to next year,” said Senate Budget Committee Chairman Sen. Chris McDaniel, R-Taylor Mill. “We want to make sure we have a healthy budget reserve trust fund in the event anything else goes wrong.”

The state's main budget bill does not include many of the items Gov. Andy Beshear (D) wants, like more education funding or raises for teachers and state employees.

What it does include is $743 million for the state’s so-called "rainy day" fund, far more than the $100 million Beshear wanted to set aside.

Democrats like Senate Minority Floor Leader Morgan McGarvey, D-Louisville, want to see more of that money spent in the budget.

“This cannot be the final budget that comes out of this legislature,” McGarvey said. “We will not have done what we needed to do as an institution, as legislators, as people, to help move our state ahead.”

The Senate approved the bill 30-0 with six pass votes Monday afternoon. Sen. C.B Embry, R-Morgantown, was the only Republican to join five Democrats in voting pass on the measure.

House Democrats were more critical of the bill on the floor later in the evening, representing the only lawmakers to vote against the budget deal in either chamber after the House passed it by 74-23 vote.

“This was a time for us to take bold action and to create a forward-thinking budget with new revenue,” said Rep. Cherlynn Stevenson, D-Lexington. “And instead, this budget is simply disappointing.”

Two Democrats joined every Republican in voting for the bill in the House: Rep. Ashley Tackett Laferty, D-Martin, and Rep. Tina Bojanowski, D-Louisville.

Bojanowski criticized the bill because it didn’t increase education funding or include money for new textbooks, but decided to vote in favor of it after hearing more information during the debate.

“I would very much like to be a part of finding the solution to some of the questions that you have about education, and I know this is just a huge project,” Bojanowski said. “I’m here for public education 100%, but I’m going to vote for this budget because of the feedback I got from the sponsor.”

Sen. Robin Webb, D-Grayson, was the only Senate Democrat to vote in favor of the budget.

Just as state lawmakers were finishing the budget, Congress passed a new coronavirus relief package, meaning the state has $2.4 billion to spend in certain areas.

The budget proposal specifically says only state lawmakers can spend that money. McDaniel said the Kentucky constitution requires the General Assembly to appropriate the money.

“It is merely a statement of legislative branch prerogative that we authorize those,” McDaniel said.

The American Rescue Plan Act also includes around $2 billion for Kentucky schools. House Budget Committee Chairman Rep. Jason Petrie, R-Elkton, said it wouldn’t be an "efficient" use of taxpayer dollars to increase funding on the state level at the same time.

“I want to find a way to adequately fund public education so it is even more successful, continually,” Petrie said. “But we’re going to have to have work on that.”

Petrie said the state’s education funding formula, known as SEEK, will have to be modified to accomplish that goal.

With the new federal funds for the state, Senate President Robert Stivers, R-Manchester, says the legislature may need to pass a few more budget bills to get the $2.4 billion where it’s needed.

“We need to pass this and then we really need to sit down and start the real work,” Stivers said.

And McGarvey hopes it goes to good use.

“We can make sure that every Kentuckian has access to clean drinking water; that every Kentuckian is connected to the internet,” McGarvey said. “We can use this money to pay off the unemployment insurance trust (fund) loan that will hit so many of our small businesses that are already struggling.”

With budget bills, Gov. Beshear can veto the entire proposal or line-item veto certain expenditures or certain language. Republicans hold majorities in both chambers and would likely override his veto.

Beshear said he hopes to see some changes before the budget gets final approval.

Beshear also said he hopes to reach an agreement with lawmakers on how to spend a significant portion of the new federal relief fund before the legislative session ends.

Lawmakers have three working days left in the session. They will move through more bills Tuesday before taking time off for the veto period, returning on March 29-30 for veto override votes and any other last-minute work on legislation.

Typically, the legislature only passes budget bills in even-numbered years when the session is longer, but lawmakers passed a one-year spending plan last year as the COVID-19 pandemic started in Kentucky. This year's plan would carry lawmakers until regular budget talks begin again next session.