LOUISVILLE, Ky. — Paul Hornung, the legendary football player died Friday in his hometown of Louisville, Ky. after a lengthy battle with dementia. He was 84.

Nicknamed  "The Golden Boy" because of his blond hair and movie-star good looks, Hornung played college football for Notre Dame and won the 1956 Heisman Trophy.  He remains the only player to win the award in its 85 years while playing for a team with a losing record. 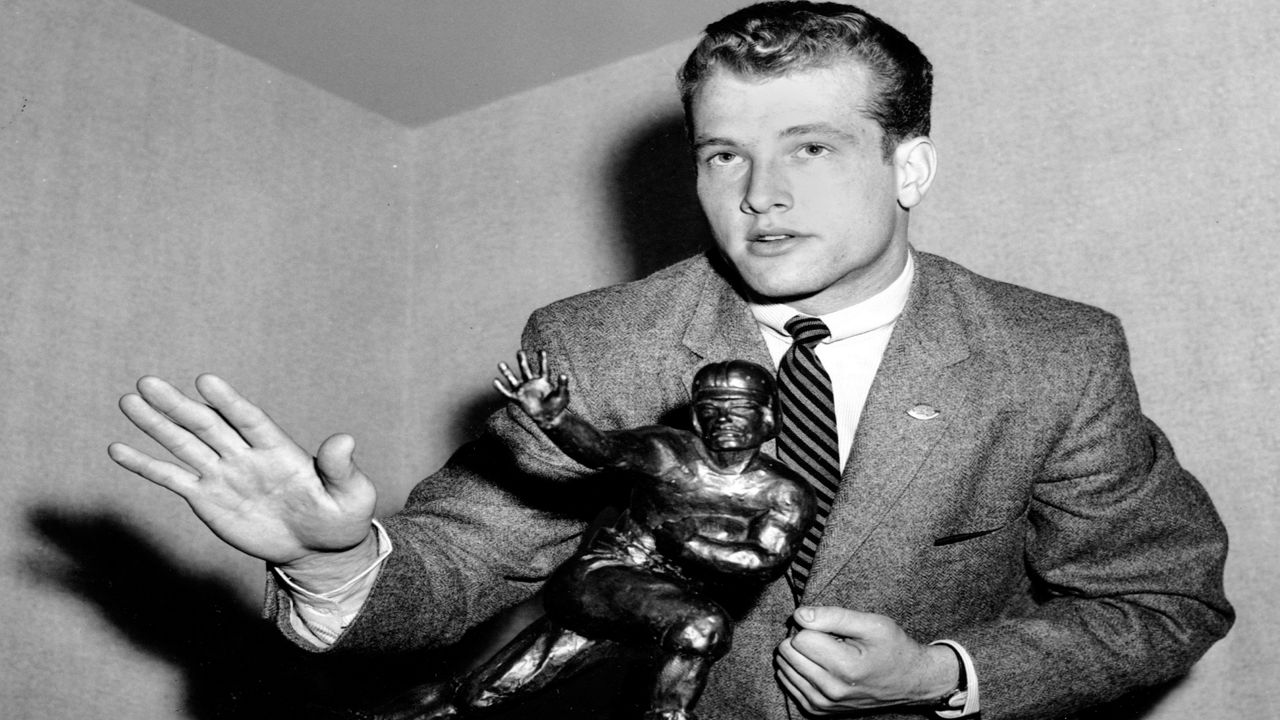 Paul Hornung remains the only college football player to win the Heisman Trophy while playing for a team with a losing record.

After his stellar collegiate career, Hornung went on to play for the Green Bay Packers.

In 1957, Hornung was the number one pick of the Packers and became an all-pro halfback in the 1960s with his ability to run, pass, catch, block, and kick.  Hall of Fame Coach Vince Lombardi once called Hornung, "The most versatile man ever to play the game."

The pinnacle of Hornung's NFL career happened from 1959 until 1961 when he led the NFL in scoring two of those years and finished second in the other by only a single point.  In 1960 Hornung scored a record 176 points in 12 games with 15 touchdowns, 15 field goals, and 41 extra points — a record that would stand for 46 years.

But football wasn't Hornung's only obligation.  In 1961 he was called to active duty by the U.S. Army to fulfill his ROTC requirements from Notre Dame.  He would get weekend passes to play for the Packers including a 37-0 blanking of the New York Giants in the 1961 Championship.

News of his passing spread quickly and reaction is pouring in.

After retiring from football, Hornung put his business degree to work and had a successful real estate and investment career. He also started a career as a sports radio and television commentator.  Hornung served as a college and pro football analyst for CBS, TBS, and ABC Radio. He also was the color commentator on the radio for the Minnesota Vikings and Notre Dame.

Hornung wrote a number of books, including, “My Private Collection: The Paul Hornung Scrapbook” and “Lombardi and Me: Players, Coaches, and Colleagues Talk about the Man and the Myth”.

Due to COVID-19 restrictions, there will be a private funeral mass at St. Louis Bertrand Church in Louisville followed by a private burial in Cave Hill Cemetery.  In lieu of flowers, the family requests donations be made to the Norton Sports Health Athletics and Learning Complex via the Louisville Urban League, 1535 West Broadway, Louisville, Ky., 40203; or the Sister Visitor Center via Catholic Charities of Louisville, 2911 South Fourth Street, Louisville, Ky., 40208.