LOUISVILLE, Ky. — Results from the second round of the University of Louisville's series of studies tracking COVID-19 infections in Metro Louisville are in, showing high levels of infection in the area. However, the virus is more prevalent in some areas compared to others.

The Co-Immunity Project, at UofL's Christina Lee Brown Envirome Institute, is a series of studies looking to estimate the prevalance of SARS-CoV-2, the virus causing COVID-19, in Jefferson County. The project tests a representative sample of residents from different areas in Louisville, proportionate to the age and race of the population of the area, every eight weeks.

The results from the latest round confirm previous findings, indicating that roughly 30,000-40,000 people may have been exposed to the virus in Jefferson County since the pandemic's start. As well, the results indicate those rates of infection are higher in West Louisville compared to other neighborhoods.

“These findings confirm our previous results that coronavirus infections have been more prevalent in our community than previous testing would suggest. We estimate that nearly 34,000 individuals (between 21,470 and 52,900) may have been exposed to the virus – a number much higher than the 17,516 cases reported in the city by the end of September,” said Aruni Bhatnagar, Ph.D., director of the UofL Christina Lee Brown Envirome Institute.

By randomly sampling the different neighborhoods, the project identifies areas with high prevalence of infections. In western Jefferson County, the rate of infection is roughly 10-12% compared to 2-4% in other parts of the county.

“This marked disparity between the rates of infection in different parts of the city is sobering,” Bhatnagar said. “It should persuade us to engage community leaders about prevention and testing as well as to devote a greater proportion of resources for testing, prevention and treatment of COVID-19 in West Louisville neighborhoods.”

In the most recent sampling effort, researchers mailed out 32,000 letters to households across Louisville, following up the invitation letters with post card reminders, some delivered in person.

Over a period of 10 days from Sept. 9 to Sept. 19, researchers tested 2,208 people at seven different community drive-up locations for the presence of coronavirus in nasal swabs and for antibodies in their blood. The samples were then analyzed at UofL's Regional Biocontainment Laboratory (RBL) by the Center for Predictive Medicine for Biodefense and Emerging Infectious Disease (CPM).

People who received invites were selected by using addresses from U.S. Census Bureau tract boundaries. Areas that had higher concentrations of non-White residents were sampled at a higher rate to increase their representation.

In total, 2,208 individuals were tested, 1,576 in response to the invitations and 632 who booked an appointment after hearing about the study in the news or on social media. 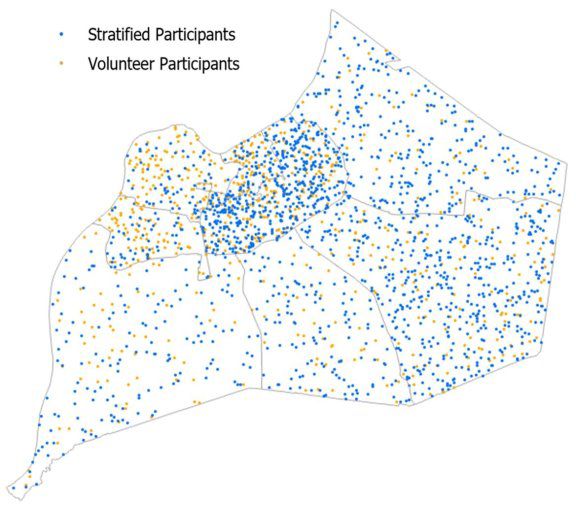 MAP 1: Residential locations of individuals tested for coronavirus infection during the second round of Co-Immunity Project Phase II. Blue dots are participants who responded to mailed invitation and yellow dots are individuals who self-volunteered for testing. Courtesy of UofL.

Among the participants, at least 0.2% had an active infection at the time of the study while nearly 4.4% (5.1 to 3.2%) had detectable levels of antibodies in their blood.

“Comparing our results with the data provided by the city, it seems that more than half the number of infected individuals have not been tested,” said Rachel Keith, Ph.D., assistant professor of environmental medicine at UofL, who conducted the study. “Reasons for this discrepancy may be that many infected individuals may not have had any symptoms or may not have been tested due to access issues. I believe we have to do a better job in overcoming hesitations in testing, in encouraging testing and in testing individuals across different neighborhoods, even if they do not have any symptoms.” 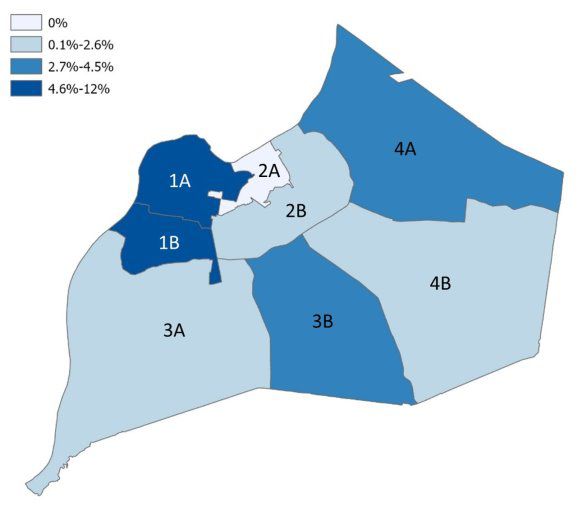