RICHMOND, Ky. – The massive and delicate undertaking of destroying the more than 101,000 chemical weapons stockpiled at the Blue Grass Army Depot in Madison County is progressing.


The Blue Grass Chemical Agent-Destruction Pilot Plant, or BGCAPP, began processing mustard agent in June 2019. That effort is about 40 percent complete. The plant this past January began the first nerve agent destruction campaign of nearly 4,000 munitions totaling 57 tons of chemical agent, which was completed in May. Project personnel is now preparing for the next nerve agent-destruction campaign scheduled to begin later this year. 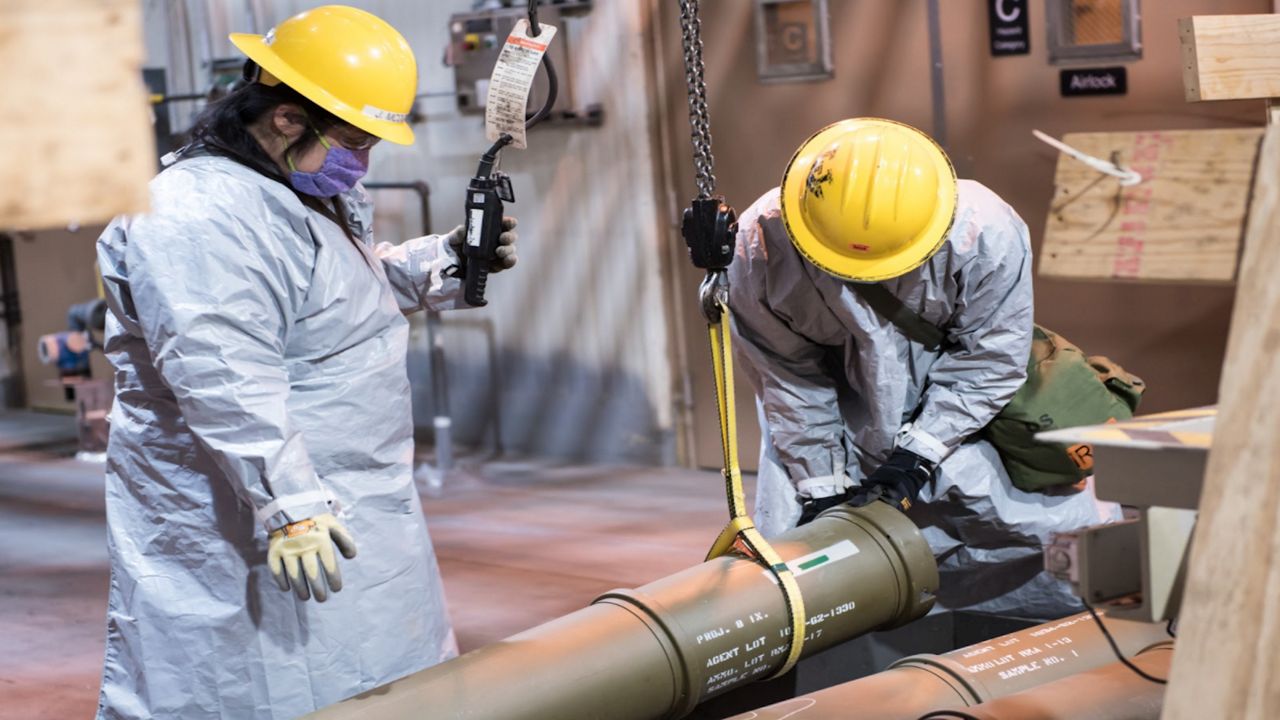 “A project with a scope of this size, and the complexity, will always have challenges, and COVID-19 is obviously one,” said Mark York, communications manager at Bechtel National Inc., the contractor chosen to design, construct, systemize, operate and close BGCAPP. “It actually hit while we were in the process of destroying the GB nerve agent in our main plant, as well as mustard agent in our explosive destruction technology facility. But we were able to complete the GB project slightly ahead of schedule. And we’re continuing to work on the destruction of mustard agent. So we've not missed any days or time or had any schedule impacts due to COVID-19. Again, because it’s a complex project, there are always technical challenges that come up, but we’ve been able to meet those challenges and move on.”

The Blue Grass Army Depot, or BGAD, was built in 1941 and is, among other missions, a storage facility for conventional and chemical weapons. A tenant organization, the Blue Grass Chemical Activity, is responsible for safely and securely storing and monitoring those chemical weapons munitions, which consists of 155mm projectiles, 8-inch projectiles, and M55 rockets containing mustard agent, and nerve agents GB (sarin) and VX. The U.S. Department of Defense’s Program Executive Office, Assembled Chemical Weapons Alternatives, or PEO-ACWA, is responsible for safely destroying these weapons, thereby eliminating the risk associated with continued storage. 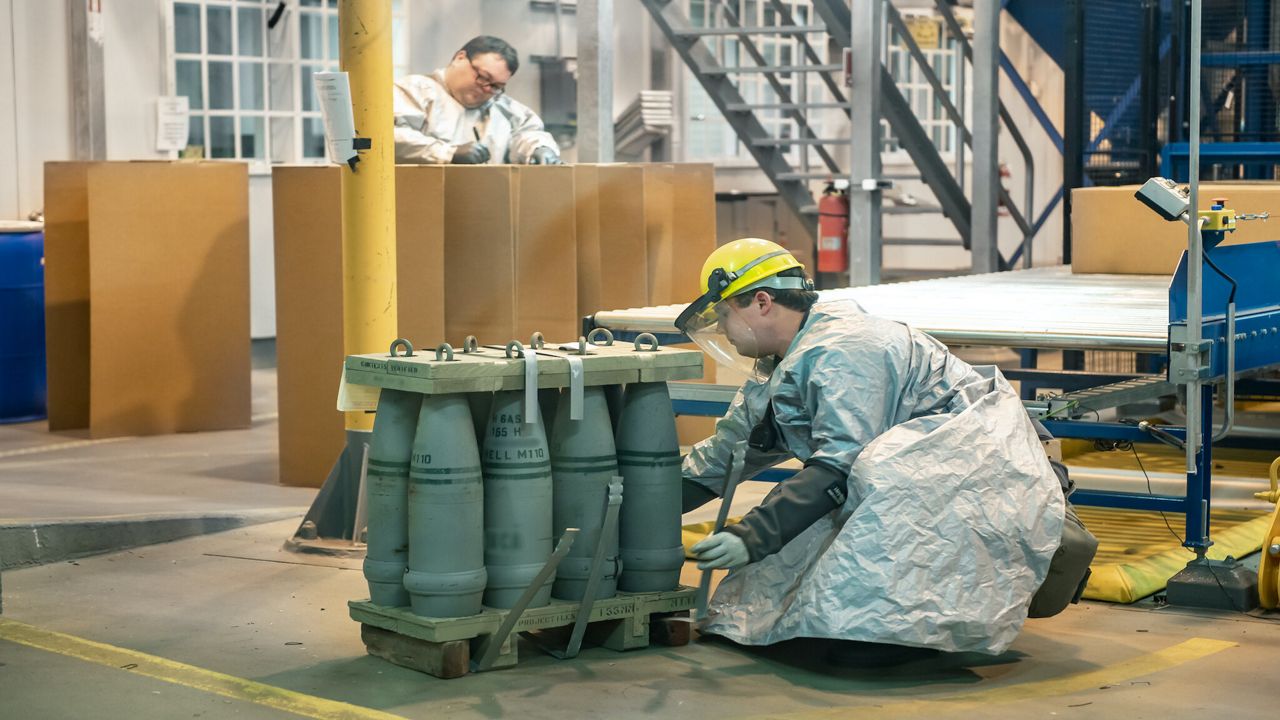 Stockpile sites in Colorado and Kentucky account for the last 10 percent of what was originally a national stockpile of more than 30,000 tons of chemical weapons. The U.S. Army Chemical Materials Activity destroyed the initial 90 percent, which was stored at seven other sites across the U.S. and on Johnston Atoll in the Pacific Ocean. Chemical weapons destruction in Colorado began in 2015, and that site and the Kentucky site will complete the elimination of chemical weapons by Dec. 31, 2023.

The Blue Grass plant uses neutralization followed by supercritical oxidation, known as SCWO, to destroy the nerve agent stockpile. SCWO blends water, fuel, air and hydrolysate in a specialized vessel at temperatures and pressure conditions above the critical point of water. Water is recycled in the plant, and the salt solution, or brine, is shipped for disposal at a permitted facility. Trained workers and state-of-the-art robotic systems are employed to ensure the safe destruction of the stockpile. The robotic equipment disassembles the munitions and the nerve agent is drained and separated from the explosive components. The agent is neutralized with hot water and a high-pH caustic solution called hydrolysate.

The metal parts of the munitions are heated to 1,000 degrees Fahrenheit for 15 minutes and can then be safely recycled.

An X-ray assessment of the Blue Grass stockpile determined numerous projectiles contained solidified mustard agent and could not be easily processed by the plant’s automated equipment. As a result, an Explosive Destruction Technology facility was built to destroy the mustard agent stockpile using a Static Detonation Chamber, or SDC. A second, larger SDC has also been placed at the Blue Grass plant. Both SDCs will augment the plant to destroy drained rocket warheads and overpacked M55 rockets.

High heat deflagrates or detonates the projectiles and the mustard agent and energetics are destroyed by thermal decomposition. An air pollution abatement system treats off-gases.

The protection of the environment surrounding BGAD is one of the project’s top considerations. Environmental permits for the plant are based on special environmental studies conducted locally. Additionally, the environment is continually monitored during destruction activities to ensure operations protect the area. Oversight is provided by the EPA and the Kentucky Department for Environmental Protection during the entire process.

Once all munitions have been destroyed, areas of the plant that have come in contact with a chemical agent will be decontaminated and the equipment dismantled according to regulatory requirements. 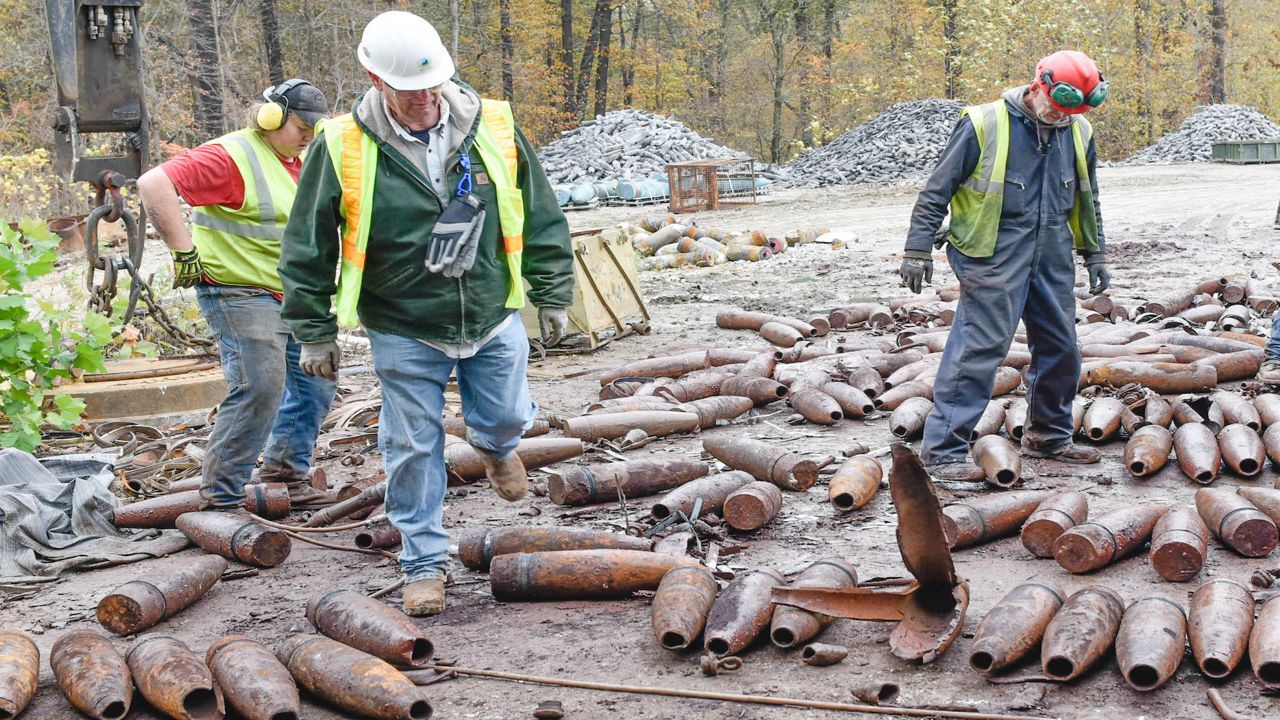 The United States is part of the Chemical Weapons Convention, which is a multilateral treaty that bans chemical weapons and requires their destruction within a specified period. There were once nine chemical weapon stockpile sites across the United States; seven of those stockpiles have been destroyed. There are two left, one in Pueblo, Colorado, and the Kentucky site. Ninety percent of the country’s stockpile of chemical weapons has been destroyed, and of the remaining 10 percent, close to 8 percent is in Colorado and around 2 percent at BGAD.

“From a planning standpoint, the smallest stockpile would probably be the last one, and that's the case here,” York said. “That's actually an advantage for us because there are lessons learned from other sites that we've been able to incorporate here. About 50 percent of our 1,200 workers are made up of a local workforce and the remaining are made up of people who have worked at other stockpile sites. We have experienced people bringing their knowledge, experience and lessons learned.”

The use of the roughly $4 billion in buildings, equipment, and other infrastructure to store and remove the chemicals will be determined by the Department of the Army, Commonwealth of Kentucky, PEO ACWA and BGAD is complete. The depot will continue with its missions of supplying munitions, chemical defense equipment and Special Operations support to the DOD.

“We're on a 250-acre portion of the Depot, which sits on 15,000 acres,” York said. “Our mission is to destroy the chemical weapons here, which is totally separate from the Blue Grass Army Depot’s main mission, which is dealing with conventional weapons. Every day we are working ourselves out of a job. Our mission is going to go away, but the Depot will remain as it always has.”