Mountain Parkway: Closing the Gap Between Central and Eastern Kentucky

CAMPTON, Ky. – The trip to Central Kentucky from rural Eastern Kentucky is getting easier with the improvements being made to the Bert T. Combs Mountain Parkway, one of the main roads connecting the two parts of the state.

The Mountain Parkway runs from Interstate 64 just east of Winchester southeast for nearly 76 miles to a junction with U.S. Route 460 near Salyersville in Magoffin County. The first 46 miles, beginning at the western terminus in Winchester, is a four-lane limited-access highway while the remainder is a limited-access Super Two highway, which is a two-lane surface road built to highway standards, typically including partial control of access, occasional passing lanes and hard shoulders. Super Two highways are often built for eventual conversion to a freeway or at least divided highway status once traffic volumes rise.

The six- to 10-year construction project to widen 46 miles of the two-lane section of the Mountain Parkway to four lanes began in 2015 in Salyersville. Gov. Andy Beshear (D) and Sen. Mitch McConnell (R) announced this past June the Kentucky Transportation Cabinet had received $55,150,000 through a U.S. Department of Transportation Infrastructure for Rebuilding America grant to widen 11 miles of the Parkway in Wolfe County, which is about 56 miles east of Lexington.

“With this competitive federal grant, we are investing in Eastern Kentucky’s people and their future,” McConnell said in a press release. “I was proud to help secure these resources to bring new commerce and opportunity into the region. As the only congressional leader not from New York or California, it’s my responsibility to speak up for Middle America and especially Kentucky. We are tapping into communities throughout Appalachia to continue encouraging job growth and community development. Working with Congressmen Barr and Rogers, I’m proud to support this wonderful region and its great potential.”

C2 Strategic Communications Staff Strategist Chelsea Spring, speaking on behalf of Kentucky Secretary of Transportation Jim Gray, said the Wolfe County segment will be let to construction – meaning the state will begin to select contractors for the project – in October 2022. Construction will likely begin during the spring of 2023, with an intention to complete construction during the summer of 2027, Spring said.

Gov. Beshear said in a press release the grant allows construction that will increase capacity for freight and goods along the Parkway, reduce travel time and connect Eastern Kentucky to the rest of the Commonwealth. 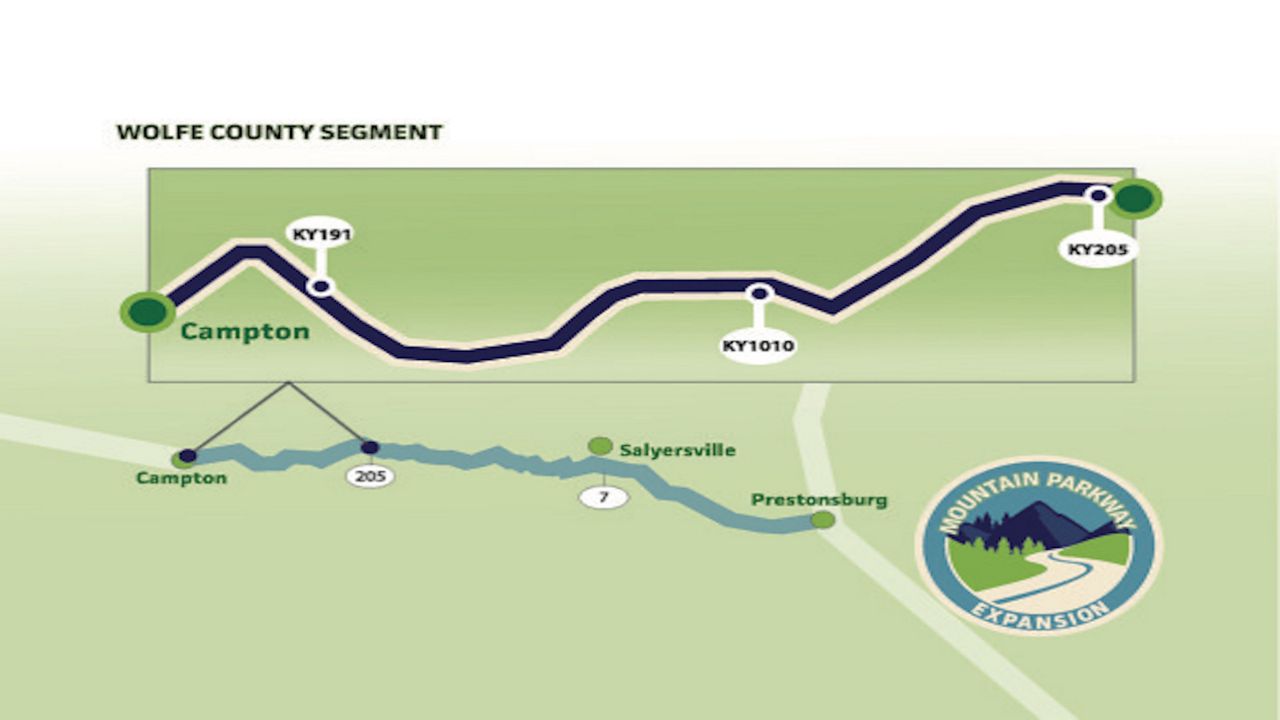 The Wolfe County section of the expansion.

“This is a great step forward for the people of Eastern Kentucky, is great news for Team Kentucky and will open up the region for so many opportunities,” Beshear said.

The Wolfe County segment is the last remaining two-lane section of the Mountain Parkway between I-64 and Salyersville. Upgrades funded by the grant aim to improve the safety and efficiency of travel through the corridor; provide for the reconstruction of the existing Campton interchange to allow full eastbound and westbound access; and modernize the Hazel Green interchange to improve safety and mobility.

“Moving forward with construction on the Wolfe County segment will bring the Mountain Parkway Expansion one step closer to closing the only gap in a 400-mile, four-lane, high-speed corridor for commerce and mobility across Kentucky,” Gray said. “Closing this gap is an investment in safety, in future economic development and most of all, in Kentuckians.”

The Mountain Parkway Expansion Project includes six segments overall – Salyersville Restaurant Row, Magoffin County Central, Wolfe County, Morgan County, Magoffin County West and KY 114 – and two of those, Salyersville Restaurant Row (2.4 miles) and Magoffin County Central (5.7 miles) are complete. Work on the 4.6-mile Magoffin County West segment has begun, which includes widening the parkway to four lanes between mile points 65 and 69.6, making safety improvements to a sharp curve around the mountain and adding an interchange at KY 3046 to provide local Parkway access. Construction on the 8.2-mile Morgan County segment has also begun, which includes widening the Parkway to four lanes, improvements to two existing interchanges and reconstructing an “S” curve near the Morgan-Magoffin county line to improve safety and mobility.

The Mountain Parkway Expansion Project also extends the Parkway by about 16 miles between Salyersville and Prestonsburg in Floyd County.

Updates on this project can be found online.