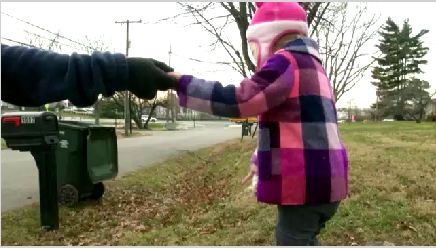 GOSHEN, Ky.-- Instead of learning math and reading from beyond the grasp of a three-year-old mind, Thrive Forest School at Creasey Mahan Nature Preserve, puts kids outdoors to learn with their imaginations through curiosity about the world around them. It's the first outdoor preschool in the Louisville area.

The preschool for children ages three to six, is nature-based. Founder Ryan Devlin says free-play prepares the kids for learning later, by encouraging curiosity and creativity that makes learning fun.

"It's happening naturally, not from a book or not from some sort of lesson plan that a child at three-years-old isn't able to absorb, but because they're doing it," Ryan Devlin says.

Parent Kay Eskridge says it goes beyond that for her daughter, Julia. She turned three in October.

"What she admires in other kids is not, you know, they're pretty or you know they have pretty hair or pretty clothes," says Eskridge, "but she admires how well they play with sticks... who's a good climber- that's a big thing that she's impressed by. That shows me that her emphasis is on things which I think are more important, which is being outside and playing and not you know, appearances," she says.

Devlin says the school's motto is that there's no bad weather, only bad clothing choices. He assures parents that when there are hazardous conditions like in storms, the kids do go indoors to the nature center.

You can learn more on the new school here.