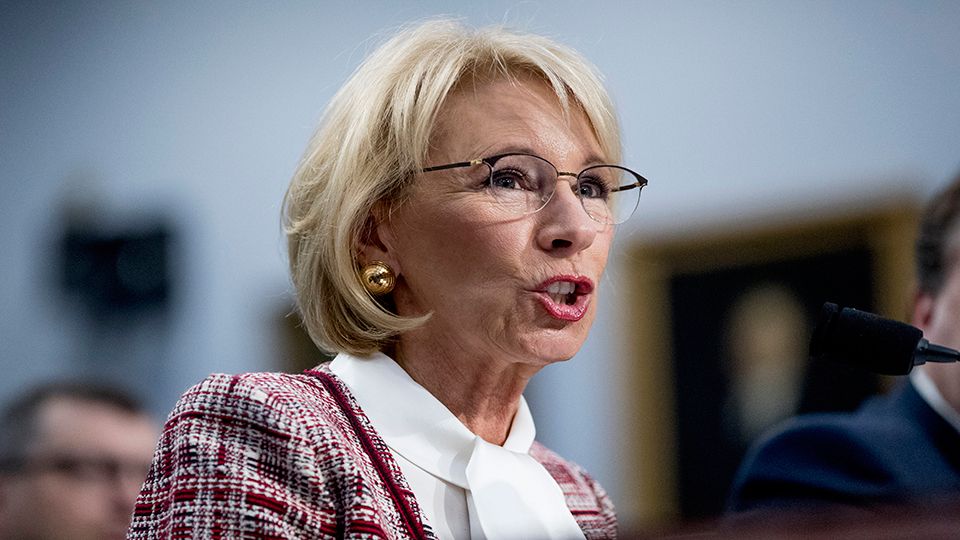 As Betsy DeVos comes to KY to tout "school choice," others say it isn't a good choice

LEXINGTON-- [[Public education is the top expenditure in Kentucky. Many, including Governor Matt Bevin want to change how money is allocated, hoping to implement scholarship tax credits.

At an event in Lexington, Bevin said,  "We've had this conversation here at the state level, about this very same issue. This is a national level version of the same thing, of private sector dollars volitionally for the benefit of those who don't otherwise have the choice to then pursue different opportunities. It's hard for me to believe that in any way shape or form that such a thing could be controversial."

But scholarship tax credits, or "school choice" is a very controversial issue. While the thought is that public tax dollars follow students, Pam Thomas with the Kentucky Center for Economic Policy says school districts have fixed costs where that doesn't apply.

Thomas explained, that at an event regarding tax credits on the state level, "the superintendents uniformly said 'we aren't going to lose, generally speaking, enough students so that we can reduce our fixed costs. No matter if we are picking up one child or 10 children at the end of the street, we've still got to pick them up. And so, you can't reduce those kinds of costs. You can't reduce your building maintenance, you can't reduce your electricity costs."

Under scholarship tax credits businesses and people can donate money to various non-profits that would then give scholarships to private schools, getting a tax write-off for the donation. Thomas worries that donors could actually make money by giving stock and avoid paying capital gains on that donation.

"Generally speaking, when you sell something, you have to pay tax on the capital gains, but if you donate it under a school choice program, then you get the benefit of not having to recognize the gain, plus you get, in the program that was proposed here, up to 90 or 95 percent tax credit."

Secretary of Education Betsy DeVos says that wouldn't be applicable under the terms of her proposed tax credit bill. She said that stock donations do not have a place in her proposal. DeVos said, "It would be whatever their federal tax burden is annually, they would be able to designate up to 10 percent to a 501(c)3 organization, or five percent for a corporation."

At an event in Lexington, DeVos sat down for a round table to explain her proposal. She said, "We call it Education Freedom Scholarships. It would create a federal tax credit to which individuals and corporations could contribute, voluntarily contribute a portion of their federal tax burden annually to creat a five billion dollar tax credit fund at the federal level. States could then elect to participate or not."

The round table was full of people who support scholarship tax credits,  but missing from the conversation were people from Kentucky's local school districts, as well as the main teachers union, and Democrats from Fayette County.

Here is the video of the exchange: pic.twitter.com/bKsnv8keiv

As to why they weren't invited, Bevin said simply "“The people here care about the kids. Every single person that sat around this table cares about the children. Not about funding, not about territory, not about power, not about politics.