The residence hall opened for occupancy this semester and houses student-athletes from men’s basketball, women’s basketball and women’s lacrosse, as well as other UofL students. Named for the Cardinals’ former Hall of Fame men’s basketball coach, the facility is located directly across Floyd Street from the Planet Fitness Kueber Center, the training home of the three sports housed in the new residence hall.

“Denny Crum Hall represents a first-in-class residence hall,” said UofL Director of Athletics Josh Heird. “I would argue no other university has put as much energy and attention into an on-campus residence hall as the University of Louisville.”

“When you have something named in your honor, it tends to commemorate the years of service you’ve dedicated toward something bigger than yourself. And while I’m not sure we could have built a building big enough or nice enough to show our gratitude for all that Denny has given to the UofL community, we tried,” Heird added. 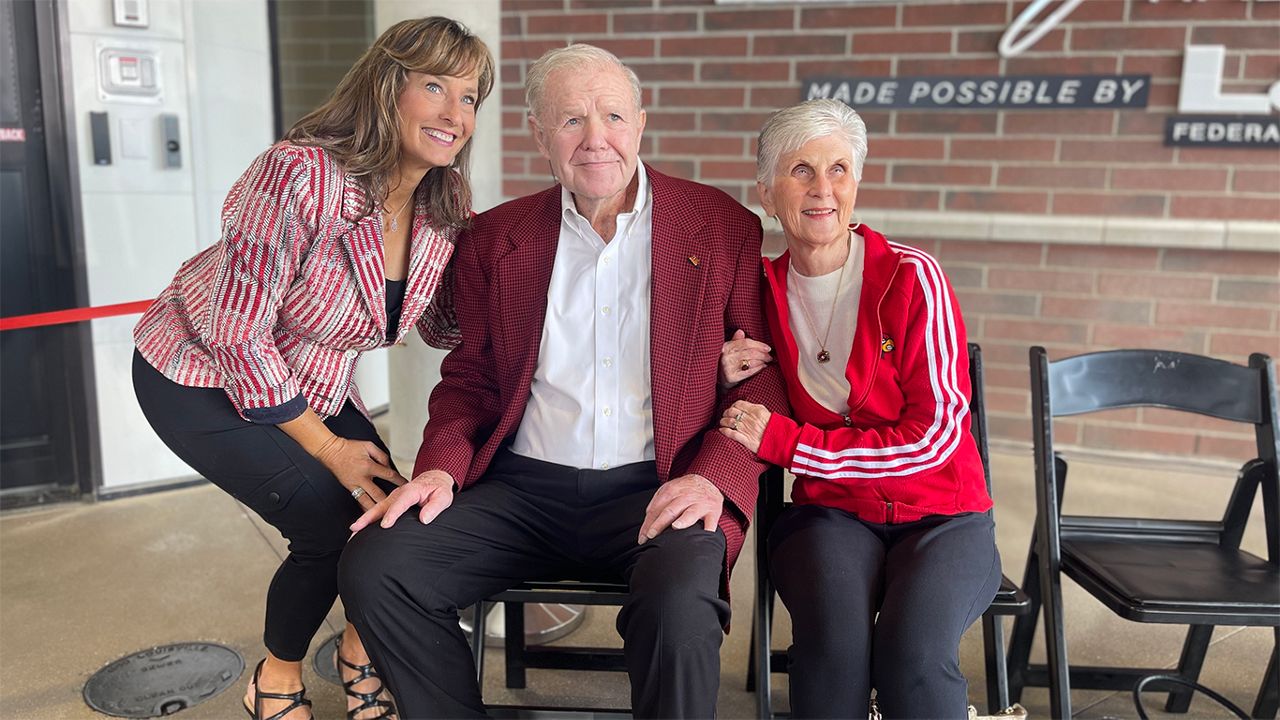 Denny Crum was in attendance for the ribbon-cutting ceremony on Thursday, as well as Darrell Griffith and Roger Burkman, members of the 1980 championship team. (Spectrum News 1/Scott Neumann)

The $23.5 million project is a partnership among UofL Athletics, UofL Campus Housing and a third-party developer consisting of Buffalo Construction, Inc. and Investment Property Advisors, who also developed Cardinal Towne, another campus housing project. L&N Federal Credit Union has provided a $2.25 million gift to the Cardinal Athletic Fund to promote the legacy of UofL Athletics through naming the facility in Crum’s honor.

The five-story, 67-unit facility includes 128 beds, of which UofL Athletics will guarantee occupancy for 63 to remain within the NCAA requirement of no more than 50% of the beds being occupied by student-athletes. UofL Athletics will also guarantee an additional 10 beds to be used by team managers and graduate assistants.

“We know what Coach Crum means to the university athletics program and what he means to the university basketball, but he also means so much to us at UofL,” said Louisville Interim President Dr. Lori Gonzalez. “Every Cardinal fan is familiar with all of his accolades — national championships, Final Four appearances and induction into the Basketball Hall of Fame. But he’s much more than those awards and accomplishments that happened on the hardwood. He’s also a husband, a father, a mentor and a role model.”

“For many years and to many people, Denny Crum has been the face of the University of Louisville, and we couldn’t be more proud of that fact,” Gonzalez said.

The apartments are fully stocked with amenities for college living, and the hall also boasts a Muhammad Ali-themed space on the second flood, as well as an outdoor patio deck on the fifth level.

Crum was in attendance for the ceremony. The legendary coach helmed the men’s basketball team for 30 years, from 1971 to 2001, before retiring after the 2001 season. He led Louisville to the 1980 and 1986 NCAA Championships, ranking as one of only 14 coaches in NCAA history to win two or more titles. Six times he guided the Cardinals to the NCAA Final Four. He was inducted into the Naismith Memorial Basketball Hall of Fame on May 9, 1994.

After his retirement, Crum continued to work as a special assistant to the UofL president for several years. The KFC Yum! Center court has been named in his honor. Since 2001, The Denny Crum Scholarship Foundation and the Denny Crum Scholarship Fund at UofL have awarded over a million dollars benefiting over 425 students. The San Fernando, Calif., native made Louisville his home and has lent countless hours of his time for charitable causes throughout the community for the past 50 years.

“The most important thing is what Coach has meant to his former players, and that’s evident with all of the former players that are here now,” Griffith said. “Coach is the University of Louisville. He’s the marquee trademark of our brand.”

“He’s been there for all of us, for this university and for this community,” Burkman said. “He’s that humble guy that you would never know is a legendary superstar of a college basketball coach. He’s always been, without a blemish, a great mentor and role model for all of us. He’s had such a positive impact on everybody’s life that he’s touched, especially mine.”