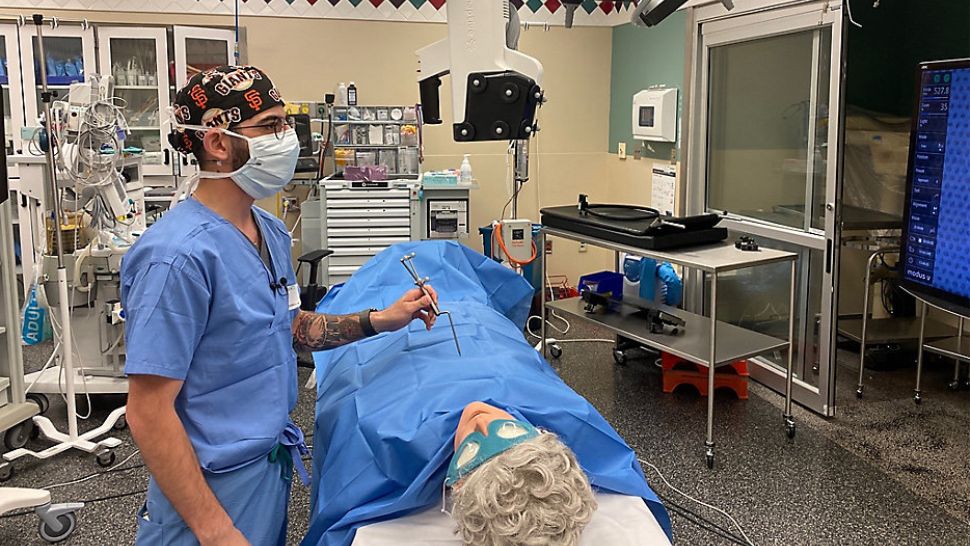 LOUISVILLE, Ky. — There’s a new robot in Kentucky and it’s helping Louisville surgeons be even more accurate and safe.

Edna Evans is a mother and grandmother of 25. The Louisville native worked in corrections and in security before retiring about 7 or 8 years ago. Evans loves to cook and even wants to open her own restaurant someday.

Last year, she said something inside her started twitching. She said doctors couldn’t figure it out. In January of this year, while on the way to a doctor’s appointment, she said the right side of her body—from her leg up to her hip—suddenly stopped working. She couldn’t feel a thing. Then in February, she was at home one morning. She started to stretch.

“When I stood up on my feet, I noticed I didn’t feel it as it was going up. It wasn’t like a pain. It was more like everything died. Like it just shut down.” Evans said. “Everything was dying all the way up to the throat. It went all the way up my arm, all the way up to my throat and everything just froze up. I just started to call the name of Jesus. When I did that, everything started loosening up.”

Doctors said she had a seizure, and she said they wound up finding a tumor about the size of a golf ball on her brain.

“We knew relatively quickly after she came into the hospital that she unfortunately would need to have a surgery to move forward. But we were happy that we were able to catch it at a time where we were able to treat it effectively,” Dr. Brian Williams, a Neurosurgeon and UofL Asst. Professor of Neurosurgery explained.

The team at UofL Health used a robotic exoscope as part of that surgical care. It’s the first in the state and it works to help surgeons plan and visualize their movements with their instruments much more accurately.

“The technology we were using is essentially a very, very high definition camera that can be manipulated and put into different positions. It’s attached to a robotic arm. Then because we’re able to use that instead of our naked eye, to appreciate what is going on, the interface between tumor and brain, and the interface between normal tissue and abnormal. That better distinction and that better definition hopefully allows us to do a more safe and respectful surgery of her anatomy. We were able to preserve the brain more efficiently and take out the tumor more efficiently hopefully,” Dr. Williams explained, about the technology.

“It does help us see where to put the instruments better, whether or not we’ve left any tumor behind, whether or not we’re too deep on the brain on one side or the other. I think if we use this, and we see what we’re doing better, we will have a better outcome.” Dr. Williams explained.

When Spectrum News 1 asked Dr. Williams if the robotic technology has made his job safer, he replied, “I think so.”

“It really feels great to be alive, period.” Evans told Spectrum News 1 while she was at a rehab appointment.

Evans is making progress in recovery and rehab.

“My life is just so much better!” Evans said with a big smile and arms raised in achievement. “Now, I don’t have to worry about a tumor anymore!”

Dr Williams said if you’re thinking about how this technology can help people, he thinks we’re just at the tip of the iceberg.

Dr. Williams said in the future, he thinks this technology will only develop further and further to be something surgeons can use for multiple different things. Like not just seeing with light, but also seeing using specific fluorescent molecules to highlight tumors or blood vessels.